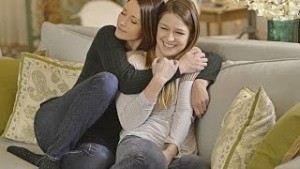 As Kara deals with the death of her aunt, she faces new adversaries both at CatCo and in her superhero life. Alex struggles with the guilt of her decision and Hank’s lie, while James struggles with the ethical dilemma presented by Max’s incarceration at the DEO. Meanwhile, a mysterious figure is kidnapping and executing Fort Rozz prisoners.

Damn damn damn damn DAMN! I’m going to be very transparent here. I was disappointed with this episode compared to episode 13. It felt like a return to the same problematic issues that plagued the first half of the season, and the inconsistency is starting to wear on me. This episode rightfully deals with the fallout of the Astra’s death and the moral dilemma in being a bastion for truth, justice, and the American way, while doing things that, at least according to James deluded view of the country, are decidedly un-American. He seems to forget we live in a world where the Patriot Act and Guantanamo still exist-everything the DEO was doing was 100% the American way, but I digress. James’ delusions aside, the story here is not a bad one.

The problem comes in with Kara and Cat. Her mourning is natural, but its expression is juvenile. Cat continues to act like a mean girl 1/3 her actual age. It’s increasingly frustrating to watch. But let’s dive in, because the episode wasn’t a total wash.

Grand Finale: This episode introduces us to the Master Jailer, a former guard in Fort Rozz who survived the crash and has taken it upon himself to deal with the problem Kara and the DEO seemed to forget about, which was the escape of God only knows how many prisoners. He idolizes Kara’s mother, who he felt was the epitome of justice, except he takes it a step further, executing the captured prisoners even though Krypton didn’t have a death penalty. Kara comes face to face with the embodiment of her future given the angry path she is currently on, as pointed out to her by James regarding her illegal detainment of Maxwell Lord. While slightly heavy handed in its execution, it was a great story about what happens when power is left unchecked. 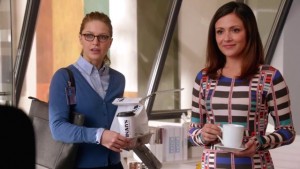 I Can’t Make You Love Me: This episode introduced Siobhan Smythe, also known as Silver Banshee from the comics, as a new assistant for Cat. She is brought in since Kara is so bad at her job. Kara seems oblivious as evidenced by the fact that her plan is to mend the fence with Cat with coffee. While this arc showed us more of Cat being unnecessarily petty, it did give us a new and interesting foe for Kara. Italia Ricci owned the scenes she was in, playing the right mix of ruthless, cunning, and ambitious, which is a stark contrast from Kara’s squeaky clean cut image. While Siobhan was primarily hired because Cat is still mad that Kara dumped Adam and “drove him away”, Kara has been a spectacularly terrible assistant since episode 1. It will be interesting to see if they are playing Siobhan as someone who develops a more antagonistic relationship with Kara on the super powered being side later on, or if she has been tracking Kara from the start.

Eye of the Tiger: Kara finally holds her own against a foe. When she takes on the Master Jailer, she is capable, and gives him a run for his money. He absconds with the prisoner only because he distracts her briefly. Unlike her previous fights where she seemed to be woefully incompetent, she showed a large amount of growth in her ability to take on an adversary in this episode. The fight sequences were not as awkward as before, which was a refreshing change.

What The Deal: Speaking of developmentally appropriate, Lucy has been a great addition to the roster. I like how they are incorporating her in ways that made sense. While the reveal of James secrecy hurt her, the reaction was appropriate for a grown woman. No one wants to be lied to. She reacted the way a hurt and betrayed lover would. I hope we get to see more of her, but not in the way James suggested by revealing Kara’s secret. Which leads me to….

Know These Things: James….you started off so promising, and have been consistent, so I will forgive you this once. HOWEVER. This episode has to be the worst he’s ever been written. While I appreciate him continuing to be the voice of Kara’s conscious, the casting of Mehcad Brooks coupled with the speech he gave her about illegal detainment being a matter of values was completely ridiculous. I am going to say it-if they had cast James as a white man, then I wouldn’t have a problem with his speech about the issue of truth, justice, and the American way being a battle of values. But when you cast a Black man in a role where he has discussed challenges being a Black man in America and put THOSE WORDS in his mouth, you are begging me to either roll my eyes or flip you the bird. His speeches/discussions with Kara were so unrealistic that it took me out of the episode, and their pairing is usually a good one. Then there is the fact that he feels the only way to repair his relationship with Lucy is to give up all Kara’s secrets. How about you just stop lying to her period James? That doesn’t involve telling even more people Kara’s secret. It just means stop being the shifty sucker you’ve been while interacting with Lucy. 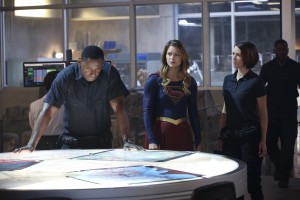 Leave Me Alone: Black History Month is not the time to have Kara addressing Hank like this is 1960, where children could treat grown black folks like their lessers. I completely understand that Kara is mourning, and she should be. I completely understand that Kara would be uncomfortable around Hank since she’s been led to believe that he is responsible for her aunt’s death. Astra was her last living blood relative, and Kara had hope of some reconciliation. Hank (from Kara’s perspective) took that from her. But this passive aggressive and aggressive aggressive disrespect of her elder, and more than that HER EMPLOYER, is simply unacceptable. They have Kara acting like a 14 year old. I know because I have a 14 year old and this is how he tries to act when offended (notice I said TRIES). It goes back to the pattern this show has of writing women with three emotions: happy, sad, or angry. All of the emotions tend to be to the extreme range of expression. Enough already!