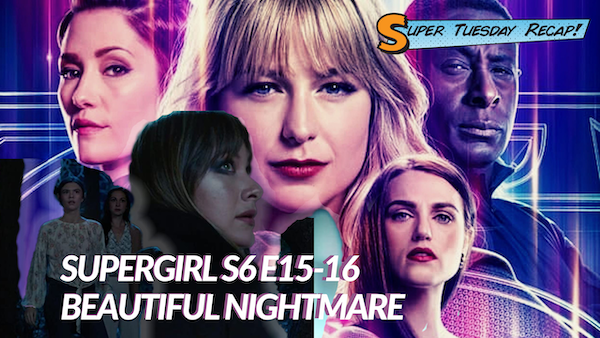 This week Shanna and The Doctor are catching up on two new episodes of Supergirl "Hope for Tomorrow" and "Nightmare in National City".

In "Hope for Tomorrow" Nyxly is still trying to find the totems and realizes that trying to inspire hope is for the birds (ed. note: #relatable) so she'll just let Kara get the totem and force her to hand it over. Nyxly uses the only leverage she can think of, kidnapping William who is the official scribe of the Super Friends. After trying (and failing) a bunch of times, Supergirl and the rest of the team manage to avert a potential nuclear war which gives the world a glimmer of hope and allows them to acquire the Hope totem. Supergirl decides to destroy the totem so Nyxly can never assemble the All-Stone but Nxyly receives an anonymous gift that may turn the tide back in her favor.

This takes us right into "Nightmare in National City". Nia has been searching for the Dream totem and she finds out that her sister Maeve took all of their mom's research books and ran away after their father found out that Maeve told Nia she's not a real woman. Nia has to work with her sister who is a wealth of information even if she is a b*tch. Meanwhile, Nyxly is working with a new mech suit courtesy of Lex Luthor, and when she manages to grab the Dream totem by the skin of her teeth, Lex uses it to reappear. Oh Nyxly, if you thought your father was a problem, you have no idea.

We talk totems, Alex's new role as an adoptive mom, and Kara's burnout all on this week's podcast.