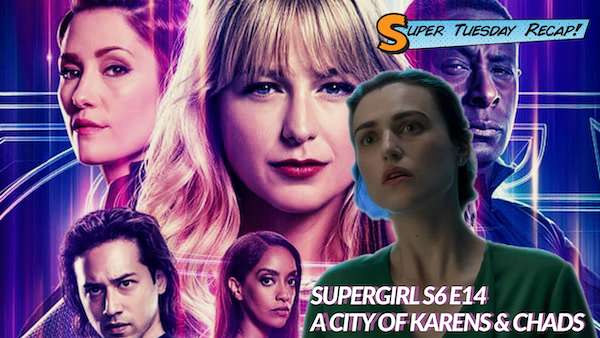 This week on Supergirl, Nyxly is after the totem of humanity and this gauntlet is like no other because while the totem draws the humanity out of the humans around Nyxly, it also channels all that humanity into her. Losing their humanity turns National City into a city full of Karens and Chads with everyone displaying their absolute worst selves. Even the dream couple that Kelly places one of her foster kids with turns out to be the worst when they're caught by an angry mob.

And even though Nxyly has some moments of empathy in this episode, ultimately, she doesn't seem to be fully internalizing the lessons she's learning from her totem trials and it seems like that's going to be the key to truly defeating her brother and father.

Lena, on the other hand, is learning a lot about herself as she tries to master the magic she's inherited from her mother. It's a struggle for her because magic relies on intuition and feeling rather than facts and figures but with William's help, she's able to see past her frustration.

William, you ask? He's finally embedded with the Super Friends and he's granted exclusive access to their headquarters and behind the scenes of their missions. Initially, Kara and the others want to keep certain details of their missions under wraps but they realize that telling the public what's happening will garner more trust than holding back. Andrea (who has low-key become a J. Jonah Jameson-level villain) is still pushing for more. If she keeps going, she's going to end up causing serious damage in her pursuit to sell newspapers.

We talk about all this and more below. And let us know your predictions for the end of Supergirl because we're looking for some good theories about how this wraps up.