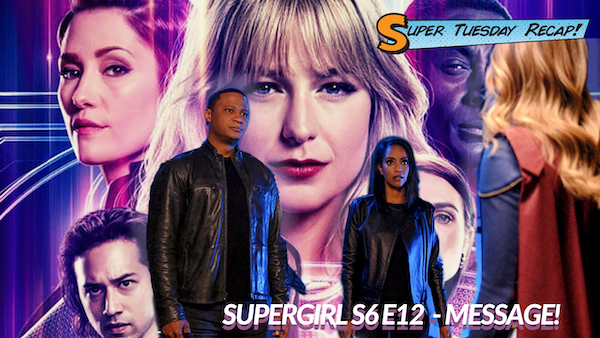 We absolutely loved this week's episode of Supergirl but ... y'all gone get these jokes. Co-written by our own Kelly Olsen (Azie Tesfai), "Blind Spots" is Supergirl's "racial reckoning" episode focused on Kelly's fight to be seen and heard by her teammates whose focus is on giant cats and fifth dimension sized problems that create blindspots (MESSAGE!) to the very real problems that Kelly and Orlando and the other residents of the Ormfield are dealing with.

When Kelly finally breaks down and calls her brother to vent, he sends in Diggle (another Arrowverse cameo from David Ramsey, who also directed this week's episode.) as back up and Kelly and Dig bond about how their everyday problems can be overlooked by their teammates when imps and aliens are around. Although the episode is well done and manages to ride a fine line between superheroing and realism, it does tip over into preachy and prescriptive especially when Kelly talks to her white friends and it feels like she's reading straight out of White Fragility (which also gets a cameo in the show alongside Ta-Nehisi Coates' Between the World and Me).

Overall, this episode does a great job of discussing race directly without the metaphors around Kara's alienness and it's a great reminder that just because you experience some oppression, it doesn't mean you understand all oppression. I do think if Supergirl wants us to buy Kelly Olsen as a superhero in the suit, they need to stop making her an even better superhero outside of one. Listen to us discuss all of this and way more on this week's podcast.