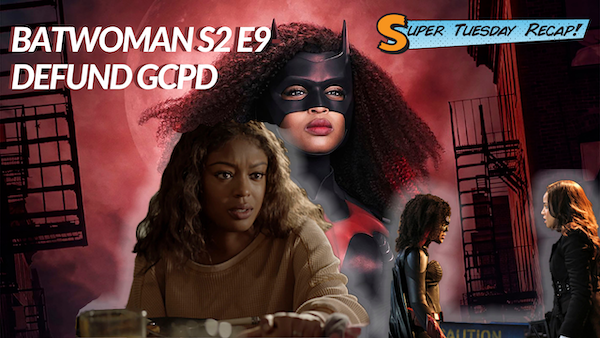 Before Batwoman heads into another hiatus, Shanna, Ro, and Hiroja are back to talk about all the post-Coryana drama in Gotham.

Alice, who is apparently on a completely separate show, is stuck in a liminal space after learning that Kate is dead. Because the stages of grief are just guidelines, Alice decides she's going to skip right over them by telling her brain that she never had a sister. This should be interesting when Kate returns with a new face.

It's okay that Alice is having a full psychotic break because Black Mask AKA Roman Sionis (Peter Outerbridge) is here and he's our official big baddie of the season. Ryan has inherited his vendetta against Batwoman, the Crows, and GCPD, which kicks off when the False Face Gang shoots the police chief.

Angelique was driving the getaway car and Sophie's sister, Jordan, was the sole witness pulling Ryan and Sophie into the mix. Jordan (Keeya King) is an activist and community organizer so she presents an interesting moral dilemma for Sophie who is finally starting to realize that she may not be on the side of right. And, surprisingly, Jordan also challenges Ryan's image of Batwoman as a savior when she questions the "throw a Batarang, ask questions later" nature of what Batwoman does.

Right now Batwoman is settling into itself and despite some questionable glossing over of certain plot points (the Bat Team just has a desert rose plant now? We're not going to investigate how?) using characters like Jordan and villains like Black Mask to bring our character's issues to a head is exactly what this show needs.