No really guys. I don't know if they were hopped on caffeine and no sleep like me but when the Suicide Squad made a surprise appearance at the Warner Bros. Hall H panel, they came to shut the haters down! Director David Ayers shot out on stage like a rocket to let the world know the villains are coming to play. Like the world's best hype man, Ayers came out to say that DC has the best bad guys and he's not here to start any East Coast/West Coast beef but basically the DC Rogues are ready to take center stage. 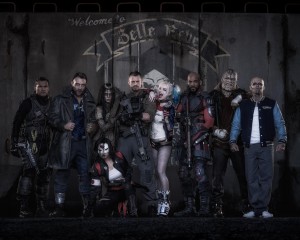 to her superiors. Over shots of Margot Robbie's deranged Harley Quinn, Will Smith's stoic Floyd Lawton and the myriad other members of the Squad, Waller explains how she plans to manipulate these maniacs into a team because that's what she does. The final shot of the trailer is Jared Leto's Joker letting us know he's not going to kill us, he's just going to hurt us ... very. bad.

After the trailer, Ayer brought out the entire cast minus Leto fresh from the set in Toronto. Although they did not have time for questions Smith did grab the mic and tell the crowd to get ready because the Suicide Squad is bringing everything the audience wants and more. It was an unexpected treat and the crowd walked away deeply anticipating what the Suicide Squad will bring in 2016.