The Strain Review: For Services Rendered 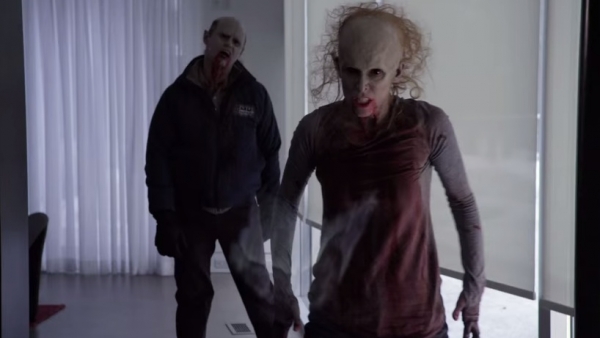 The Strain has officially hit its stride and is firing on all cylinders now. I noted the seemingly slow build and pace the show was taking in its first 4 episodes but knew then that it was just setting up for something big down the line. And the few episodes have rewarded me for my earlier faith. One thing that I’ve really enjoyed about this show is their attempt to keep it realistic. That seems a bit of an odd thing to say when you consider the show is about vampires and the supernatural but when you look at how things are unfolding, it fits. The “slow” pace of the earlier episodes is easily explained in that “shit hadn’t hit the fan” yet. We know that sunlight affects these creatures so we haven’t really seen a lot of public attacks yet because the sun is just starting to go down and the eclipse hasn’t hit yet.   Plus with the Internet and cellular service being down plus the fear of some unknown outbreak, the spread of information has been slowed to almost non-existent. Sure, we as the audience know that there is something seriously wrong going on but the characters on the show aren’t privy to the information we have (at least most of them aren’t anyway). 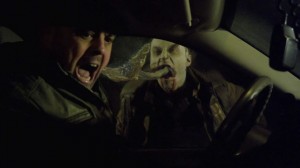 Gus was trying to warn them but no one would listen. To be fair, the officer had a point. I’ve been to New York City and weird shit does go on there all the time. I’m actually convinced aliens could walk around New York City and not stand out.   This is part of the reason why while I laughed at how dumb the cabbie was.  Someone hops back in your cab shouting DRIVE....you fucking DRIVE,  however this is New York City and well....this is normal behavior.  I also thought the treatment of Gus & Felix was pretty accurate. One of the things that I like the most about The Strain is the way that it portrays minorities. In the wake of what’s been going on in Ferguson Missouri, this week’s episode seemed appropriately timed. It’s no secret that black and brown people have a strained relationship with the police. The way that Gus and Felix were treated by the police in this episode (and the end of the last one) both pissed me off AND made me happy. It pissed me off because their treatment just brought up all the anger I was feeling all this week from things going on in the real world. It made me happy though because it really shows how much the show is trying to give a look into how minorities really live. So many times our lives and experiences are whitewashed for the mass audience. It’s good to see that’s not true.

Neeva is my new favorite character on this show. She was NOT trying to go back to that house, she knew better. Her daughter on the other hand is one of those typical young kids who doesn’t want to listen to their parent’s intuition. Oh and those little white kids getting out of the car and running into the house when there was CLEARLY something strange going on? Yup, another awesome minority moment. Not the kids but Neeva’s reaction. She wasn’t getting out of that damn car. Those little kids though and their melanin deficiency meant they weren’t seeing the signs. Almost got everyone killed. 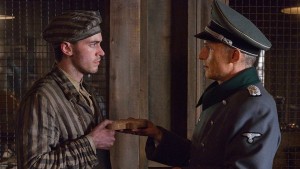 I mean sure, he’s was a Nazi so we knew he was evil. But Eichorst takes evil to another level. At one point when talking to Palmer he says "disappointing that it's no longer a common practice" which was basically his way of saying he misses the days of slavery and forced labor. He also calmly tells Jim that his wife is as good as dead now because of his betrayal. In the flashbacks, Eichorst proves he’s a dick even before he turned into an immortal vampire. Oddly enough his drunken conversation with Young Abraham was actually pretty deep. The whole “it’s easier to do nothing” was some real life shit. I like how they’re slowly showing the history between Abraham and Eichorst. We knew from their intense jailhouse conversation that they have an extensive history together and I’m glad we’re getting to see that. I’m actually going to need to watch these scenes again because there was a lot of things said that give some insight into Eichorst’s character. What he was saying about the German people electing Hitler had a lot of truth in it and I think it made it even more disturbing. Eichorst is becoming one of my favorite villains. Richard Sammel is killing this role.  The best scenes in this show usually involve his character and either the older or younger Abraham.  There's so much tension and hatred in their scenes.  Eichorst won't even address Abraham by his name, just his concentration camp number or...even more disrespectful...as "The Jew".

Eph is a dick 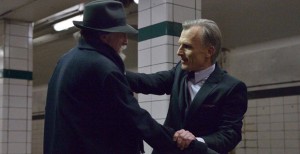 This was NOT "Old Man Strength" at its finest hour

This is a repeated theme but I hate Eph. He’s such a dick. But that’s a good thing. As shitty of a human being Eph is, he’s actually the exact type of person I would want looking into this. At one point Jim is trying to calm down and convince his sick & dying wife that he needed to go with Eph and Eph wasn’t even going to let Jim do that. Nora had to step it. It was such a dick move BUT Eph was right. He didn’t have time for all this emotion. They needed to get their plan in motion to try to stop this epidemic. Eph becomes very binary in these situations and while it won’t win him any friends, it can be effective. He does have control issues though and Abraham doesn’t have time for that. Eph was trying to say that scientifically it didn’t make sense that if they killed The Master the other creatures/infected would die and Abraham basically told him to stop trying to make sense of it all. Making sense of it all is what Eph needs in order to feel control and not having that puts him in a position that he doesn’t like.  I will say though, Abraham's plan wasn't really thought out.  Starlord's 12% of a plan in Guardians of the Galaxy was more robust than Abraham's.  Eichorst is too smart to fall for such an obvious trap.

Sylvia, Jim’s wife, is getting added onto the exception list like Zach when it comes to family members on the show that I don’t hate. I like Sylvia because she called Eph a “self-righteous prick” and told Jim to stop being guilt tripped into doing things for him. And she’s right. Jim did what he had to do in order to protect and save his wife. I still think that’s why Eph punched him. Sure he said he was mad because Jim betrayed his job but that punch didn’t come until Jim said something along the lines of Eph not understanding what it means to do whatever needs to be done to save family. Truth hurts. That cut Eph deep and you can tell he’s still not over it.   This guilt trip by Eph was more about him taking control back from Jim.

"WHO THE FUCK ARE THESE GUYS?????" - everyone's response who was live tweeting The Strain on Sunday.  Shoutout to @CanuckDuke for the term “Vampire Suicide Squad”. I’m not sure who these elite, vampire Delta Force dudes are but they didn’t hesitate to kill Neeva’s daughter over what looked like a minor injury. They mean business. Then calmly told Neeva that they had to cause “she was corrupted.”  Cold blooded….no pun intended. 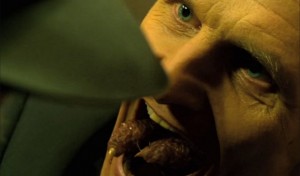 "Kiss me you fool"

With these guys showing up I think it’s finally time for me to talk about something that’s been on my mind since this show started and that’s the connection The Strain has with Blade 2. Guillermo Del Toro directed Blade 2 and in that you’ll remember there was a “new, deadly” strain of vampire spreading: The Reapers. The similarities between those Reapers and the creatures we’re seeing in The Strain is undeniable. I don’t know if Del Toro had talked about this before but I think it’s clear that he wanted to explore the idea of multiple strains of vampires further. I believe he originally pitched The Strain as a television show but it was never picked up so he turned it into a trilogy of novels and THEN it got picked up on TV.   I bring this up now because I thought the idea of the Reapers was a pretty nice idea in Blade 2 and always wanted to see them expand it. While we won’t see Blade, it’s pretty clear that The Strain is granting my wife. We know there are multiple strains of vampires. Eichorst is clearly not like the other creatures we’re seeing and the same goes for these Delta Force vampires. The latter seems to be interested in controlling the spread of the outbreak just like in Blade 2. Remember Blade 2 also had an elite squad of vampires although they were first created to hunt Blade. I think this is really dope to be honest and I’m loving seeing the parallels. I liked Blade 2 but it couldn’t fully explore some of its doper concepts with vampires because it was a movie and had shorter window to move the story linearly. With The Strain we now have at least 2 seasons to full explore this and I think it’s going to be great.

This show just keeps getting better and better. Any fears I had earlier are completely gone. Sure, there are small things here and there but nothing that really matters.   I got a chuckle out of seeing Nora & Eph with guns. They work for the CDC and Eph really doesn’t seem like the type of guy to go out to a gun range and practice shooting. Also, I really need them to go back to Abraham’s place only to find out that Nora’s mom has “straightened” the place up and drained the container with the heart in it and threw it out. Seriously, unless they tied her to the bed, I need them to come back to some fuckery with her. Anyway, this was a great episode and if you’re not watching, you need to get up on it now.