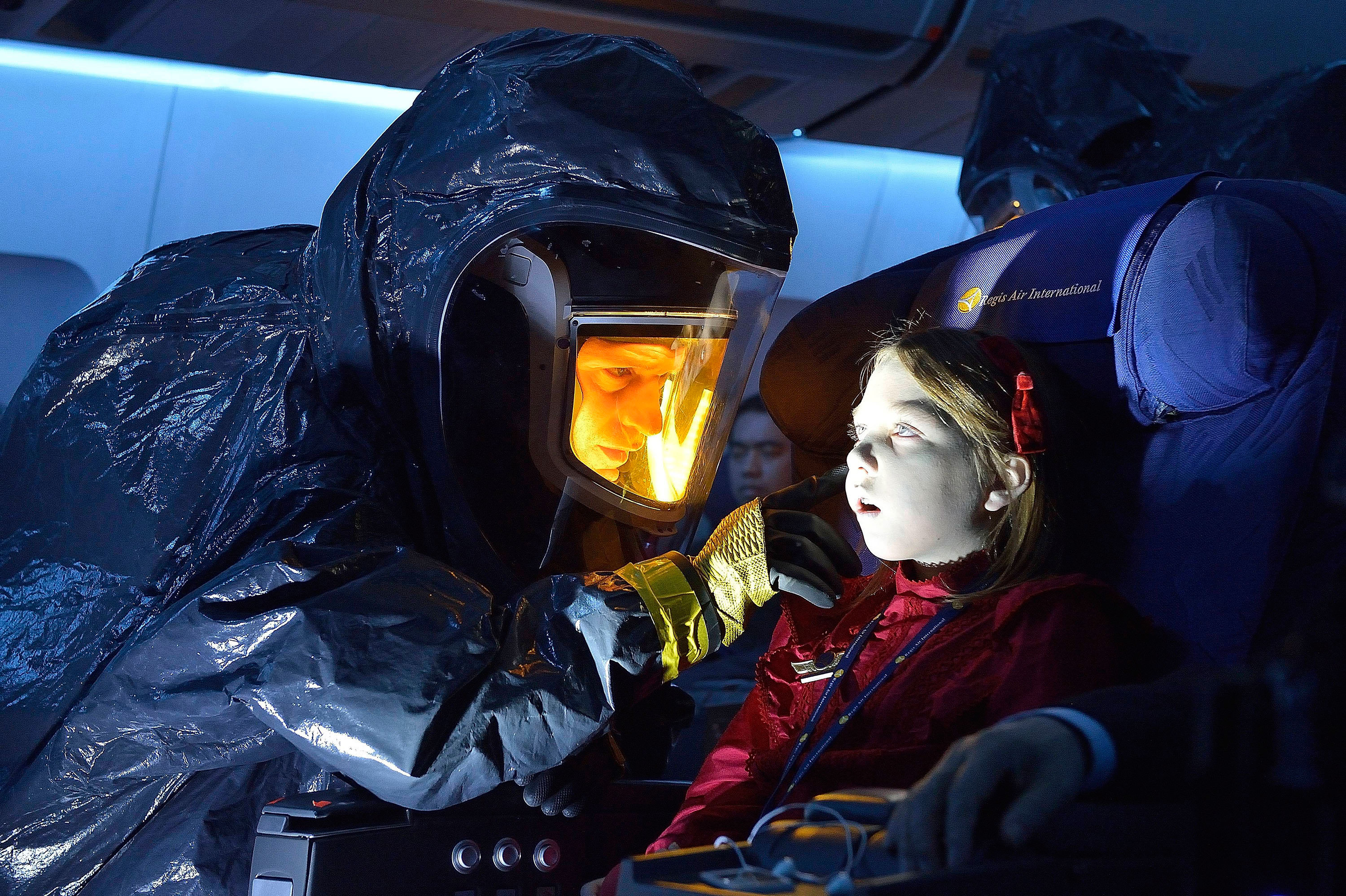 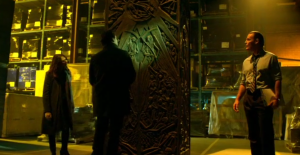 Hand-carved, ancient, box with weird skulls on it, filled with dirt and a latch...ON THE INSIDE...nothing good can come from this

Last night was the pilot of the much anticipated Guillermo del Toro TV series, The Strain. There’s been a lot of buzz about this show even though it’s been heavily shrouded in secrecy. We knew it involved vampirism but that’s about it. The promos for the show were very vague and mysterious. The only thing I was really sure of was that it would be very graphic because FX even took down some of the posters they were using to promote the show because they were deemed too graphic. While the posters didn’t bother me, I could see how a worm-like creature coming out of someone’s eyeball is a bit much for some. Here’s the synopsis of The Strain:

[quote]A thriller that tells the story of Dr. Ephraim Goodweather, the head of the Center for Disease Control Canary Team in New York City. He and his team are called upon to investigate a mysterious viral outbreak with hallmarks of an ancient and evil strain of vampirism. As the strain spreads, Eph, his team, and an assembly of everyday New Yorkers, wage war for the fate of humanity itself.[/quote]

The synopsis doesn’t really give you a lot of details but I knew I wanted to give this show a chance because I’m a fan of del Toro’s work. I believe he’s also directing the first three episodes of the show.   We’ve had some big name director’s associated with shows recently (JJ Abrams, Michael Bay, etc) and they’ve been having mix results. So I was skeptical going into The Strain. However, after watching the first episode, I’m completely on board for watching where this goes.

There are several things that worked for me in this first episode. 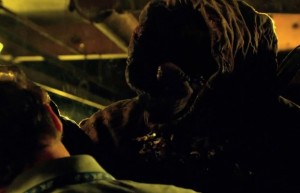 Maybe he just wants a kiss

Scary Vampirism – Can I say how happy I am that this show is trying to bring some respectability and fear back to the idea of vampires? I’m tired of vampires being treated like romantic creatures that glitter and act emo. The Strain is taking a different approach and is treating it like it’s an infectious disease. I think this approach increases the creepiness and fear factor because it adds an element of reality to the situation. Look at how in we reacted to swine/bird flu epidemics over the last few years. Just recently in my area, 2 vials of live Smallpox were found in an old NIH facility. The fear of what possibly could have happened if those vials had been broken caused a little bit of fear of “what if”? So with The Strain saying “What if we treated Vampirism as a virus?” it adds a bit of extra fear to the situation. I can’t remember the last time (if ever) in a Vampire movie or show that they actually tried to explain what happened to the body when a person turned. The Strain is actually trying to explain the “science” behind it and while I can’t speak for everyone, it really creeped me out a few times. Then you add in these “vampiric worms” and you now add in another bit of creepiness to the whole situation. I’m already a fan of bringing fear back into vampires. But the way The Strain is doing it is making it a fear that so much more than “They bite your neck and you turn into one” fear. This is like Outbreak meets 30 Days of Night. It’s an intriguing and gripping concept: “What if this could actually happen?” 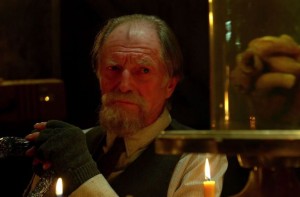 Old Man Strength – When elderly Abraham Setrakian (David Bradley) easily handles two thugs that try to rob his store, I was instantly sold on the character. Then to put icing on the cake, he goes down to his secret lair and feeds a heart in a jar some blood like he’s feeding a pet goldfish. You always need a wise old man who is down to kick some ass in these situations. We don’t get a lot of Abraham in this first episode but it’s enough to know he has a history with these creatures. He’s apparently seen this type of “outbreak” before. And as an old man, you know he’s not gonna have time for anyone’s shit. He has a cane sword. A CANE SWORD. He’s basically Yoda. That would also make Eldritch Palmer (head of the Stoneheart Group) Emperor Palpatine. Sticking with the Star Wars characters, Thomas Eichorst (played by Richard Sammel) would be Count Dooku. The great thing about the characters of Palmer and Eichorst is that they just look evil and like they’re up to no good. I mean the group is called “The STONEHEART Group”. No good can come from that. As a minority, I was slightly disappointed in Gus not realizing that an old, odd looking white man in a suit walking around the hood not appearing afraid is NEVER a good person to get into business with. No matter what he’s offering. 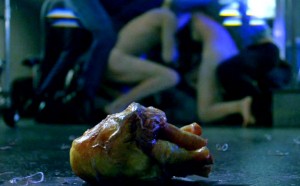 Nothing creepy going on here folks...move along

Graphic & Cinematic – FX normally doesn’t hold anything back but even this was a bit more graphic than I expected. And I loved it. When the Vampire creature mashes Bishop(Andrew Divoff)’s head into the pavement like it was trying to mix Bishop’s brain matter into already hardened ground, it was GRUESOME. Bishop’s head was completely disintegrated and all the was left was a pool of blood and brain fluids.  Then there was the scene in the coroner’s office. First off, you just knew the medical examiner was gonna catch it bad. As soon as Abraham showed up at the airport and said something about “Both the bodies and the survivors need to be destroyed”, I knew that the poor medical examiner who was working alone was gonna be lunch/dinner. But let’s talk about how graphic that scene was. First there were the worms which I already talked about. They look so realistic and the way the interaction with real people is filmed it adds to the creep factor. There’s a real cinematic way this film is shot. Feels more like a movie than a TV show. This was especially true when the “dead” rose up and surrounded the medical examiner. One of them still had his guts hanging out because the body had been opened up for an autopsy. Another had its brain showing. It was a pretty gory and detailed scene. This is up there with The Walking Dead in terms of being gruesome. Even the “passive” scenes are graphic. When Eph & Nora first enter the plane, the bodies on the plane really looked lifeless. It really added to the tension and fear in the scene.

Curtis Manning is Back – I like Roger Cross.   I’m glad he’s on this show. I’m just hoping he doesn’t die a horrible death. He’s been on two shows I really liked: 24 and Arrow.   Both times he’s died. I’m hoping his character, Mr. Fitzwilliams, here on The Strain sticks around. 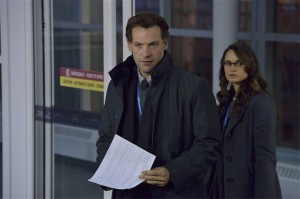 I only had one real issue with this episode and it’s that I started off really not liking Dr. Ephraim Goodweather (Eph). The scene where he’s in counseling and is basically acting like a complete douche just turned me off from the character. To be honest, the whole show started off weird with the dialogue but seemed to settle down after the first 15-20 minutes. But the whole scene with Eph, his wife, son and the counselor was just annoying. Then we later find out that after just begging to stay with his wife (who he has been separated from for at least a year) he apparently had an affair while they were together with his coworker, Nora Martinez (who CLEARLY still has feelings for him). Oh and he’s complaining about his wife not giving him another chance but then when Nora asks if he came clean to his wife about them he not only says that he didn’t but that he also has no plans to.   So he’s a douche. He came off as completely oblivious to the stupid things he was doing in his personal life that cause such turmoil for him. To be honest, with this type of show, I’m just never going to be that engaged or interested in this story about his home life. He’s a workaholic douche whose wife wants a divorce and has moved a new man into the house. I really don’t need any more of them to be honest. I actually hope they kill them off (I knew this probably won’t happen but one can hope). Now normally me hating the main character would be a huge drawback on a TV show but here’s why it’s not: They turned it around in one episode. As soon as they left the family issues behind and let Eph focus on being the Chief Medical Officer for the CDC, I started to warm up to the character again. See, the character is terrible with people. He’s one of those workaholics that is really good at his job but terrible with people. While it makes the family scenes annoying, it’s fine for the scenes when he’s at work. When he was thrust into that press conference in the airport, his bluntness in the situation makes the scene work. I mentioned it earlier, but this show really did start off weird dialogue-wise, like the writing was forced and it was trying too hard. But once things settled (around the time Eph and his team show up at the airport), it was pretty smooth sailing.

That was pretty much my only major complaint. There were smaller things that I noticed but didn’t bother me too much. Like why the SWAT team stopped the van but didn’t notice that the box was CLEARLY in the back of it. I told myself that maybe the SWAT Team wasn’t briefed on what they were looking for. Of course that doesn’t make any sense but hey, I forgot it all when Sam….I mean Jim…reveals that he’s in debt to the Stoneheart Group and helps get the van through the blockade. I also need them to address next episode the fact that Bishop is laying out in the back somewhere, missing his head. Dude died one of the most gruesome deaths I’ve ever seen and no one even noticed he was missing. What a way to go out.

All in all this was an excellent first episode. Even though Eph’s character started off bumpy for me, I was eventually able to come around and fully get into the show. There’s a lot to work with. This pilot actually had a good balance of mystery and giving us answers. A lot of TV shows struggle with that balance because it’s not an easy one. You want to leave the audience with questions so they come back the next episode but you also don’t want them to be confused. I enjoyed this. At 10 pm on a Sunday, this is clearly not the show for everyone (particularly your kids) but I’m going to stick around and see how this unfolds. I liked what I saw and can’t wait for more.