The Strain Review: The Box 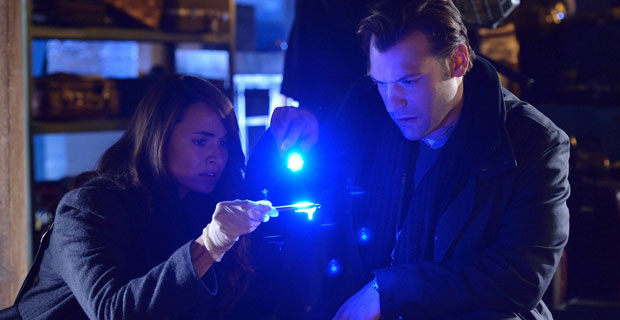 The second episode of The Strain is slower than the first one but that's to be expected. The pilot always does a lot to really grab your attention and the second episode slows things down to start developing characters and plot. This is a hard episode to review because while it is slow, it's clear that it introduces some interesting plot details that could factor into later episodes. But I would be silly not to notice that the episode did feel like it dragged for a bit.

While there are some issues that The Strain has to deal with there's one that stood out to me this episode. It's not really a problem with the show per say but rather with the overall horror genre and how we the audience watch it. There are plenty of times while watching The Strain where as the audience, I think about how stupid a situation is. "Don't open that box", "Don't let those survivors go home", "Clearly this is a bad idea", etc., etc. This is because as an audience, we're aware of situations the characters on the show aren't. It's why I think Horror films/shows have gotten hard to review. The characters on the show have to be written with a certain level of ignorance because without that, we wouldn't have a show. If everyone on a horror show/movie did the "smart" thing that we the audience would do, we wouldn't have anything to watch. I wanted to point this out because this episode has a lot of "Man you shouldn't do that" moments in them. I don't hold those against a horror TV Show or Movie though because almost everything in this genre has those.

This Will End Badly 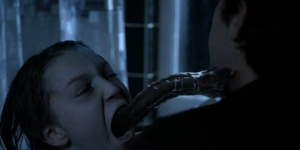 Just like in the pilot, this episode has a lot of "This will end badly" moments. It's clear that this episode was meant to be the slow build up. It feels like not a lot happens even though it does. The first thing was the releasing of the 4 survivors.   At first this seemed odd but I think the issue is that they did a scene out of order. At one point Eldritch Palmer says "a good story always trumps the truth" and I took at as he was the reason the 'carbon monoxide' story was leaked and that was being linked to the cause of the deaths aboard the plane. They might have delayed that scene because it was supposed to be a "ah ha" moment but it just didn't flow that way. But regardless, once those passengers got released you knew shit was going to start rolling down hill. They LOOKED sick. This is clearly the plan though. Allow these survivors to go home and infect more. It does bring up an interesting question though: What's the difference between the survivors and those who died? After Gary calls Eph to thank him about letting his daughter come home, Nora even mentions that the original 4 survivors were thought to be dead and then 'woke up' so maybe these "dead" passengers weren't really dead either. I'll be interested in seeing if there is a difference between the two. The "survivors" seem to be changing a bit slower so I would think that would have some kind of significant meaning. Maybe there are two kinds of vampires: traditional vampires with fangs and proboscis ones. When Gabriel (the goth rock star) and the other survivor were having lunch and talking to the lawyer you could kinda see the changes happening to her. I can't remember the name of the female survivor but her eyes were blood shot and she was bleeding from her mouth like her fangs were coming in. Then Gabriel bit one of the girls back at his place. So it seems like the survivors are going the more traditional route. Emma (Gary's daughter) clearly has a proboscis. Now that's not to say that both the survivors and those that "died" won't morph into the same thing, but right now that's a difference I've noticed so far. 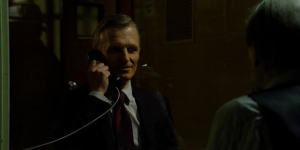 The confrontation at the jail between Abraham and Eichorst was great to watch. If they don't use this concept for the next Wolfenstein game then someone failed. Looking on IMDB, I see that there do have a "young Abraham" cast so I expect us to get some flashbacks. They seem to be implying that Eichorst was a Nazi and they were testing on Jews in concentration camps. But he wasn't just any Nazi but a vampire one. I'm hoping we get a scene like the one with Sebastian Shaw and a young Magneto in First Class. It was a short but intense scene. Eichorst continuing to call Abraham by his number (A230385) and then Abraham ended with some #OldManBars about how he was going to cut up Eichorst and spread his body parts in the north sea next to another vampire. I'm curious as to whose heart they were talking about. Clearly it's the one that Abraham has back at his shop but who does it belong to? 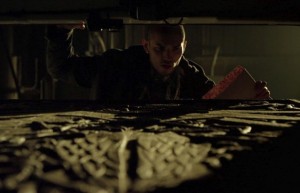 In keeping with the whole episode's theme of putting things in place, I think Gus is going to end up working with Abraham at some point. First off, he has the most realistic moment on this show so far. Once that box started moving he RAN. Top 5 Minority in a Horror Movie/TV Show Response ever. His curiosity got him to look at the box but once he realized something wasn't right, he ran. Wasn't until that moment that I figured I might start liking this character. Gus and his brother clearly "ain't shit" but Gus seems to be the smarter of the two.

I want to point out the brilliance of Kevin Durand's scenes in this episode. He's playing Vasiliy Fet and he seems to be some kind of health inspector. When you first meet him though, you really think he's some kind of bad ass vampire hunter. The reason for this one of the reasons I like this show. They're using practical things to explain vampirism. So Vasiliy has a cabinet with some UV flashlights in it. Not because he's using that to hunt vampires but because that's what he uses to search for rodent droppings. This ties back to when they finally found Bishop's body and Nora was commenting on the secretion left behind. They said it was like bat droppings (bats are rodents) or ticks (that suck blood). It's these subtle moments and explanations in the show that make me really enjoy watching it. I'll be interested in seeing what they do with Durand's character because he seemed to be fully commented to hamming up this character. That's not a negative though. It reminded me of the way Bill Paxton as on Agents of SHIELD.

The Most Annoying Family Ever

Just like the pilot, the scenes with Eph's family are the worst. I hated them even more this episode though because there wasn't a lot of action going on and so these scenes felt like they were just getting in the way. There's literally nothing redeeming about these scenes. They even had the annoying friend of the wife who question's Eph's motives. She really got on Eph for not really know who she was. It's all bad. Honestly, I would rate this episode higher if it didn't have these scenes. I can deal with a slow buildup episode that uses that time to give me setup information for important things. But there's literally nothing about Eph's family I care about. We KNOW he's going to miss the custody hearing because he's in the middle of trying to figure out what's going on with this epidemic. And while his kid isn't annoying, these distractions with the wife and the custody hearing are. I hate his wife. I'm talking Lori Grimes from the Walking Dead hate. Actually, I hate her more than Lori Grimes. Because at least Lori had a reason to be the way she was. Eph's wife is literally one of the worst people ever. I'd be okay if her and her new boyfriend died and the son stayed with Eph. 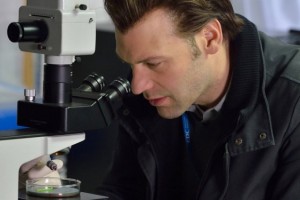 Now having shitted on his family, I enjoyed Eph this episode outside of that. Particularly his "when keeping it real goes wrong" moment when his boss oversteps. Eph knew he fucked up when he grabbed dude by the collar but we've all had that moment at work when a coworker or boss oversteps and you want to jack them up.  I was even cool with the reveal that Eph was an Alcoholic. I want them to build up the character with these things not his family. The show just isn't enjoyable when they show him with his family. At one point while watching I said out loud "I don't care about your family Eph...and neither should you."

This wasn't a bad episode or a insanely good episode. It had it's good moments and it's bad. I feel that the good definitely outweighed the bad and I expect the next few episodes to pick up. You spend most of these episode waiting for something big to happen and nothing really does until the very end. I could see how some people might be unsatisfied with this episode but I'm going to give it a "B-" because I think I can see where they're going with this and if they continue, then I can look back at this episode in a new light.  I could have given it higher but like I said before, the scenes with Eph's family are terrible.  It's not just that I don't like them or care about them, but they just seem out of place.  It really messes up the flow of the show