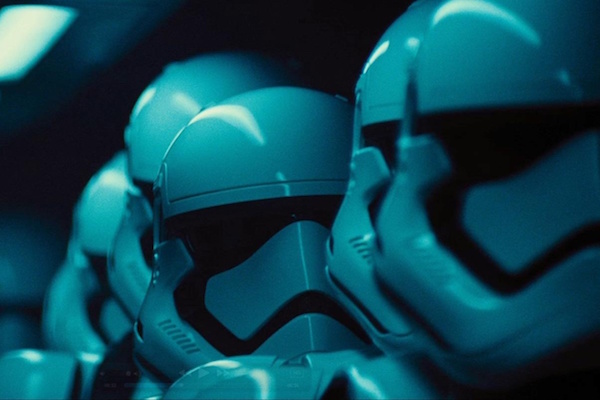 Don’t worry, you’ll be getting an audio review for Star Wars: The Force Awakens from us. We won’t be able to record it until Thursday though and with the embargo up today, I figured it was time for me to actually write a review. What better movie to go back to the basics for if not for the most anticipated movie of the year (or last few years)? The audio review we do on Thursday will include Rod from The Black Guy Who Tips and have some spoilers in it, so for those who want a review from us with no spoilers, here you go. *Edit* The audio review with spoilers is up *Edit*


Now, let’s just get this out of the way: Yes Star Wars: The Force Awakens is great. Not that it matters what I (or any other critic) say because you were going to see it anyway. How could you not? It’s already sold more than $100 million in pre-sale tickets. Everyone is going to see this movie. But hey, if you still want someone’s opinion on it, keep reading. 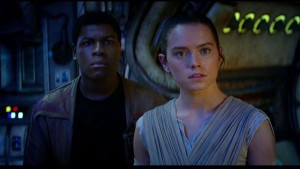 Star Wars: The Force Awakens is everything it needed to be and more. I predicted that it would be my favorite Star Wars film and it is. It needed to bridge the fandom of the prequels and the original trilogy and it does that. Daisy Ridley and John Boyega are two young stars that are exactly what the Star Wars franchise needed to launch itself into a post-George Lucas future and I’m grateful for that. I’ve always believed the biggest thing holding back the entire Star Wars franchise was George Lucas. J.J. Abrams is working with a better cast, a better/tighter script and better technology. This makes The Force Awakens better in every aspect. The icing on the cake is that the franchise is now centered around two minorities (As a whole the film is incredibly diverse).

The Force Awakens pays homage to the original trilogy, particularly to A New Hope yet forges its own path. To be honest, the overall plot of this movie is very similar to that of A New Hope. Rebels are fighting to stop the First Order (remnants of the old Empire). There’s a droid with important plans. There’s a desert planet where all our heroes come together. Han Solo is back to being a lying cheating scoundrel. There’s a Super Weapon that needs to be destroyed. Even a planet (or two or three) get blown up. It’s all there. We’ve seen the general concept before. It would be easy to write it all off as unoriginal except…it is original. JJ Abrams took the framework of A New hope and the original trilogy, removed all the bad, and made a superior movie from top to bottom. First he centered it around two young actors in John Boyega and Daisy Ridley who, as  I mentioned before, can act infinitely better than most of the cast back in 1977 for A New Hope. He removed any parts that really drag (this movie doesn’t really give you time to breath). The action and effects benefit from unique camera angles and shots. So while the overall plot is familiar, there’s so many other layers to this movie that make it its own. There are subplots and mysteries that flesh out the familiar story that give this new one its own voice. The tone of this film is also notably darker than previous Star Wars films (including the originals). Think Empire Strikes Back but consistent throughout (There's no boring middle where you forget what happened). There are definitely some comedic moments but there’s so much death and destruction the humorous moments are just so you can catch your breath for a few seconds.

One of the greatest (and possibly worst) feelings of this movie is that when its over, you will have so many questions. This isn’t as bad as it sounds. We already know that this film needed to seed a franchise with at least two more episodes on the way. The Force Awakens introduces us to characters and potential story-lines that we will definitely be revisiting in other movies down the line. You never find out who Fin is (we only know its not his real name). Rey is a mystery as well. There are many questions about the stormtroopers and how the First Order controls them. How did the First Order come to be? Who is Supreme Leader Snoke and what is his connection to the Force? When you find out the identity of Kylo Ren, you’re going to have even more questions. These unanswered questions (and more) do not diminish your enjoyment of the film, they only enhance your curiosity of what could be coming in this franchise. The only reason this might be a negative is because we have to wait until 2017 to get the next Episode (But don’t worry, Star Wars: Rogue One comes out next year to hold us over). 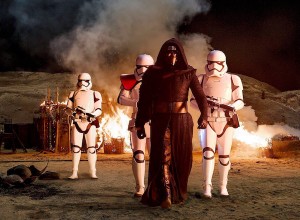 I mentioned Daisy Ridley and John Boyega but they’re not the only standouts in this film. Adam Driver plays an incredible Kylo Ren. Driver’s Kylo Ren is the Anakin Skywalker/Darth Vader we deserved in the prequels but Hayden Christensen couldn’t deliver on. Driver is able to portray a young immature man tempted by the dark side of the force, while also being terrifying without coming off as whiny or annoying. Lucas tried to humanize Anakin/Vader by almost making him appear weak and annoying. Abrams develops Kylo Ren as terrifyingly immature. The kind of immature that when he doesn’t get his way, he might destroy an entire room with his lightsaber in a fit of rage. Add in some different and interesting uses of the force and Ren becomes the young tortured and troubled Darth Vader we wanted in the prequels. His connection to other characters in the movie is shocking and is going to be an interesting development to follow.


One thing that was always hard to reconcile was how in the prequels and other mediums like Clone Wars, stormtroopers were competent, deadly soldiers when in the original series they were pretty much incompetent canon fodder. The Force Awakens rectifies that by not only making stormtroopers competent but terrifying. You watch them slaughter a village and you realize these aren’t your father’s stormtroopers. There’s also an interesting twist with the stormtroopers that is tied to Fin and will be something that is sure to develop over the series.

Action-wise, this movie is incredible. The camera angles used get you right into the thick of battle are some of the things that J.J. Abrams showed off in his two Star Trek films but expands on. Of course seeing this in IMAX is a must but if you can get to a D-Box theater, I would highly recommend it. Everything is shot in a way to make fights very personal. There are not a lot of lightsaber fights in this movie but when they happen, you’re right there in the action but not so close you can’t see what’s going on. Even the X-Wing/Tie-Fighter dog fights are done in an almost claustrophobic way. These aren’t space battles. We’re talking close to the planet surface, skin of your teeth, ship-to-ship combat. X-Wings (And the Millennium Falcon of course) and Tie-Fighters fighting each other, close to the surface of the planet, twisting and turning. Its almost as if you’re on a roller coaster and moving along with them in battle. 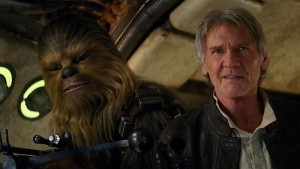 When Disney announced they were bringing back some of the original cast for Episode VII, I was worried. Typically that means a franchise is going to rely to heavily on its past without looking forward. The Force Awakens does not fall into that trap. Han, Chewbacca, Leia and Luke are all smartly used to smartly boost Fin and Rey. It feels like both a reunion and a passing of the torch and it’s done well. There are also some supporting characters that are added in that are sure to get more attention as the series goes on. Oscar Isaac plays Poe, the best pilot in the rebellion, and he doesn’t get a lot of screen time but when he does he makes it count. A lot was made of Gwendoline Christie’s Captain Phasma but she’s probably the most underused character in the film although I’m sure that will be change as the series goes on due to events in the movie. Both Lupita Nyong’o and Andy Serkis play entirely CGI characters (Maz Kanta and Supreme Leader Snoke) and their characters look great. Serkis’ Snoke plays the “Palpatine” role in this film as we mostly see him as a hologram. I’m not sure if we’ll see Maz in further movies but I’m hoping as the characters seems to have some insight into both Rey and Fin.

Honestly, I could go on and on about this movie but the fact is, just go see it. In 135 minutes, J.J. Abrams brings the Star Wars franchise back into greatness. You won’t be disappointed. It's all there. BB8 is the new R2D2, the droid that gives off a lot of personality all with beeps. Gotta love it. And don’t worry, those silly fan theories aren’t true. The trailers don’t tell the whole story and there’s plenty of surprises. So get your ticket already.