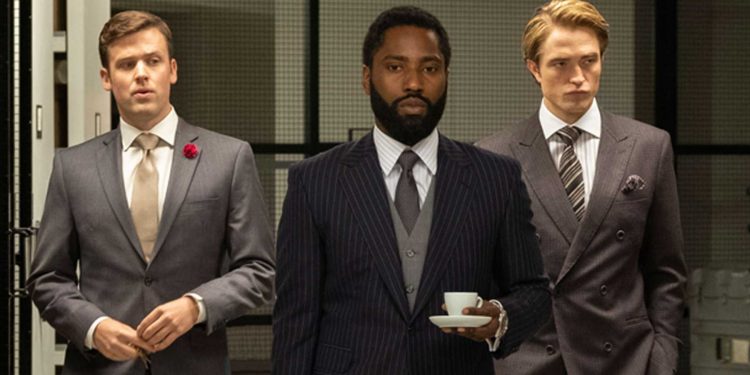 The crew finally got around to watching Christopher Nolan's Tenet. We weren't going to risk catching COVID to see it, but we're  also glad that we finally got a digital screener to check it out. So what did we think of the latest "high strangeness" film from Nolan? Well...we loved it.

There's a few of things to keep in mind before seeing Tenet. First, if you didn't like Interstellar then Tenet is probably going to be a no go for you. With Interstellar, Nolan dove headfirst into science fiction and confusing theoretics. Tenet continues that trend. Now we will say, Tenet is more action packed than Interstellar and does have a Casino Royale feel to it. That might help convert some of the folks that didn't enjoy Interstellar. Tenet has that spy movie feel to it but then in typical Nolan fashion he throws in that Sci-Fi weirdness that isn't always explained (because most times you don't have to full know how something works, just that it does).

Christopher Nolan has put together a quite a "cinematic universe" when you look at his non-Batman and non-war (Dunkirk) films:

Some people think Nolan's films get too pretentious or "deep" but the reality is he has a very simple formula: At the beginning of each film he drops all the clues you need about where the film is going and tells you exactly what he's going to do. Then using misdirection, playing with time and big action set pieces to throw audiences off of what he already told you what he was going to do. He also loves to end his films where he began.

As much as we love Nolan, we also have to admit that his arrogance is also hampering him. We know he loves shooting with IMAX cameras and we love that he does that. However, he refuses to adjust for the fact that this clearly has an affect on dialogue audio. Tenet is yet another one of his great films that you'll find yourself either missing key dialogue from or having to rewind with the audio turned all the way up in order to catch some important thing you couldn't hear. It's been a problem for a while but was extremely frustrating with Tenet, mainly because the dialogue is crucial at times and there's been more than enough time for Nolan to adjust/fix this issue and he just refuses to.

Other than the audio issue, Tenet is great. It's pretty much what one could expect from Nolan. John David Washington does a solid job. He's in a tough position being beside Robert Pattinson and the scene stealer Elizabeth Debicki but he holds his own. This is definitely a film that's going to confuse you and will warrant multiple views. But it's a great ride.