Spoiler Review: ‘Archive 81’ Hints at the future of the found-footage genre 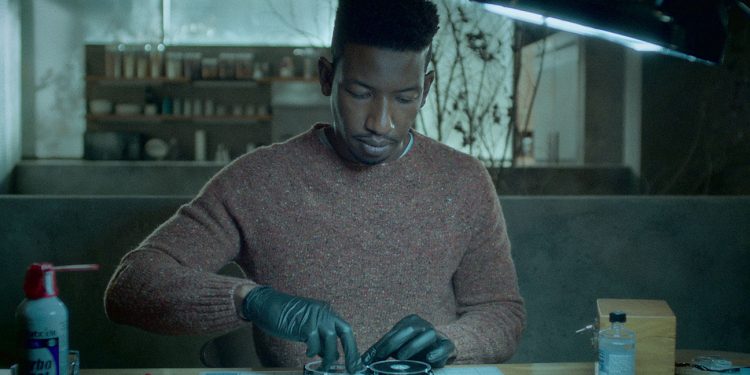 “Hey let me know what’s on those…”

And with a single line of throw-away dialogue, Archive 81 sums up the fascination with archive footage hunting. Bringing back lost things and discovering previously hidden stories. It’s an artform to be able to restore lost things and the memories they hold. Found footage hunting’s also an addictive rabbit hole the unwary could fall down and never work their way out of. Luckily, researchers, conservators, and archivists call that job security.

With a cold open that offers hints of the bleakness that is talented conservator Daniel "Dan" Turner’s (Mamoudou Athie) personal life, Archive 81 sets the stage for a true slow burn. This quick glimpse makes it clear that other than his work as a conservator for Museum of the Moving Image, Turner doesn’t engage with life…or many people. A work assignment to restore a portion of burned videotape turns out to be a favor for Virgil Davenport (Martin Donovan), a donor of the museum. But that favor was actually a test, one he easily passes.

Davenport owns a mysterious conglomerate called L.M.G.. and hopes to lure Turner into accepting a job restoring all the severely fire-damaged videotapes. The catch is, the work must be done at an extremely remote facility in the Catskills compound. Plus, he clearly knows more about Turner than he should. But an unexpected connection to his past pushes Turner to ignoring his misgivings and take the job.  Like any dedicated archivist, Turner’s dead set on discovering what lies beneath all the intrigue and L.M.G.’s apparent interest in him.

Now, if that doesn’t have the makings of a horror-in-the-woods narrative, I don’t know what does. But Archive 81 aims to do more than just dig into the known, unknown. The first episode is a lure for audiences too. There’s fuckery afoot and this twisted intrigue juxtaposes Tuner’s increasingly off-kilter journey with Melody Pendras’s (Dina Shihabi), the young woman narrating the videotapes he’s restoring.

Archive 81 is greater than the sum of it's parts

Rebecca Thomas directs the first two episodes and smoothly blends classic found-footage horror techniques into a picture-in-picture story style creating an eerie and absorbing narrative. The storytelling smartly brings to life the past and immerses viewers right along with Turner. There’s plenty of disturbing backstory told with mood lighting and a trippy perspective-skewing nonlinear plot progression to make for an addictive spiral into macabre and supernatural. It's a locked-room mystery perfect for episodic storytelling as it moves beyond the found-footage reveal into the surreal but very real world.

A few of the steps taken to translate this horror podcast into a live-action series require a touch more explaining than some might find necessary. Archive 81 is very much about a show and tell. So the increasingly sinister ambiance and narrative tone set by Thomas is ably picked up by the subsequent directors and used to subvert many of the standard horror/found-footage tropes as the story transitions to one with elements of the scientific and the profane. Its mixed messages, crossed wires and tightly woven emotional fabric make this imperfect adaptation a worthy addition to Netflix’s original series and its horror catalog.

Listen as Kriss and Ro review and dig into the eight episode first season of the thematically rich and subtly unhinged Archive 81.