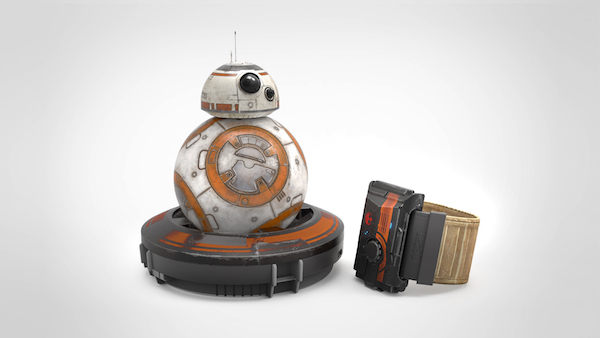 Straight from the Comic-Con floor, the folks at Sphero are showing off the new products for the BB-8 app-enabled droid. The app-enabled droid comes with a higher price tag than the Target remote controlled unit but its features and similarities to the Force Awakens prototype lured many buyers (myself included) to the interactive collectible. 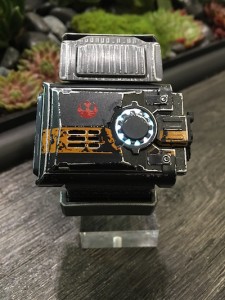 One drawback of the model is that you can only utilize it while the app is open. For someone like me who is always doing two things at once, it gave limited interaction unless I was taking my BB-8 out on a field trip. The new Force Band, will allow users to control and move your BB-8 without using your phone at all. The band is Bluetooth enabled to connect with BB-8 and you can control your unit with hand gestures including giving BB-8 a “force push” to move it forward. This unit will also be great for younger kids who may not have a phone and for parents who are tired of handing over their iPads for them to play.

The band is designed to look like a wrist unit that Rey would wear with a frayed, industrial appearance. And for those who haven’t purchased a BB-8 yet, the new Force Band will come bundled with a new “battle-worn” version of BB-8 which is styled to look like BB’s been hitting the dunes of Jakku. The rest of us early adopters can purchase the band separately. The Force Band and Battle-Worn BB-8 will be available in the fall and to sign up for updates about pricing and availability you can go to: http://www.sphero.com/forceband and check out the demo below.

May the force (band) be with you!