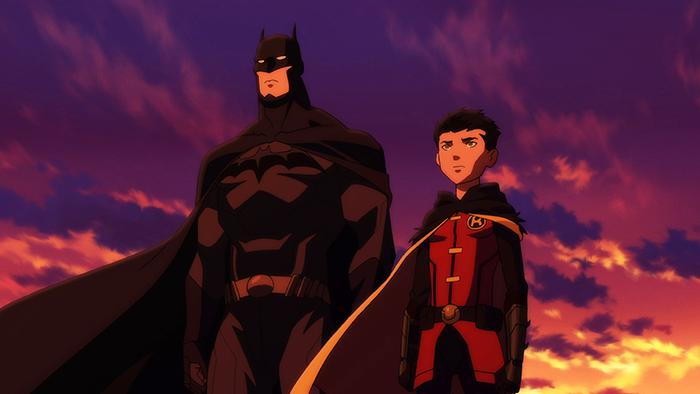 Son of Batman is the second movie (The first being Justice League War from earlier this year) in DC Animations new connected cinematic world of animated comic book films.  While it does have some flaws, overall it carries on DC's record of highly entertaining animated films.  Son of Batman is an adaptation of Grant Morrison and Andy Kubert's 2006 Batman and Son storyline that introduces the character Damian Wayne as the son of Bruce Wayne and Talia al Ghul.

Now before I go into my actual review, while this is a "BluRay Review", I'm not actually reviewing the BluRay.  I decided to switch it up this time and try Amazon's Instant Video option.  The biggest benefit for choosing this option over having the BluRay shipped is delivery time.  The Instant Video option was available for viewing weeks before the actual BluRay disc.  Matter of fact, the release date for the BluRay is May 6th.  My own hesitance for choosing this option was that when I review the BluRay, I like to watch the special features as well and include them in my review.  That's now not an issue because most bonus features are also included in the instant video option as well.  The only missing bonus feature was the first look at Batman: Assault on Arkham City and those "first looks" usually aren't that much anyway.  The one downside I came across was that in order to watch the special features you have to either wait for the credits to end or use guess work to fast forward to the feature you want to watch.  I hope that one day they will either include the special features as a separate stream option or at the very least tell you where each special feature starts in the video so you can jump there immediately.  But that's just a small gripe.  The benefits far outweigh the negatives for videos like this.  I think moving forward I'm going to get all my DCU animated films this way.  There are some cases where owning the physical media is still necessary.  3D movies, collectors editions, etc.  But for these animated films, streaming really seems to be the best option.

Now back to this review.  What I really like about this movie is that it is not a Batman movie.  Sure it involves Bruce Wayne/Batman, but the real focus here is on his son, Damian Wayne.  Damian is the love child of Bruce Wayne and Talia al Ghul.   He was raised by Talia and his grandfather, Ras al Ghul, in the League of Assassin's to be the heir to Ras.  All I could think of

when I saw Bruce facing off with his son was "Damian is a Bruce Wayne  clone who was raised to be an assassin."  It's like a "What If"  character meeting it's canon counterpart.  And it works very well.  Watching Damian size up and judge not only his father but those close to him is just fun to watch.  His interactions with Dick Grayson and Alfred are short but some of my favorites.  Damian jokes about the Robin suit looking a little "effeminate" and that it's only missing lace.  He treats Alfred like a servant and Alfred is not shy about telling Master Bruce his feelings on Damian.  Damian also does something that I never really thought could happen:  He made me care about Robin.  When he puts on the Robin suit, I got a smile on my face.  It becomes even more clear that he’s a younger, more brutal Bruce Wayne when he goes out.  He’s brutal and makes mistakes that I could see Bruce making when he was young.  I really just enjoyed everything about this character and the movie succeeds the most when it centers on him.  And the good thing is, as I said before, this is more of a Damian Wayne story than a Bruce Wayne story.   I also really enjoyed watching Bruce/Batman try to figure out how he can connect with Damian.  For a guy thrust into fatherhood, Bruce actually does a pretty good job of adjusting on the fly with how to deal with his new responsibilities.  Probably has a lot to do with the fact that this isn’t the first young boy that’s been brought under his charge.  When you think about it, Bruce has basically become a seasoned father even before Damian is dropped at his door step.  Damian does bring a different set of challenges (as one would expect from a child raised to be an assassin) but it’s nice watching Bruce figure out the “Damian issue” as if he were analyzing an enemy.

Deathstroke is hot right now thanks to Arrow and this is no different.  It is a little odd to hear a voice for Slade Wilson that isn't Manu Bennett but Thomas Gibson still does a good job.  I liked that they treated this as a hostile takeover, with Slade trying to take over the League of Assassin’s because he felt that Ras passed over him in an attempt to make Batman his right hand man.  I don’t know how much of this is from the actual comic arc, but I liked it.  The Man-Bats part was a little bit out of place but not too much to really throw off the whole movie.  The brutality and bloody violence depicted in other DC Animations is here too.  Deathstroke’s fight with Damian is bloody and brutal. I love the fact that Slade doesn't treat Damian as a kid and really is trying to kill him.  As someone who has never really been a fan of Robin, it was great seeing this little kid Damian in the Robin gear, holding a sword and going toe-to-toe with Deathstroke.

No film is perfect and I did have a couple of issues with this film.  First issue I had was that it seemed like some of the animation was off compared to previous films.  I really disliked the look they went with for Killer Croc.  It almost seemed like Killer Croc and a few of the other scenes had too few details.  There was one point Killer Croc’s scales are supposed to be coming off but it’s just not draw with enough detail for me to really get that.  I also thought there was a syncing issue with the audio and the animation but I stopped noticing it and so I think it might have just been because I was streaming the video (You get 2 licenses to download the movie if you purchase it as an Instant Video).

The second issue I had isn't limited to just this movie but a complaint I've had over all of DC's animated films:  they're too short.  Don't get me wrong. I think they do a pretty good job of cramming as much of the story and characters as they can but most of these films aren't even 90 minutes.  Hell, this one is even shorter than Justice League War.  While I'm listing this as a negative, I understand why we don't get 2 1/2 animated movies.  I think it's a testament to how good these movies are though that i really want to see more of them.  I really would loved to have seen more interactions between Damian and the rest of the Bat-Family.  As i said above, this movie is really about him and the character stands out.  While we get a glimpse of it during the credits, i would have loved to see the full Dick Grayson (Nightwing) vs Damian fight.  I think it would have been something special.

Overall this movie is a 3.5 out of 5.  Honestly, its closer to a 3.8.  The animation feeling off took me a minute to really get into the movie but it's not really a big deal.  This movie being

even shorter than usual really sells itself short.  But that's an ongoing thing with DC Animated films.  In a way it's smart.  I now want to go back and read the Batman & Son storyline now.   I've done this after watching the last two animated films.  So while the films are short, they really motivate me to get back into reading the comic storylines as well.  Despite these small flaws Son of Batman is still a very enjoyable movie to watch and well worth owning.

[tab title="Batman Assault on Arkham"]  This was missing from the Instant Video version but it’s not a big deal.  The trailer for Assault on Arkham is already how and that’s really all these first looks usually are (with a few more comments from the creators here and there). [/tab]

[tab title="The Fang and the Demon Head: The League of Assassin’s Featurette"]  This featurette gives the history behind Ras & Talia al Ghul.  It really goes into how interesting of a character Ras is.  He’s not really in the film a whole lot, but his philosophy is.  I like how they explained that he’s not completely bad but does have a God complex in which he thinks only he has the right answers.  And they go into talking about Talia’s character and how while she can be just as brutal as her father, she also goes against him a lot of times.  This is a really good featurette for learning more about these two complex characters and what their motivations are. [/tab]

[tab title="Strange Blood Ties:  Damian Wayne"]  Grant Morrison and others sit down and really give more insight into the character of Damian Wayne.  I really liked this featurette because Damian was the main reason I liked this movie.  They talk about the  comparisons between Damian and Dick Grayson and Tim Drake.  They compare it as morphing into a bit of a sibling rivalry .   Honestly this just made me wish there was more to the film because the way they describe Damian Wayne’s interactions with Nightwing and Drake’s Robin really wish we had gotten more of that in the film.  I understand why they couldn’t, but now I really want to read the comics to get more of it.  They also explore Bruce's relationship with Damien and how to Bruce deals with him almost as a sensei. A little bit of a spoiler alert though to anyone wanting to get more from the comics, they cover the entire Damian arc in the comics so if you don’t already know what happens, you might want to avoid watching this featurette.[/tab]

[tab title="Designing the Characters with Phil Bourassa"]  I wasn’t a big fan of some of the designs in this movie.  I did however like the update to the Robin outfit for Damian.    Phil Bourassa goes through his process as lead character designer for the movie.  If you’re interested in seeing the design process, this could be an interesting feature to watch.[/tab]