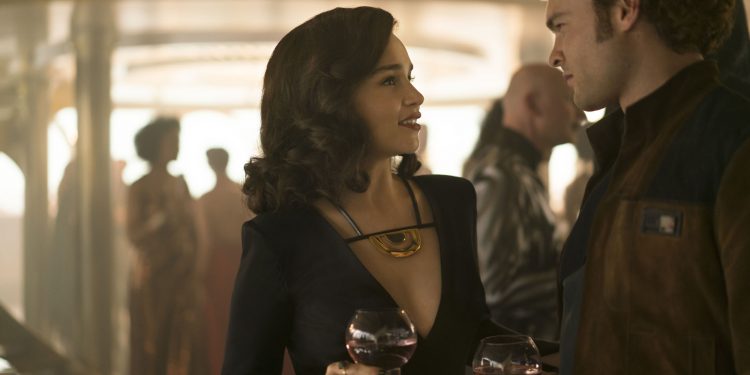 Kriss &amp; Jax review Solo: A Star Wars Story. For all the worry and talk about this film, it's so much better than anyone could imagine. The cast works extremely well together. Most people are coming for Donald Glover's Lando, but they'll stay for everyone else.

Kriss & Jax review Solo: A Star Wars Story. For all the worry and talk about this film, it's so much better than anyone could imagine. The cast works extremely well together. Most people are coming for Donald Glover’s Lando, but they’ll stay for everyone else. Contrary to the rumors, Alden Ehrenreich nails a young, cocky, arrogant and ideological Han Solo. This film basically gives us a Han who hasn’t become completely jaded but also shows us that no matter how much of an outlaw he tries to pretend to be, he’s still a good guy underneath it all.

Woody Harrelson continues to be underrated and Emilia Clarke and Paul Bettany pull in great performances as well. But the real standout is Phoebe Waller-Bridge voicing the radical droid, L3-37.  If audiences thought K-2SO was a scene stealer in Rogue One, wait until they see L3. Without looking at the screen it would be easy to confuse her dialogue for that of a normal human. It’s that good.

What Solo brings to the table is something that a lot of fans might not have expected: Possibilities for other stories. This is a film that has no mention of Jedi or Sith and barely has the Empire in it. Solo shows that the Star Wars universe, even in prequel form, is pretty vast with a lot of stories to tell. Also, it’s very clear that things that happened in the Clone Wars animated series, Star Wars Rebels animated series and the new line of Marvel comic books, are all part of the same canon that the movies are using. There’s a special surprise in this film that is tied to something that happens in Clone Wars (the animated cartoon). It’s clear that Disney is building something special here.

Solo: A Star Wars Story is going to surprise a lot of people. It’s fun, expands the Star Wars lore and at the same time, feels like Star Wars. You’re not going to want to miss this one.

During an adventure into a dark criminal underworld, Han Solo meets his future copilot Chewbacca and encounters Lando Calrissian years before joining the Rebellion.

Please take our Audience survey. It takes 5-10 minutes, is completely anonymous and will help us deliver a better show!