“Senator, You Whipped Out That Mexican Thing Again.” 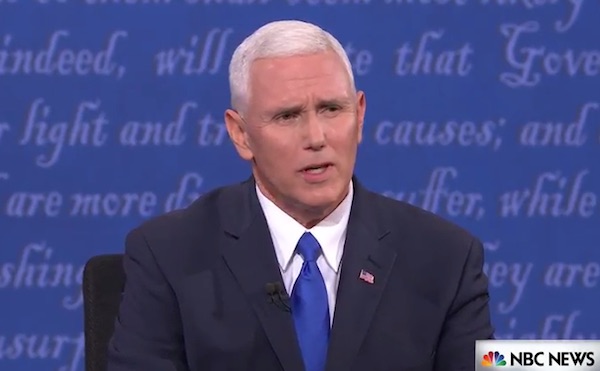 The first and only Vice Presidential debate took place Tuesday night when Virginia Sen. Tim Kaine went head to head with Indiana Gov. Mike Pence. It was the only face to face encounter for two individuals that are largely considered uninspiring Vice Presidential picks for their respective parties. The debate largely was uneventful, but it did show the dangerous evolution of Gov. Mike Pence.

Pence was a mystery to most when he was named as Donald Trump’s running mate in June. Known only to political wonks and those who follow his anti-abortion actions in Indiana, Pence is an unknown quantity to most of the country. As such, he’s the most dangerous man in this race. And he showed that last night.

While Donald Trump is erratic, Mike Pence is a calm agent for bigotry. He’s the evolution of bigots that many have warned about for decades. The bigot that can sit in front of you and calmly explain why Syrian refugees shouldn’t be allowed in his state, or who tries to explain why his personal belief that abortion should be illegal should be forced upon everyone. No foaming at the mouth, no yelling, just cool, calm bigotry.

Let’s be clear about what Gov. Pence is saying here: he believes that his personal objection to abortion, which is rooted in his faith, should be forced upon everyone, even those who don’t share his religious views or aren’t even religious themselves. And this is not just a position that Pence holds in theory, he’s put this into practice through various elected offices he’s held.

Pence has led a “crusade” against reproductive rights. Pence sponsored the first bill to defund Planned Parenthood in 2007, and in 2011, Pence introduced a bill in Congress to defund Planned Parenthood. The co-sponsors of the bill were a venerable who’s who of anti-reproductive rights in Congress, with the likes of Michelle Bachmann, Marsha Blackburn, Ron Paul, and Steve King. The stated purpose of the bill was to, “...amend title X of the Public Health Service Act to prohibit family planning grants from being awarded to any entity that performs abortions, and for other purposes.” Pence stated in an interview at the time that, “if you follow the money, you can actually take the funding supports out of abortion. We then have a much better opportunity to move forward to be a society that says yes to life.” The bill passed the House in 2011 by a vote of 240-185.

Mike Pence’s aspirations to slash reproductive-rights didn’t end with his tenure in the House of Representative, however. Under his governorship, Indiana restricted reproductive rights, which lead to the case of Purvi Patel. Purvi Patel is a woman who was convicted of “infanticide” in Indiana in March of 2015, and faced 20 years in jail when the state deemed that she had sought a late term abortion. The conviction was overturned on appeal and Patel was released from prison in September. What this shows is a prime example of what “a society that says yes to life” looks like. A society in which a woman who suffers a miscarriage wakes up not just to the sadness of losing her unborn child, but also to a police officer charging her for that loss, and to a judge convicting her to spend decades of her life confined to a prison for that loss. That is Gov. Mike Pence’s version of “a society that says yes to life”.

Donald Trump said a few months ago that women who seek abortions should to subject to “some form of punishment”. Looking through Pence’s history, it’s clear why he’s Donald Trump’s running mate.