The 18th annual San Diego International Film Festival offers a jam-packed lineup of 107 films.. The selection's curated from 3000 submissions(68 countries). The festival showcases an eclectic mix of genres with five features in the narrative spotlight competition, 20 in the narrative contest, nine in the documentary competition and 66 short films in total. SDIFF runs Oct 5-20 with regional premieres, panels, and gala events split between the Theater Box, the ArcLight Cinema La Jolla and the Pendry San Diego venues.

The Southern California premiere of Jo Jo Rabbit, opened the San Diego International Film Festival last night (October 15) at the historic Balboa Theater in downtown San Diego. Festival screenings at the ArcLight Cinema La Jolla kick off with Martin Scorsese’s “The Irishman,” starring Robert De Niro, on Oct. 17.  Kriss caught a screening of Jo Jo Rabbit at TiFF so, stay tuned for an audio review from the crew in the coming days.

While its spotlight films, ‘Parasite,’ directed by Bong Joon-ho, ‘The Truth,’ directed by Hirokazu Kore-eda, ‘Ordinary Love,’ directed by Lisa Barros D’Sa and Glenn Leyburn, ‘A Portrait of a Lady on Fire,’ directed by Céline Sciamma and ‘Sea of Shadows,’ directed by Richard Ladkani, Sean Bogle and Matthew Podolsk” further add to the diversity of the year's offerings.

SDIFF always dedicates time and space to issue of social importance. Carrying its theme "The Power of Perspective" forward, this year's slate is no different. Of particular note the film Doing Money, By the Grace of God and the documentaries, My Body is Not A Weapon, Tribes on the Edge and Bellingcat: Truth in a Post-Truth World, tackle sex trafficking, abuse of power (priesthood), the exploitation of women, the plight of indigenous peoples in the face of modern colonialism and journalism in a changing world dynamic head on.

Panel discussions will address the impact of artificial intelligence on the business, streaming services, women in film, and how to navigate the stages of film development as well an entire panel on the social impact of film.

This year's lineup offers film lovers a chance to put together five days of movie watching to inform the mind, up lift the soul, and tickle the funny bone. 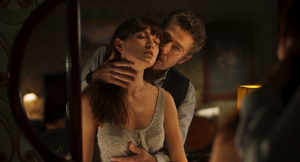 Steven Brand and Andrea Tivadar in Safe Inside (2019)

Synopsis: A young American couple, Ana and Tom are traveling across France. They don't come from money, so when Richard hires them to work on his estate, it feels like a dream come true. In the following days, the dark secrets of the property and its owner start coming to light. One day Tom makes a discovery, which may be more than he can handle. Ana is forced to accept the difficult truth, which will change her forever. Because the worst part isn't the dream itself, it's waking up.

This is "Safe Inside_FEATURE - Trailer" by San Diego Intl Film Festival on Vimeo, the home for high quality videos and the people who love them.

Synopsis: About a stormy reunion between a daughter and her actress mother, Catherine, against the backdrop of Catherine's latest role in a sci-fi picture as a mother who never grows old.
Cast: Ethan Hawke, Juliette Binoche, Catherine Deneuve and Ludivine Sagnier
Director: Hirokazu Koreeda
Not much else is known about this project. So, seats to the first-ever screening went fast. Hopefully I can get in via the rush line and report back.

Directed by : Hirokazu Kore-Eda Produced by : 3B Productions Genre: Fiction - Runtime: 1 h 47 min French release: 25/12/2019 Production year: 2019 Fabienne is a star - a star of French cinema. She reigns amongst men who love and admire her.