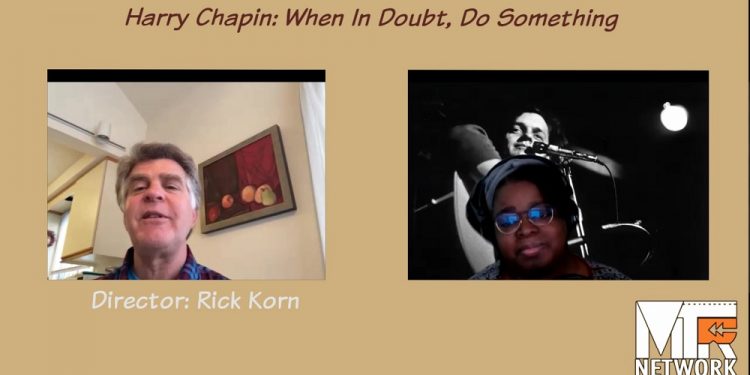 Director Rick Korn took some time to sit down with the MTR Network and discuss his latest documentary Harry Chapin: When in Doubt Do Something. Singer/songwriter and philanthropist Harry Chapin's best known in music circles for his number one single Cat's in the Cradle. But, Harry Chapin, the man, threw his entire self - and his career - in to being an citizen activist. He wanted to end poverty and hunger in the world; he was willing to dedicate his platform, time and energy wholly to the cause.

Interview with Director Rick Korn about his latest documentary Harry Chapin: When In Doubt Do Something currently making the rounds of the film festival circ...

Rick Korn is a film/TV producer, writer, and director who works with different non-profit organizations - including WHYHunger, co-founded by Harry Chapin, - producing fundraising concerts. He's last documentary focused on the rescue and recovery 9/11 workers. During its production, Korn interviewed Chapin's former partner, Bill Ayres. His casual query of Ayers wondering why no one's ever made a documentary about Harry elicited the response, "Why don't you do it?"

Korn discusses bringing this story to life, his person connection to Harry Chapin and what he how he hopes learning more about Chapin and the activism Chapin dedicated his life to will motivate others to stop doubting, and do something.

What Would Harry Chapin Be Doing?

Taking up Harry's mission, like many before him, director Rick Korn and his partners are throwing a free docu-concert to encourage people to get out and vote. TONIGHT, Tuesday, October 20, 2020

DO SOMETHING AND VOTE | BENEFIT CONCERT DOCUMENTARY

The docu-concert benefits over 25 charities including WhyHunger, LI Cares, Sandy Hook Promise, Fealgood Foundation, and Michelle Obama's When We all Vote.

To donate to any of the charities and get voting information, visit https://bit.ly/cauzedosomething.  All donations will be matched.