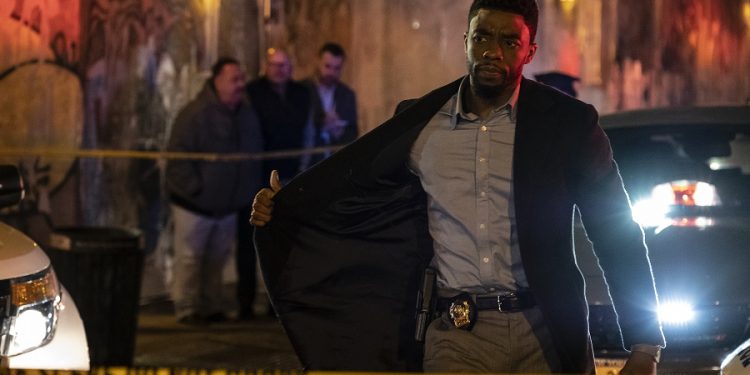 Joe and Anthony Russo used their SDCC panel to talk Endgame (fans finally heard what Cap got up to after returning the stones to their timelines) and answer questions. The pair went on to reveal plans to make a film starring Tom Holland about the opioid epidemic, as well as to produce adaptations of comic property Grimjack and anime property Battle of the Planets (as yet, there's no confirmation of whether or not they'll direct the project). The duo also shared a new trailer from upcoming film 21 Bridges where they act as producers.

21 Bridges is an STX film starring Chadwick Bosman as an NYPD detective conducting a city-wide manhunt for cop killers. While investigating and pursuing the shooters, he stumbles onto a huge conspiracy implicating police officers. In order to determine what's going on and catch the fleeing shooters, he locks down the entire city in a drastic move to keep everyone trapped on the island of Manhatten.

To the delight of fans, it was clear early on that the Russo Brothers' have no intention of slowing down in the near future.

Russo's Onboard to Produce The Thomas Crown Affair remake

For those not into heist films, The Thomas Crown Affair is a 1968 film starring Steve McQueen and Faye Dunaway.  McQueen plays a  bored millionaire playboy out to commit the perfect bank robbery without lifting a finger. Dunaway is the insurance investigator intent on thwarting him.  The film's already seen one remake in 1999 starring Pierce Brosnan only he's an art thief instead of a bank robber.  Talk of a third return to The Thomas Crown Affair's been in the works since 2016 without any real movement until now.

During the panel discussion, Joe Russo said of the project, "this is a movie that we loved growing up, both versions, the Steve McQueen version and the Pierce Brosnan version. And we’re going to bring our own spin to it as producers. We have Matt Carnahan (House of Lies, 21 Bridges) writing the script right now. He’s, we think, one of the best writers in the business, and we have a brand new take on it. We couldn’t be more exciting to be working with Michael. He’s one of the great actors of his generation without question.”

This was one panel that absolutely didn't disappoint.