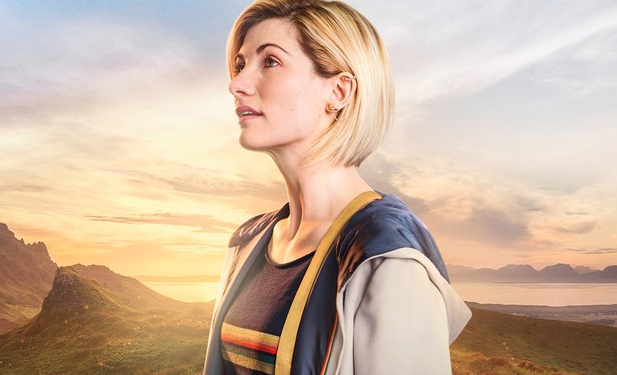 Doctor Who came to San Diego Comic Con, and while we were treated to an official trailer, much of the news about the new season has been closely guarded.

Here's what we know:

The Doctor Will Have New Everything!

We knew after the Christmas episode when 12 regenerated, we would be seeing new T.A.R.D.I.S. since it exploded in that episode.  We've already been treated to the new look of 13, sporting suspenders, a tan trench coat and a rainbow shirt.  Now it appears that 13 will have a new sonic as well.  As she mentions in the trailer, she's having to start over with a new everything, which leads to...

Along with a new outfit, new T.A.R.D.I.S., new sonic, and new showrunner, Doctor Who has hired Segun Akinola to score the new series.  We get a taste of some of the music in the trailer.  Akinola has written many original pieces, including scoring Black and British: A Forgotten History.

Three Companions for the Price of...well...

Thirteen will be traveling with a diverse group this go round. For the first time since the 10th Doctor, a black man will be joining The Doctor on her adventures. Ryan will be played by Tosin Cole (Star Wars: The Force Awakens).  Additionally, Mandip Gill (Hollyoaks)  will portray Jasmin, which brings the total number of women of color companions in New Who to three.  Both Gill and Cole have mentioned their excitement about the increased diversity portrayed on Doctor Who, something they stated wasn't present for them as children.  Rounding out the companion line up is veteran actor Bradley Walsh (Law and Order: UK) as Graham.  While this is certainly a diverse GROUP of individuals to travel the T.A.R.D.I.S., fans should be careful not to dismiss the diversity that Bill (Pearl Mackie) represented in her single season on the T.A.R.D.I.S.  She was the first Black queer woman in the series who was a permanent companion, and that is an accomplishment that should not be overlooked, particularly given the lack of representation of queer women of color in television.

The new season of Doctor Who, slated to premiere in the fall of 2018, will only run 10 episodes instead of the usual 12.  However, showrunners have confirmed that the episodes will be longer.  For the second time, there were rumors that the Christmas episode would be set aside.  However, showrunners did confirm that a Christmas episode was in the works.

Although we are thirsting for information about the new season, given some of the mixed response to The Doctor being female coupled with the increase in toxicity in fandom, it is probably for the best that they keep the details under wraps.  We have seen individuals take single panels from a comic book and create an entire line of articles warping the meaning.  It will be nice to be surprised by the new season and the adventures our gang will go on.

We will be covering the new season of Doctor Who at the MTR Network on our free feed, so stay tuned!