Creating the Sound of A Hero – Scoring Black Panther, Cloak & Dagger and More 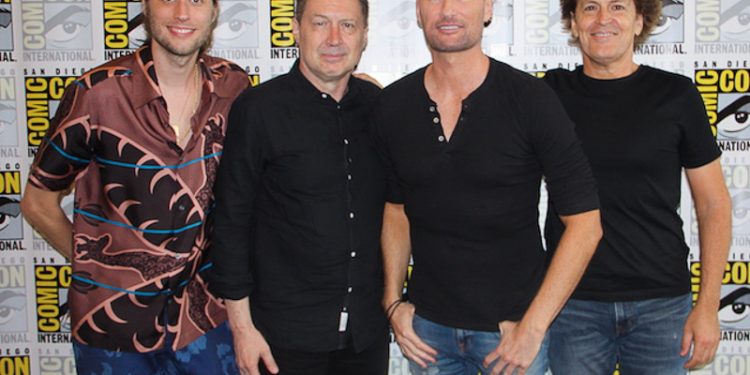 For the 5th year in a row, the Musical Anatomy of a Superhero panel has brought together composers from some of the most popular superhero movies and TV shows to discuss their work. Music is such an important, yet overlooked, piece to the success of superhero franchises. In previous years, the panel brought in composers like Tyler Bates (Guardians of the Galaxy Vol 1 & 2), Blake Neely (Arrow, Supergirl, The Flash), Tom “Junkie XL” Holkenborg (Deadpool, Mad Max: Fury Road), and John Ottman (X-Men: Apocalypse, Superman Returns). This year's panel brought back some returning faces like Brian Tyler (Avengers: Age of Ultron, Power Rangers) and Marco Beltrami (Logan, Wolverine) but also included some new faces for some up coming shows/movies like Mark Isham (Cloak & Dagger),  Jeff Russo (Legion)  and Ludwig Goransson (Black Panther, Death Wish).

MTR had the opportunity to sit down with some of the composers and talk about how they create the musical landscape that defines some of your fave comic book heroes.

MTR: You are working with Ryan Coogler on Black Panther and you've also worked with him on Creed. What is your process like working with him?

Goransson: Well, Ryan and I are friends and we've worked together for a while now, so I'm brought on very early in the process. Like, I'll get the scripts, sometimes before they're written, I'll get drafts and we'll talk about the music and what he's listening to. I'm also involved in the cutting and he doesn't use a temporary score so that makes it harder but also gives me the space to play.

MTR: Since Wakanda is set in Africa but it's also a fictional place what was your inspiration for the music of Black Panther?

Goransson: Since Wakanda is set in Africa but they're also isolated and very technologically advanced, that means I can pull from everything. A lot of the music is inspired by my travels in Africa so there's a lot of percussion and rhythmic drums overlaid with an orchestra.

MTR: You've scored American Crime which is very grounded show, how is that different from a show like Cloak & Dagger?

Isham: Actually they're very similar because the characters aren't yet superheroes. They're still teens and they're just discovering their powers, so it's very grounded. There's so electronic elements that are more fantastical but spare like chamber music.

MTR: The two main characters of Cloak & Dagger come from very disparate lifestyles but they are brought together by these circumstances. How is that reflected in the music?

Isham: The director and I talked a lot about their characters and what's happening internally so a lot of that is reflected in their music but the two teens don't even meet until the end of the first episode. As it goes on they will come together but the music shows their inner turmoil.

MTR: Working on something like Avengers where you have so many characters, how do you keep track of and develop all the different themes?

Tyler: For big things like the Avengers you do have all these individual themes that you have to keep track of introduce but you also have your "team theme" or overall theme. For example, with Power Rangers they're all new characters and it's a contained film I don't have time to create five individual themes for each character. But something like The Mummy when you're creating a possible universe, you do want to plant the seeds for the future.

MTR: Speaking of building universes, do you find that you are often coming into a universe and the themes are already created?

Russo: It's fun. I find that it's harder for me to write a small emotional piece like a love song. The villains have more to work with.

MTR: With the new season coming out, what character or scene are you most excited to write for?

Gotham: Actually, I'm excited to write more superhero type stuff. Now that Bruce is starting to kickass a little more. Before I would write just a tiny piece of something when he'd discover something but now he's moving towards becoming a hero.

Isham: Personally, I'm excited to get out and perform again. I've been listening to some electronic music and this concept of IDM "intelligent dance music" and it's something that is inspiring.

Tyler: Same. I've been performing and touring more and seeing other musicians and live music just generates a lot.

Russo: For the show there's a new character R'as Al Ghul who's a big part of the Batman canon so writing for him is taking some time. But personally, I've been working with a musician out of India, Shankar, who plays the double violin.

Gorannson: Well I've just been barricaded in my studio and probably will be until November for Black Panther but I found a library when I was traveling in Africa in Grahamstown and there's a bunch of field recordings someone made of the different music from the tribes in Africa. So I listen to that for inspiration.