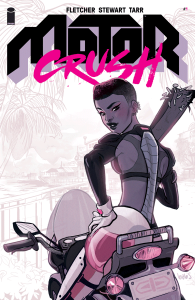 Motor Crush, the brain child of Babs Tarr, Brendan Fletcher and Cameron Stewart, comes right off the heels of their collaboration for DC's Batgirl. Tarr confesses that Willow Smith was her inspiration for the rangy, fierce main character, Domino Swift, but another big impetus for the book was wanting to have a Black woman as the main character. Sitting on Bab's couch in Charleston, "batted around ideas" until they created the story of Motor Crush and the world of racing and juicing that Domino would inhabit.

Tarr's distinctive way of drawing women also lures readers to the book. She carefully considers aspects of her character's style and what that says about them and it's reflected in the book. Domino's style is a mix of cool, skater gear and tough biker chick. Her girlfriend, Lola, is feminine but also a mechanic who knows when to tie her (pink) hair back and get to work. That distinctive style also shows up in the book's layout. Narrative exposition appears as pop ups on page like you would see if you were watching SportsCenter on ESPN. That kind of info immerses you in the world and makes you want to visit the various locations in the series. This storytelling device also harken back to Fletcher and Stewart's use of text messages in Batgirl.

Once the idea of the story is outlined, Brendan and Cameron will start to break down the dialogue and Bab's comes in to breathe life and acting into the characters. Every team's process is different and Tarr prefers to have the dialogue mapped out so she can play with the character's expressions. For them "it's better" this way and allows them to make the pages and characters more complex and fleshed out.

Without spoiling the book, Motor Crush is a lot more complex than a simple racing journey and coming up we get some more backstory of Domino's father, Sully, and his racing career while he raises young Domino. If volume one's brief glimpse of baby Domino and young Sully is any indication, it will be an adorable adventure.

Motor Crush vol. 1 is available now on Amazon and Comixology and at your local comic book shop. 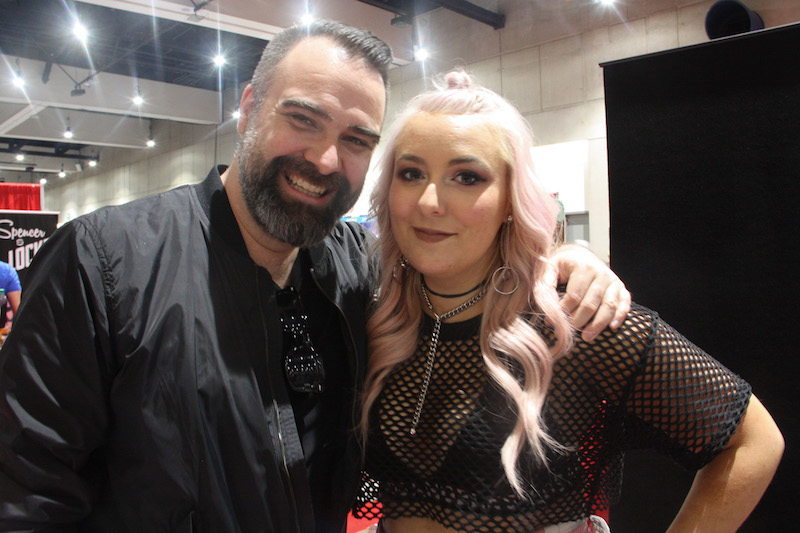