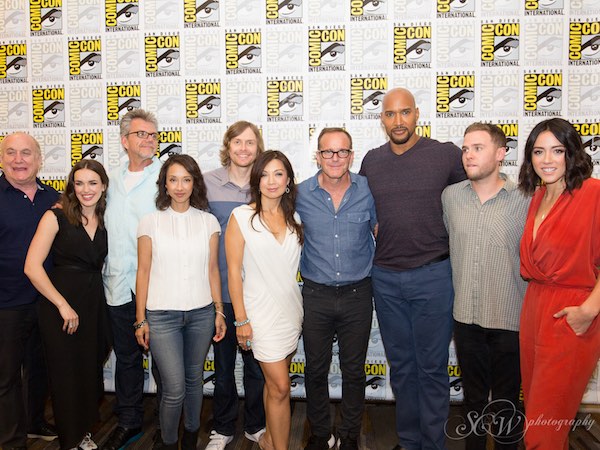 Marvel’s Agents of SHIELD had some major announcements at San Diego Comic-Con 2016.  We talked to the executive producers about the biggest announcement which was that Ghost Rider was coming to Season 4.

[quote] We chose Robbie Reyes because we like to have that sort of dynamic on the show. To use that dynamic on the show, a young Latino kid who grew up in the streets of east of LA and what that means when he encounters our team.[/quote]

The last two seasons, the show has had certain themes that they've focused on. Season 2 brought the introduction of Inhumans while season 3 leaned heavily on the Secret Warriors. So what will the theme be with Ghost Rider joining the fray? Jeff Bell says because Ghost Rider is a vengeance demon, that should tie in pretty well for the arc and journey the characters on the show have been through. But more interesting to me was what Jeph Loeb said about connecting Ghost Rider to the themes of the show.

[quote]We originally started SHIELD as an entity that looked after and explored the strange, the odd and bizarre and determined whether things were dangerous and then had to figure out where they were going to go with that. This to me felt like a very obvious place to go in a sense that this is something that is strange and odd and so shouldn’t SHIELD be checking it out?[/quote]

So it seems that we might see the team get back to their roots of exploring and cataloging the unknown, which is what the show originally started out as. I'm sure there will be plenty more to it than that, but it's still some insight into how they will keep this season fresh.

Besides bringing Ghost Rider to the show, one of the things that is of concern to some fans was the announcement that the show would be moving to 10 pm est. This isn’t the first time the show has been moved. Season 1 aired at 8 pm on Tuesday but seasons 2 & 3 both aired to later 9 pm times. Bell said they “look at it as an opportunity to tell stories a little bit differently and focus on our audiences a bit differently” and that a move to 10 allows them to push the envelope a bit and tell more mature stories. That's something we've seen from the last two seasons of the show. Obviously there is a line with the show being on network TV so it won't enter into the same territory that Daredevil, Jessica Jones and the other Marvel shows on Netflix do. But there is definitely an opportunity for more mature and darker themes which could be interesting considering how dark the last two seasons have gotten.

Check out the rest of our SDCC '16 Interviews with the Executive Producers and Cast here.