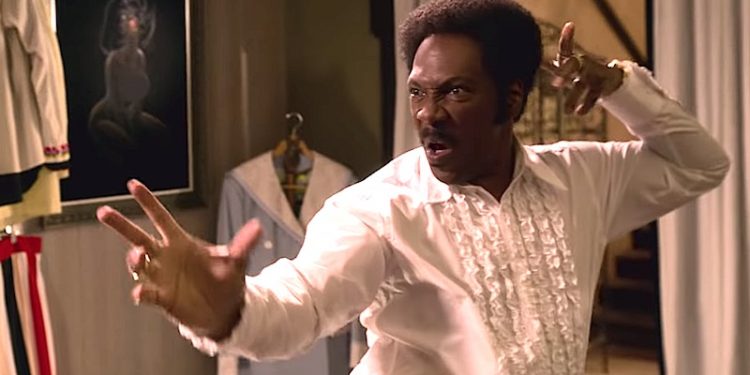 Brandon9
Ro8.5
Brandon and Ro both agree Eddie Murphy and Da’Vine Joy Randolph stand out and bring depth and flair their roles and nicely anchor this ensemble cast, they feel this film is less a biopic and more of an introduction...and that's a good thing.
8.8

Dolemite is My Name Introduces Dolemite not Rudy

The fall film slate looks set to put stories inspired by true events or real people center stage; with an interesting twist. The biopics on the horizon all seem to focus on either a single defining event or such a short period of time it's hardly fair to saddle the project with the term. Netflix Original Dolemite is My Name takes it a step further. Its story's built around this fictional character created by Rudy Ray Moore and the impact it has on his life.

Kriss reviewed Dolemite during the TIFF focusing on how Rudy Ray Moore transformed himself into the now iconic blaxploitation character known as Dolemite. While both Brandon and Ro both agree Eddie Murphy and Da’Vine Joy Randolph stand out and bring depth and flair their roles and nicely anchor this ensemble cast, they feel this film is less a biopic and more of an introduction...and that's a good thing.

Glimpses of the Man Behind the Caricature

Dolemite is My Name showcases community, charisma and the value of satire and caricature. Eddie Murphy portrayal of Rudy Ray Moore solidly revolves around this man's belief that he's going to be a star. This is a man not embittered by previous failures rather embolden by his belief in himself and his desire to prove his detractors wrong.

For all the seriousness stories centering a man desperately seeking fame, Dolemite (like its namesake) is irreverent, informative, and subtly insightful.  This smart offers insight to Rudy's life prior to creating Dolemite but never shifts its focus off its main character. It's refreshingly simple in in presentation and richly complex in perspective. It's easy to miss the under currents amidst the laughter and ridiculous but there's plenty here to make it worth a watch.  Then hit the Google because Rudy Ray Moore's life journey is pretty damn interesting.

Listen to Ro and Brandon talk their likes, dislikes, high and low points in their spoiler-free audio review.