Sundance Review: Honk for Jesus. Save Your Soul 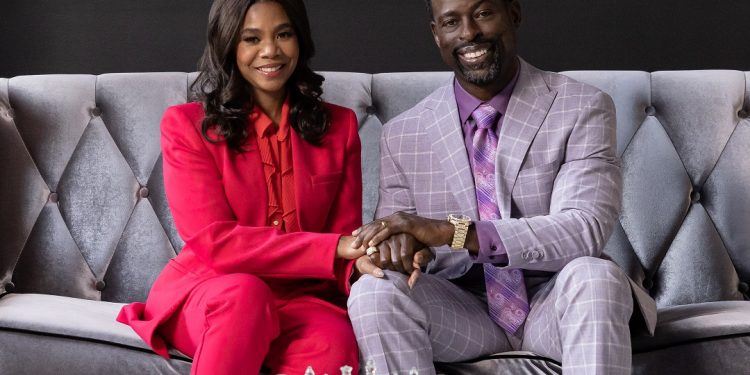 Ro8
Shanna9
Honk For Jesus. Save Your Soul's timely, witty, dark, and offers up breathtaking performances by Hall and Brown. It's giving, art and satirical comedy will (hopefully) never be the same.
8.5

Synopsis: As the proud first lady of a Southern Baptist megachurch, Trinitie Childs carries immense responsibility on her shoulders. Her church, Wander To Greater Paths, once served a congregation in the tens of thousands, but after a scandal involving her husband, Pastor Lee-Curtis Childs, forced the church to close temporarily, Trinitie is struggling to manage the aftermath. Now Trinitie and Lee-Curtis must rebuild their congregation and reconcile their faith by all means necessary to make the biggest comeback that commodified religion has ever seen. *Originally part of MTR's Sundance 2022 Coverage

Written and directed by Adamma Ebo, Honk For Jesus. Save Your Soul, pulls viewers through the side door of the church for a behind-the-scenes look at a ministry in crisis and a marriage at a crossroads. Inspired by the real-life fall from grace of megachurch pastor Eddie Long amid accusations of sexual misconduct, Honk for Jesus goes deep in its bag for a biting commentary on the parasitic relationship between megachurches and the Black community, deification of religious leaders, denial, rejection of the self, and trying to hold on to success at any costs.

Pastor Lee-Curtis Childs (Sterling K. Brown) and First Lady, Trinitie (Regina Hall) are in dire need of some good press. They’ve lost their standing in the community. Amid public scandal, their congregation fled. Now former parishioners, Keon and Shakura Sumptor (played with by Conphidance and Nicole Beharie) reign supreme and they have no intentions of stepping  aside. In the hopes of revitalizing their image as they plan a grand re-opening, the Lee-Curtis hires a documentarian. But what’s intended to be a record of their celebratory return, swiftly takes a turn. Because that scandal upended the delicate balance of this couple’s complicated marriage arrangement too. Unlike the majority of feature films taking aim at religious institutions, Ebo’s dark satire presents (partially) as a mockumentary. It’s a choice that allows the implied (scandal) narrative to work in tandem with an intimate fly-on-the-wall portrait of a partnership under stress.

Offering this narrative up as “story within a story,” is a savvy way to lean into the messiness that is church communities, while keeping the story accessible to a wider audience. Read that back one more time, Honk For Jesus. Save Your Souls is a movie with a specific audience in mind, but everyone is welcome to partake. Just know Ebo’s storyline relies on the kind of sly references, call and response mentality, and church-folk banter that are the hallmark of many a Southern Baptist household all specifically designed to work on multiple levels. If you let it, in between laughing at moments of sheer outrageousness, Honk For Jesus will greatly inform your understanding of Black culture, community, and its complicated relationship with religious hypocrisy and the gospel of prosperity.

A subtly building tension between Lee-Curtis and Trinitie sets the stage for a nuanced take on partnership, love, marital sacrifice and betrayal. Hall and Brown have a kind of chemistry a relationship under pressure needs to sell such over the top characters like Lee-Curtis and Trinitie. Individually and collectively the pair set the tone and masterfully control the ebb and flow of the storyline that deliberately speaks around complicated issues. Juxtapose with the more composed - but no less engrossing - dynamic of rival pastors played with a mesmerizing poise by Conphidance and Nicole Beharie Honk for Jesus offers a not-so-quiet commentary on complexity of morality. Thankfully, Ebo deftly dovetails the more serious moments with the kind of insightful comedic edge that balances rather than breaks that tension.

As this disgraced couple's relationship unravels, Trinitie unresolved pain comes into sharp focus, Honk For Jesus tackles their moment of reckoning in ways certain to resonate and keep people talking long after the credits roll.

Honk For Jesus. Save Your Soul opens in theaters, and begins streaming on Peacock, September 2, 2022

Honk For Jesus. Save Your Soul Post-Screening Q&A Impression

Shanna attended an early screening of Honk for Jesus hosted by SFFilm where director Adamma, her producer (and sister) Adanne Ebo, along with lead actors Regina Hall and Sterling K. Brown, discussed the alchemy that occurred during the making of Ebo’s feature debut.

You just didn’t call cut,” that’s how Sterling K. Brown describes Adamma Ebo’s directing of the poignant and sometimes outrageous scenes in Honk for Jesus, Save Your Soul. Adamma attributed the decision mostly to how much she loves watching the actors stay in character beyond what is written on the page. Ebo shared. that the opening scene, which sets the tone for Regina Hall’s turn as Trinitie Childs was completely improvised by Hall. But by relying on such elements, Adamma Ebo created a hilarious satire with moments that will hit the audience right in the solar plexus. One such moment, in the second act, Lee-Curtis Childs (Brown) gives a deeply emotional speech, only to have Trinitie undercut it with sarcasm so biting you won’t know whether to gasp or howl with laughter.

A self-described Harry Potter and anime fan, Ebo began to question church teachings at a young age. Both she and her sister talk about being taught that sex wasn’t allowed and when the two of them, the children of scientists, asked for clarification about what exactly constitutes sex, they were immediately shut down. It was less about being told what they couldn’t do and more about the unwillingness to engage with the questions. Ebo channeled that feeling of being jaded with the church into a film that pushes you to engage. Honk for Jesus is a labor of love she’s been working on since her early twenties. Not many people can boast a debut with such powerhouse leads, Brown and Hall signed on as both actors and co-producers. The project’s also backed by Jordan Peele’s Monkeypaw Productions (the sisters made clear, horror is not in their future).

Honk for Jesus, Save Your Soul perfectly encapsulates the flawed duality of the southern Black church. At times, the audience becomes Lee-Curtis’s congregation grappling with the question of whether he should be redeemed and Trinitie should stand by him. A place that tells people to come as they are, while judging what they wear. A place that attributes what you have to the Lord while placing the blame for what you don’t have solely at your feet. Producer Adanne Ebo shares, “that’s why we made the film is to have the conversation.”

This film rides a fine line and hopefully will push people to delve into that hypocrisy and deal with it. Because as Adamma Ebo opined, “The church can be great but it can also do better.”

HONK FOR JESUS. SAVE YOUR SOUL. - Official Trailer - In Theaters and On Peacock September 2nd

Honk for Jesus. Save Your Soul. is a satirical comedy starring Regina Hall as Trinitie Childs - the proud first lady of a Southern Baptist megachurch, who to...