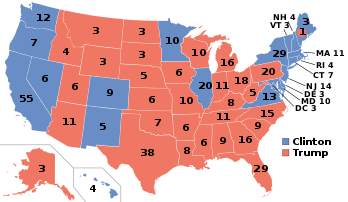 Donald Trump was elected President of the United States on November 8th, 2016. The shock of that fact set in almost immediately. How could a man that has openly sided with, and amplified the talking points of white supremacists end up president? During this time many plans for resistance were formed, among them was the misguided belief that we should turn to the electors of the Electoral College in an effort to have them over turn the results of the election.

Let me be clear here: this is an insanely dumb idea.

Let’s take a step back and explain the Electoral College to those of you who may not know just what it is. The Electoral College is a process, outlined in Article 2 and the 12th amendment of the United States Constitution, separate from the popular vote to decide the President of the United States. The process is set up with 538 persons (equaling the total number of elected Senators and Congress members) not elected to public office who each cast two votes, one for President and one for Vice President. Those votes are then counted and the election results are certified making official the President and Vice President-Elect of the country. These electors are not bound to vote in accordance with the popular vote result of their states, but have never gone against it.

So now on to the misguided plan. The plan, as it is currently comprised, is for large group gatherings in many states on December 19th, which is the day that electors come together to cast their votes for President and Vice President, with the goal of pressuring electors to not vote for Donald Trump as President, but to instead choose Hillary Clinton and Tim Kaine as President and Vice President. Now, I understand much of this argument, Hillary Clinton currently has more votes cast in her name than any Presidential candidate not named Obama, ever, she won the popular vote by almost 3 million votes, and there was massive interference by Russia in the election. All of these are valid reasons to question the legitimacy of Trump’s presidency, but I strongly question the logic of trying to sway electors.

For one, if this tactic were successful, we’d end up giving legitimacy to a group of unelected and unaccountable individuals to choose the president whenever they see fit. The Electoral College is not bound by the Constitution to choose the President based upon how the results of the popular vote in their states, but they have never gone against that. To give them the legitimacy that large group protests around the country would give them in going against the votes cast in their state is shortsighted at best and setting a horrible precedent at worst. Make no mistake, this is the sort of thing that dystopian fiction is based upon. A shadowy organization, that answers to no one and chooses leaders whenever they see fit is not the role that we want the Electoral College to assume. Just because the results of this election were not what we want does not mean that we should give rise to an alternative dark period of history.

If this sort of tactic seems familiar to you, it’s because it is. In fact, we saw it just a few months ago. During the Democratic primary, supporters of Sen. Bernie Sanders, after he had lost all possible routes to winning the Democratic nomination, decided to turn their attention to swaying “Superdelegates” (who they had previously described as “unconstitutional”) as a last ditch effort. Sanders had lost the popular vote by some 3 million votes due to his lack of campaigning in southern states and lack of appeal to people of color who make up the base of the Democratic party. So in this last ditch attempt, Sanders’ supporters decided to create a list of superdelegates to reach out to. This resulted in death threats and harassment as Sanders’ supporters looked to overthrow the will of people of color and women. Ultimately the tactic was unsuccessful and Secretary Clinton was nominated as the Democratic nominee.

This situation bares the echoes of that fight.

So pressuring unelected electors isn’t the best strategy, nor will it actually result in the election of Clinton. So why exactly are people trying this strategy? I believe it comes down to accountability.

The election of Donald Trump lies firmly at the feet of white people. White people came out in droves to vote for the white supremacist candidate in this election. That being said, this tactic reeks of desperation. Rather than simply taking the accountability and doing the work necessary to fight white supremacy in their communities (and quite frankly, within their own families), they’d rather put that energy into half-baked attempts at protest that ultimately will result in nothing. Regardless of the outcome of this stunt, regardless of whether the Electoral College decides that Trump is President or Clinton is President, we still have 59 million people in this country (the vast majority of whom are white) that voted to uphold white supremacy and that can not be erased.