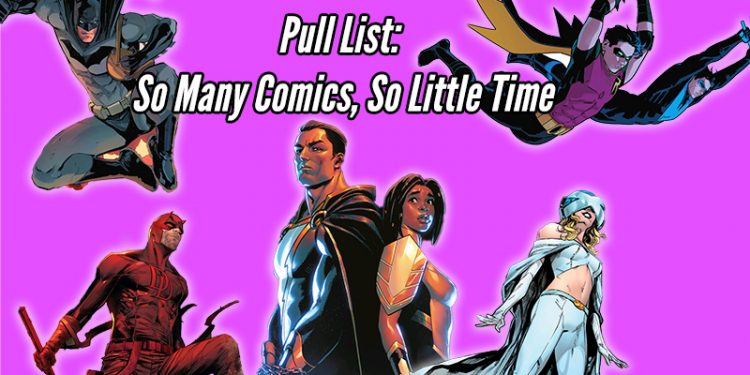 First Character Corner episode of 2022 and it's a Pull List. There are a lot of comics for Kriss and Dpalm to talk about. The biggest problem? There are so many great and good comics out right now. It's really hard to keep up. Of course this is a good problem to have (unless you're on a budget). At this point with so many good books out there, the best thing to do right now is to not only follow titles but writers.

On the DC Side, if you see that James Tynion IV, Joshua Williamson and Tom Taylor are writing a book, you should be reading it. Tynion's Justice League vs Vampires isn't canon but is pretty good. Taylor's Nightwing also continues to be really good. Williamson is on Batman and of course that is good. If you have a DC Universe Infinite subscription, now is a great time to pick up on Bendis' run on Superman and Action Comics as well as the story he's telling in Justice League.

When it comes to Marvel, the Star Wars books are still great. War of the Bounty Hunters has ended and leads right into Crimson Reign. With certain characters from these books popping up in the Disney+ shows, good money could be placed on seeing more of the Crimson Dawn popping up more and more. On the super hero side, much like DC, it's worth picking a few writers to catch up on. Kelly Thompson has been doing wonders on Captain Marvel and it's definitely worth catching up on. Chip zdarsky's Daredevil is fantastic.  If you see anything written by Donny Cates, Jason Aaron or Kieron Gillen, read it. Gillen is actually going to be writing Immortal X-Men come March and after the events of Inferno, definitely can't wait to see what he does there. Gillen is currently writing Eternals (which is fantastic) and considering Marvel is teasing a future Avengers vs X-Men vs Eternals event, things could get very interesting.