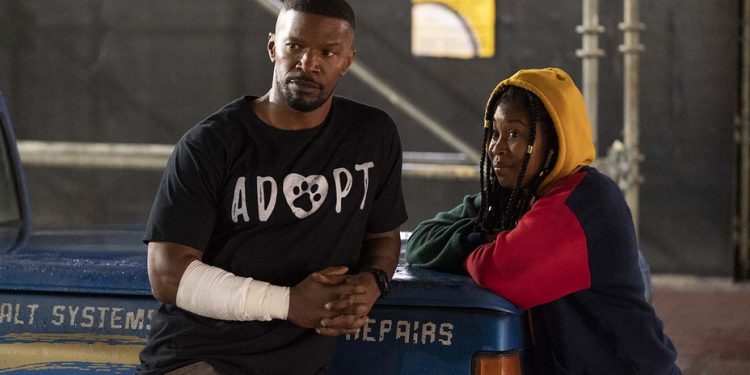 Project Power could have been something special. It really could have been. Instead it's a very forgettable popcorn film that reminds everyone once again why more black screen writers need to be hired. Now that's not saying only black people can write films starring black people. Of course not. But with a film like Project Power, it's clear there needed to be more black voices during the writing process.

The plot is simple. Some secret clandestine group that may or may not be with the government has created a drug that can give individuals temporary powers for 5 minutes. They're experimenting and test running the drug in New Orleans (and other cities) to peak interest in potential nefarious buyers. Dominique Fishback plays Robin, a young black girl who finds herself knee deep in this plot as she sells the drug to help support her cancer-stricken mother. Jamie Foxx plays Art, an ex-soldier who used to be experimented on with the drug and Joseph Gordon-Levitt plays Frank, a cop who has been buying the drug from Robin to "level the playing field" against the rise of criminals taking advantage of these temporary powers.

One of the problems with Project Power is that it's not original. We've seen this movie in some form before. Now that didn't have to be a huge negative if the film used some of the elements in it better. First, Robin should have been centered way more. That would have also required better writing for a young black girl living in New Orleans. For a film that's really about "finding the power within", it does a terrible job giving Robin agency.

Another big problem is the film just lacks any of the historical connections it could have drawn on from the black experience. The fact that Art is a black solider that was experimented on could have triggered all kinds of historical connections that the film just doesn't draw on. There's even an INFURIATING passing mention of Henrietta Lacks that feels like Mattson Tomlin just Googled black names without actually reading the context.

Maybe my expectations were just too high after watching The Old Guard. Maybe I expected too much. Then again, maybe Project Power is just a lazy and forgettable film.