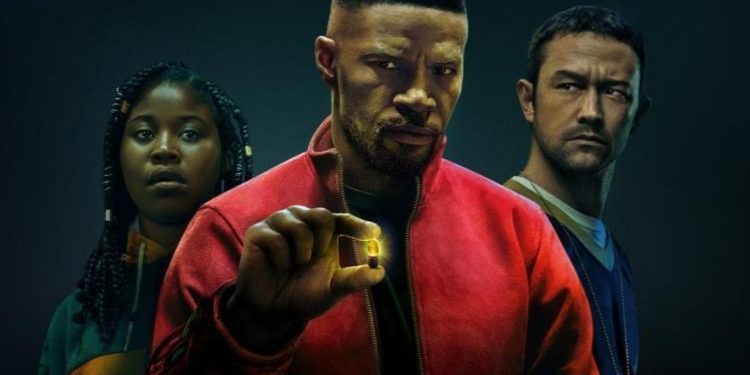 Ro6
In the hands of directorial team Henry Joost and Ariel Schulman (Catfish, Paranormal Activity) and newcomer Mattson Tomlin's screenplay, Project Power fails to be more than an entertaining flick with an occasional glimpse of what it could've been.
6

Project Power: Just One Pill Away

What if anyone could unlock their superpower just by taking a pill? No vat of radioactive goo or spider bite necessary. One pill and the latent power in your cells activates. Would you take it?

This is the kind of question certain to spark heated debate and wish-casting within the fandom. Superheroes and their origin stories - or the desire to have a superhuman ability are a staple story-lines of the comic book movies.

So, it's hardly surprising a script built around that the idea everyone's just one pill away from "unlocking" their power landed a Netflix deal.

Just don't expect Project Power to live up to the hype.

Who's Got The Power

With some atmospheric sleight of hand (and odd lens choices), Project Power gets off to a stereotypical start with a mysterious (white-presenting) man introducing the dealers of New Orleans to the next big thing, Power. This new drug ready to hit the NOLA streets promises the user superhuman abilities. If you survive taking that first dose that is.

No one knows what power the pill will unlock. The options are limitless but the pill's effect is not. Each dose lasts only five minutes. Like all good designer drugs, if you want to keep accessing your abilities, then you're going to need to keep popping pills. So, despite the danger of exploding if you O'd, Power's a big hit as soon as people get their hands on it. 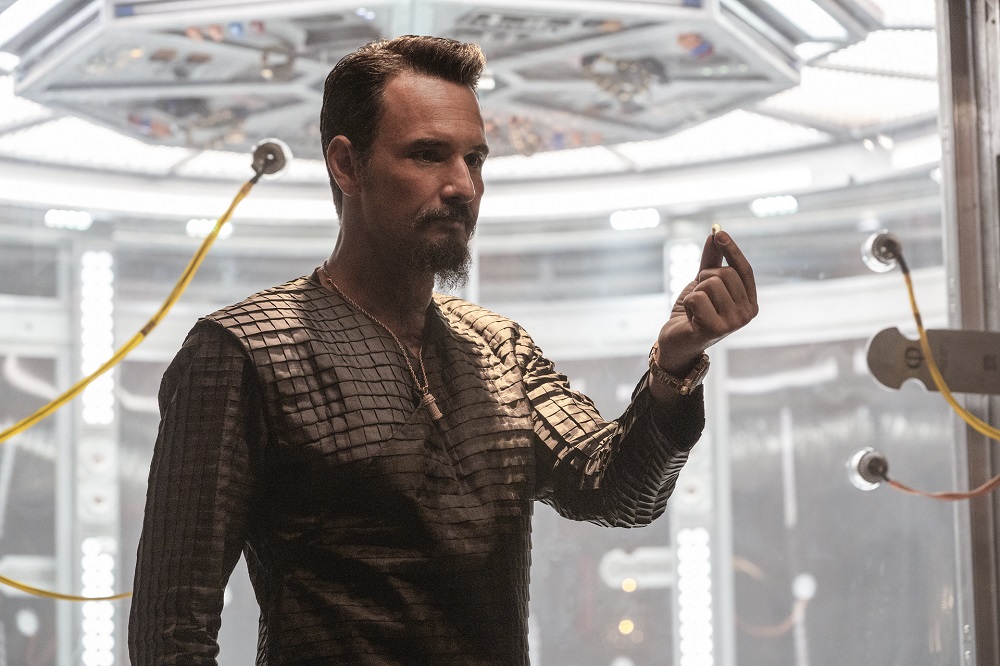 Robin (Dominique Fishback), a high school-age young Black girl, sells Power with homie/fellow dealer Newt (Machine Gun Kelly) as a side hustle. She lives with her diabetic mother who needs expensive care. But they don't have health insurance. Power's price point lets Robin make quick money but selling on the street comes with it's own risks. When a drug deal goes wrong, Robin's rescued by a NOLA police detective, Frank. This character's on-screen introduction adds a bit of levity to a tense situation, it does little to orient you in the story landscape. We soon discover, however, that Robin is Frank's dealer too. He needs Power to hold his own against amped up criminals.

Frank (Joseph Gordon-Levitt), takes Power to regain his edge as a police officer. Since the influx of superhumans, crime's on the rise as the city's beleaguered police force tries to keep the peace. It's hardly a new angle on what would motivate a cop to break the law. To compound the shallowness of it all, Frank's prone to stump speeches based on movie quotes and talking over people trying to clue him into what's really going on.

This portion of the story should've fed seamlessly into what quickly becomes clear is a far bigger conspiracy surrounding Power's sudden appearance on the drug scene. But at every turn, Frank's spouting stilted dialogue, pill popping, and generally bumbling in at exactly the wrong moment. This all just leads to multiple wasted opportunities to dig into this character or the greater conspiracy unfolding in the background.

On one level it works, because - let's be real - showing cops to be just as conflicted and corny as the next guy is never a bad thing. But as a way to build the story and keep it all cohesive and moving forward, Frank's not your guy. Thankfully that failing is also the very thing that keeps this from becoming just another white savior narrative. 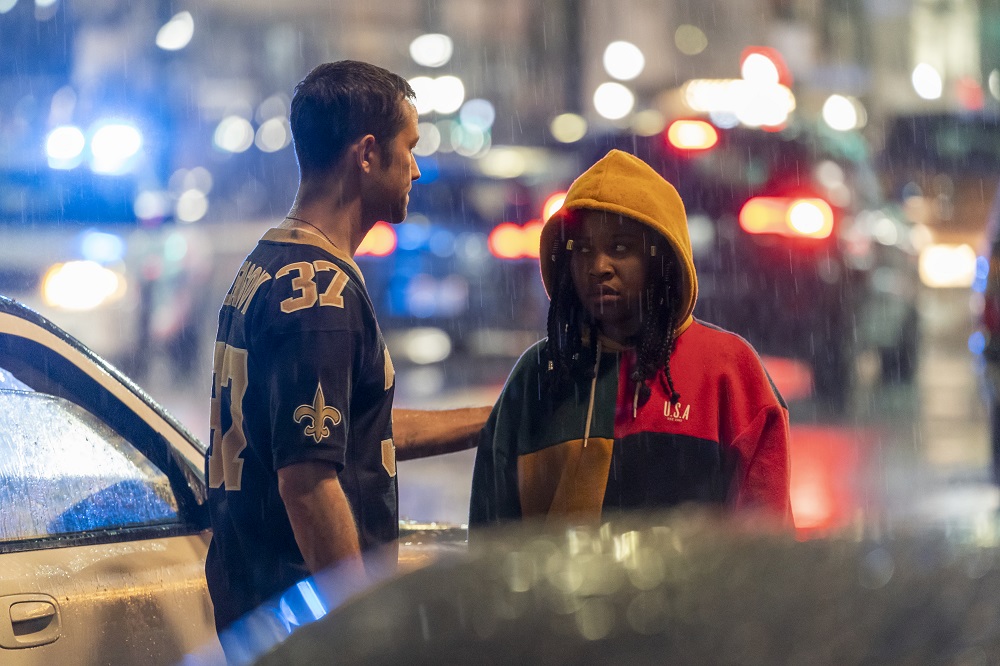 If you can get past the amateurish stereotypes used to craft Robin's core character traits, this smart kid with a part time job and sometimes street hustle works. This is, of course, all owing to Fishback's side-eye laced performance. Her sarcasm grounds poorly crafted conversational gambits creating a flow far better than they deserved.

But Tomlin's seeming lack of familiarity with an actual Black teenager is patently obvious. How this character's designed to respond to authority figures attempting to humiliate her or to finding herself taken hostage makes little sense as character development. The stilted or inauthentic responses frequently detract from the appeal to be found in the character's story arc.

Robin's making on the fly risk assessments, strategic friendships with an eye to always on her survival and a resilient attitude. This character should've been a gateway into the street life in a world changed by Power. Instead a wealth of talent remains untapped and story avenues unexplored.

Robin's motivations are all rooted in negative tropes about Black girls and absent fathers. Despite the fact she's highly motivated and obviously intelligent, Tomlin's script and Joost and Schulman's direction hardly feels like a fresh take on the plucky anti-heroine who gets in over her head. And not just because she's written to be doing poorly in school. Ultimately Robin ends up as nothing more than the vehicle driving the male characters to do and be better.

Fishback and Gordon-Levitt have an awkward odd couple-esque chemistry that keeps their on-screen encounters just this side of bearable. However the male gaze illuminating Robin as a character is both narrow and suffocating.

Just as you think you've got a grip on where this story's heading, enter Art (Jaime Foxx) aka The Major. The Major's come to town looking for the people supplying NOLA's dealers with Power. He's dangerous, mission oriented and completely ruthless. The Major traces the supply back to Newt. But when that lead goes bust (literally), The Major takes Robin hostage intent on dragging answers from her by hook or crook. 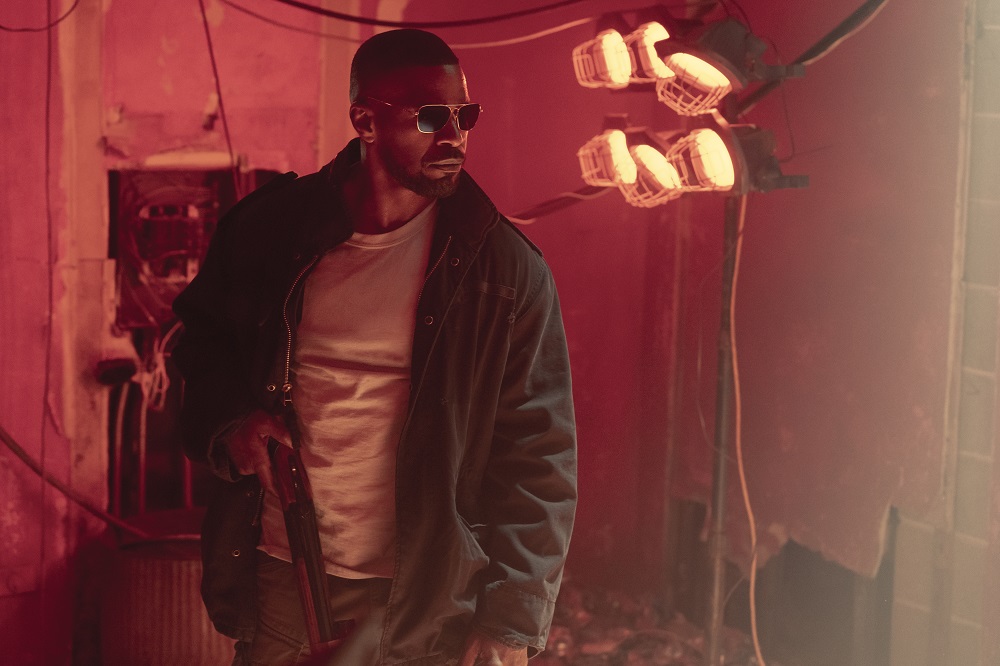 In between all the running, shooting and hand-to-hand fighting, it comes out that The Major is ex-military in town searching for his daughter Tracy (Kyanna Simone Simpson). He's ready to burn New Orleans to the ground to hunt down her abductors and get her back. Robin gets caught between this man on a mission and Frank who's been convinced by his captain (a disrespectfully under-utilized Courtney B. Vance) that Art's a dealer looking to wipe out the competition and set up business.

With the core ensemble in play, everything slowly begins to come to a head. Secrets get revealed, loyalties are chosen, and limits get tested. The big reveal is predictable. The explanations designed to hold the hand of non-white viewers. There's a glossy sheen over the entire project; which just makes the smudges in the paint more obvious.

So, while it's categorically impossible for Jamie Fox not to work as a man intent on saving his daughter. He's charismatic, empathetic, and believable - even while spouting trite dialogue. By the end of it all, you come to realize none of the dueling narratives ever really received their due.

Project Power has a great concept and a solid ensemble cast. It takes place in New Orleans; the perfect city for a plot built on tension and action. Make no mistake, Project Power has it's moments. The pieces to mix that concept with a rich social texture, moral dilemmas and gritty (but relatable) characters into a unique superhero origin are in place. Almost.

This story unfolds over the course of a day. What should feel like a tense thrill ride through a vibrant New Orleans, is instead a disjointed quest desperately in need of focus. Plus, from the outset, it's rather clear the directors' lack experience capturing action sequences (or lighting Black skin properly) because while the fights and gun battles are serviceable, they're frequently (and inexplicably) shot from a third party perspective that leaks most of the energy and explosiveness from the scenes.

There's just one persistent problem overall, Project Power's creators don't know how to tell a coherent story with its foot firmly planted in Black culture, Black history and featuring literal magical Black people. This film needed precision plotting guided by a deft and knowledgeable hand. What audiences get is entry-level storytelling, rudimentary visuals, and socio-environmental commentary delivered with a sledgehammer.

Be Ready or Beware

Comic-book stories offer a rich landscape for visual storytelling opportunities, but it can be an unforgiving medium for the ill-prepared. It's not enough to love comics. It's not enough to have an interesting idea with timely messaging or compelling characters.

Unfortunately, in the hands of directorial team Henry Joost and Ariel Schulman (Catfish, Paranormal Activity) and newcomer Mattson Tomlin's screenplay, Project Power fails to be more than an entertaining flick with an occasional glimpse of what it could've been.

If you don't have the range to tell the story, nothing will hide the flaws and missteps in the final project. Not even casting Jaime Foxx and Joseph Gordon-Levitt. C+

What would you risk for five minutes of pure power? On the streets of New Orleans, word begins to spread about a mysterious new pill that unlocks superpowers unique to each user. The catch: You don't know what will happen until you take it.

Project Power debuted exclusively on Netflix August 14, 2020. When it's finished, I highly recommend cuing up Freaks for a story that truly does rethink the superhero narrative.