We’re back for part 2 of our Character Corner series on the history of Peter Parker as Spider-Man. Our first part covered the teenage years of Peter Parker, the death of Gwen Stacy and the original Clone Saga. This second part covers even more as Peter grows up and as Marvel increases the Spider-Man brand. By this time there are now four ongoing Spider-Man titles:

We tend to oversimplify the love life of Peter Parker into just Gwen Stacy and Mary Jane Watson. But the truth is, Peter not only had a very complex love life, many of the women in his life stick around and have a big impact on his life. When covering his teenage years, you see Peter deal with Liz Allan, Betty Brant, MJ and obviously, Gwen Stacy. Moving forward into his 20’s, these women continue to be involved in various ways. Liz becomes the wife of Harry Osborn. Betty marries Ned Leeds and later has an affair with Flash Thompson becoming tangled up in the saga of the Hobgoblin. 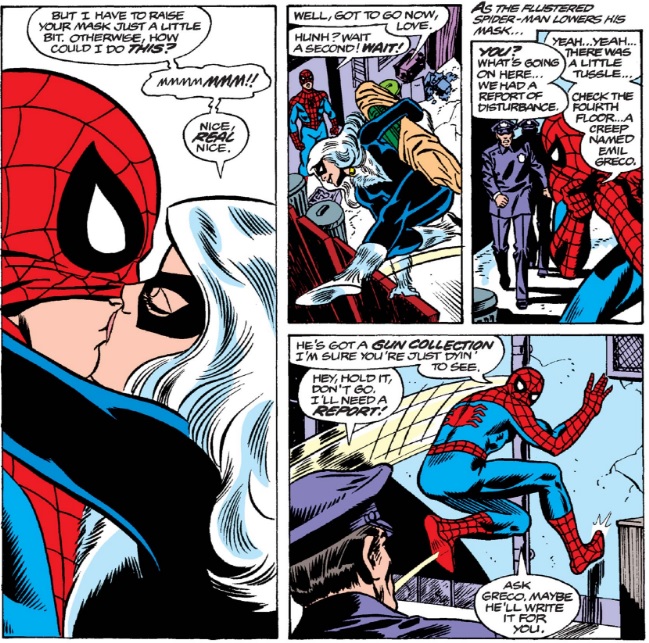 This time also adds in Felicia Hardy, Black Cat. Felicia becomes almost a kindred spirit for Peter at this time when they first fall for each other in their costumes. Spectacular Spider-Man issues 73-79 take place during the war between the Owl and Doctor Octopus and Spider-Man & Black Cat are caught in the middle. It’s during this time that Peter confesses that he’s fallen in love with Felicia. Peter also really pisses of Doctor Octopus after he rips out his mechanical arms. Octavius then vows revenge against Peter and Felicia in a chilling panel. 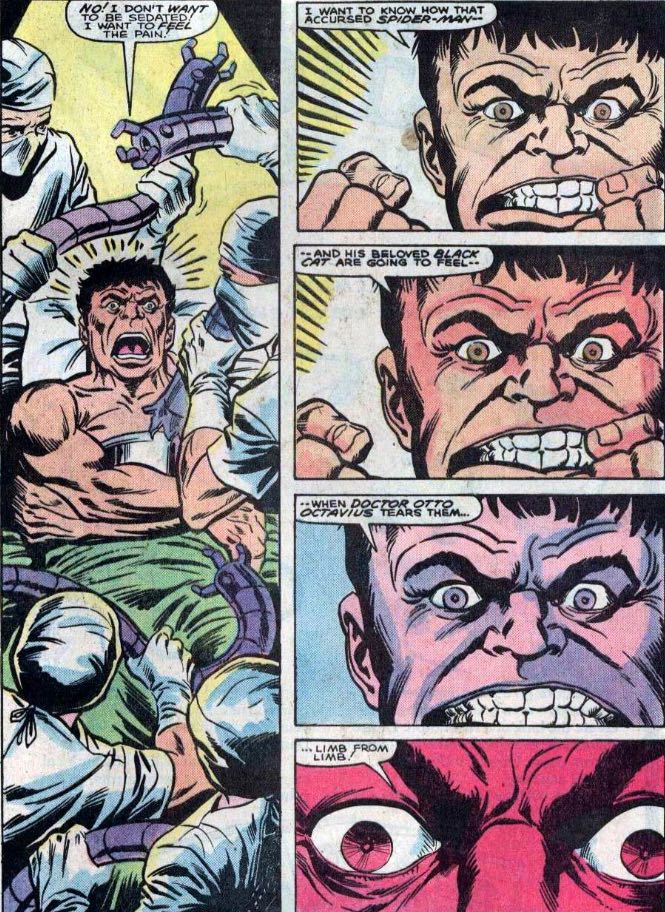 Peter frequently bounces between Felicia and MJ during this time not knowing who to really settle on. He eventually ends up proposing to MJ (after a previously failed attempt) and they get marred in Amazing Spider-Man Annual #21. But during this issue you see that Peter still struggles with leaving behind the memory of and moving on from Gwen Stacy.

The Death of Jean DeWolff 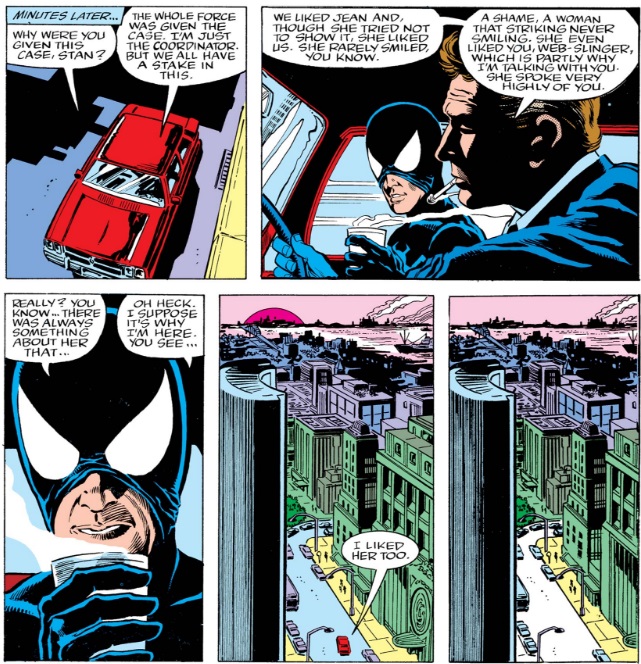 The death of Captain Jean DeWolff is covered in Spectacular Spider-Man 107-110 and it is a dark and gritty story. DeWolff is killed by a serial killer named Sin-Eater who also kills a Judge in front of Matt Murdock and murders a preacher. Peter takes the death of Jean DeWolff personally, not only because she always treated him fairly but because he later founds out, she was actually a fan of Spider-Man. It’s then revealed that Sin-Eater is actually another officer in the police department, Stanley Carter. Peter’s anger at Sin-Eater and violence puts him at odds with Daredevil. The end of this arc comes with Spider-Man and Daredevil revealing each other’s alter egos to each other.

The story doesn’t end there. Marvel does a great job with seeding long term Spider-Man stories. The true ending of the death of Jean DeWolff comes 22 issues later in issue #132 when Stanley Carter is released from a mental hospital after treatment. Spider-Man shows up at Carter’s new house to threaten him, only to find that Carter can barely walk. Carter reveals that in their last confrontation, Spider-Man beat him so bad he permanently caused damage. But in a surprise, Carter doesn’t blame Spider-Man and actually thanks him because if not for the beating, Carter might not have been able to shake the Sin-Eater persona. What follows is a dark tale of Spider-Man coming to terms with the fact that he can do serious damage to his enemies when he fights and doubting himself and Carter trying to keep the Sin-Eater persona from coming back. 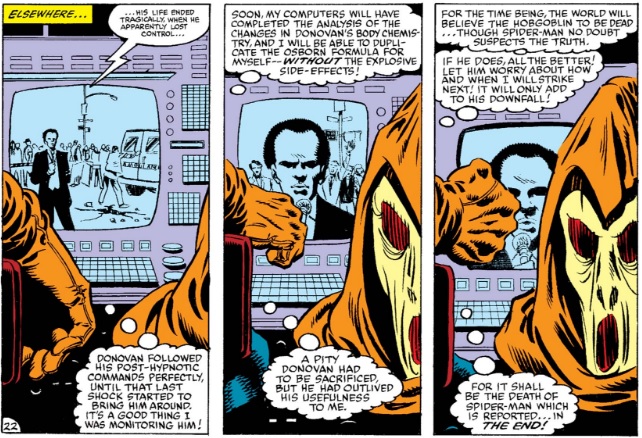 The Hobgoblin doesn’t get enough credit for being a great Spider-Man villain. I’m sure we sold him short in our Rogue War character corner. The mystery of was who the real Hobgoblin is one of the longest, if not the longest, mysteries in comic books. The true identity of the real Hobgoblin wasn’t really revealed until Roger Stern came back in 1997 with Spider-Man: The Hobgoblin Lives. But before then, the Hobgoblin shows up as a sane and much more deadly Green Goblin. The concept was basically: What if Norman Osborn wasn’t crazy and actually had time to perfect some of his more devious devices, formulas and plans. The Hobgoblin proves to be not only a deadly foe for Spider-Man physically but one that could mentally wear Peter down because Peter could never figure out who he was. Due to using brainwashing techniques, we get several candidates that are close to Peter and lead to even more torment for him. Stern eventually reveals that the mastermind behind the Hobgoblin was Roderick Kingsley the entire time. Before then, we see several brain washed people take up the mask:

The end of the Hobgoblin Saga (reveal Ned Leeds) also runs during Gang War, where several criminals try to fill the void left by Kingpin who has disappeared. It’s a great story that shows that the Kingpin is sometimes a necessary evil. Of course Peter doesn’t it see it that way and this once again draws him into conflict with Daredevil who is going with the lesser of several evils in helping the Kingpin. 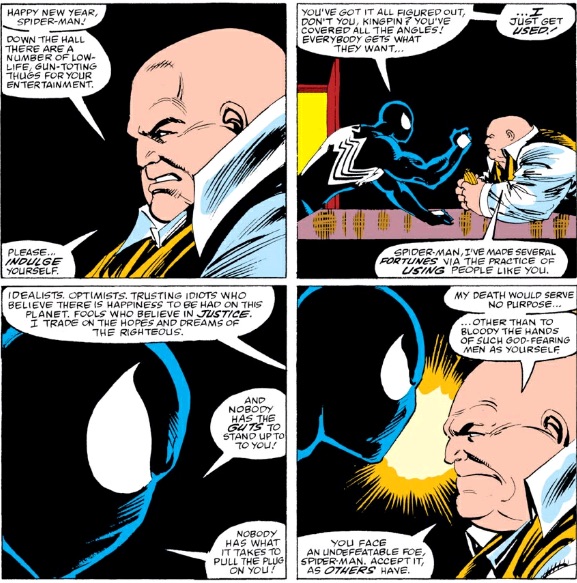 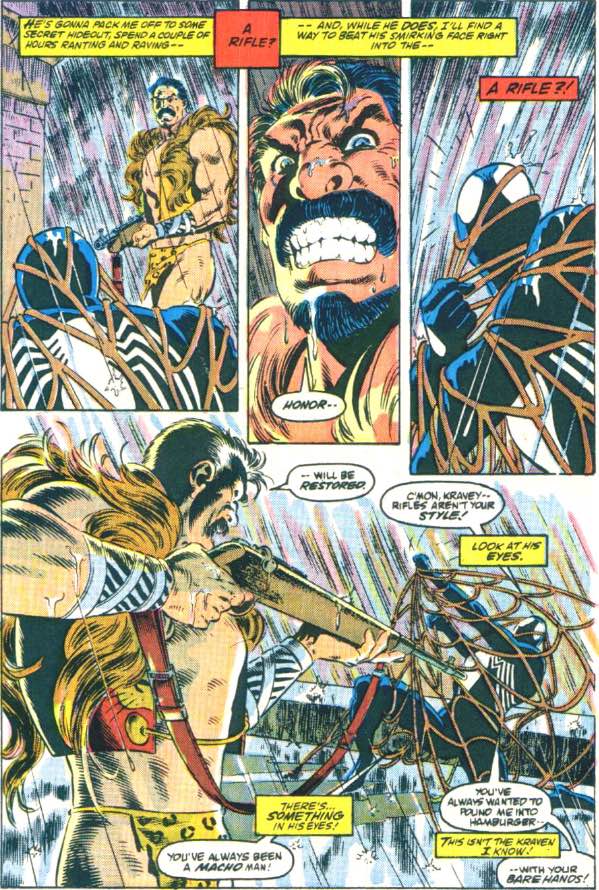 This is probably one of the best Spider-Man stories ever told. If you love Empire Strikes Back because “the villain wins” then you should love Kraven’s Last Hunt. Simply put: Kraven wins. Kraven defeats Spider-Man, “kills him” then puts on the suit and captures Vermin single handily, something Spider-Man couldn’t do. When Peter is revived 2 weeks later, Kraven has found peace. Kraven no longer wants to fight Spider-Man, telling him that he’s already defeated him then became him, proving to be superior. Kraven then takes his own life, going out believing that he is superior to Spider-Man. But this story is also a great character dive into Peter Parker. There are some great panels where Peter embraces the fact that while being Peter Parker is a weakness, it’s also where he gets his strength. 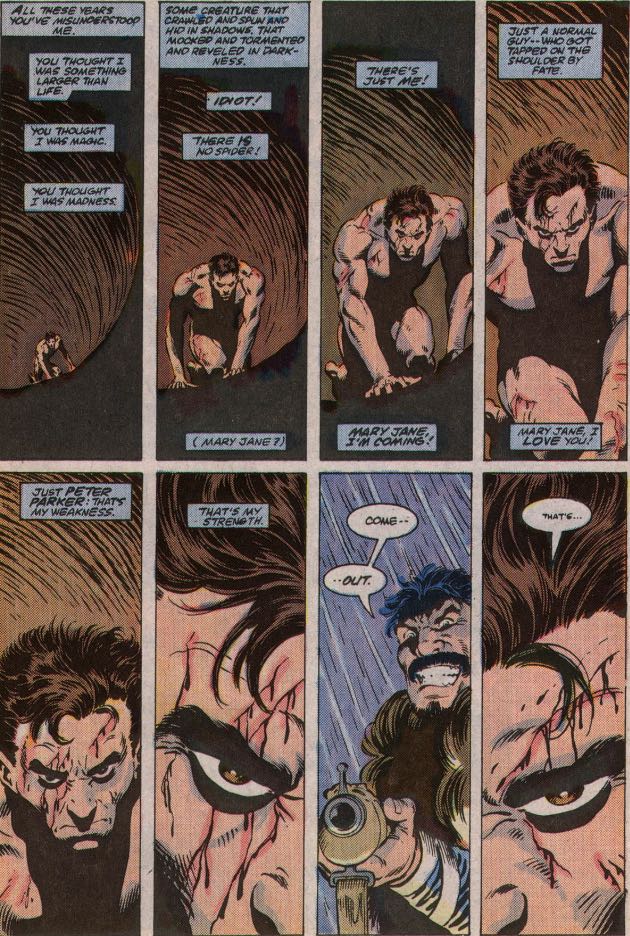 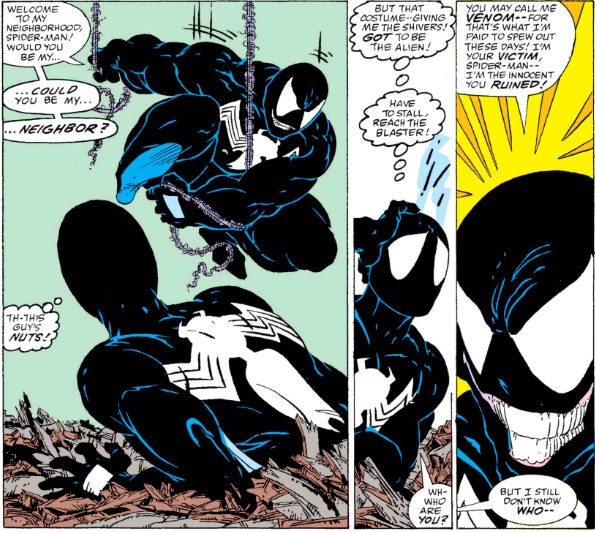 We end with the appearance of the alien symbiote and eventually Venom. Amazing Spider-Man #252 is the first appearance of Peter in the black alien costume. The origin of this costume wasn’t released until a few months later with Secret Wars #8 when Peter finds the costume after being kidnapped along with other heroes and villains by the Beyonder. Now there’s sometimes a little confusion about how long Peter actually had the Alien costume. In issue #258, Reed Richards and the Fantastic Four reveal to Peter that the costume is actually alive and help him to remove it. While the symbiote is stored at the Baxter Building, Peter does end up wearing a black costume that looks exactly like the alien one. But that’s from Spectacular Spider-Man #99 when Felicia (Black Cat) makes Peter a costume based off the alien design. In Web of Spider-Man #1, the costume comes back and tricks peter into putting it on. That’s where the infamous scene of Peter removing the costume using the sounds from the bells ringing in the bell tower comes from. Peter continues to wear the non-alien black costume up until Venom shows up in issue #299-300 and scares the life out MJ. We’ll cover more of venom and the symbiote in a future character corner but you can listen to more on the Rogue War episode we did.

So now we have 300 issues of Amazing Spider-Man in the bag. Next time we’ll take a bit of a break from comics and go into discussing Peter Parker in other media (cartoons, live action movies, etc). Stay tuned and make sure you check out the list of comics we read below.