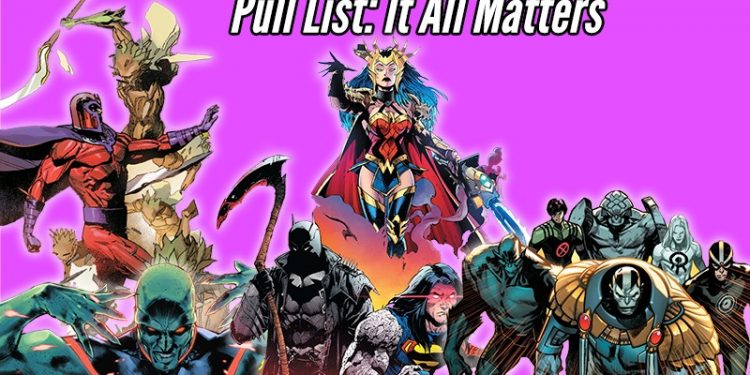 It’s that time again…time for another episode of the Pull List one the Character Corner podcast. Kriss caught up on what Scott Snyder did on Justice League and is doing with his anti-Crisis Crisis, Dark Knight Death Metal and we have thoughts.

Outside of the DC & Marvel super heroes, Power Rangers remains great and if you haven’t been reading the Star Wars books you’re really missing out. Seriously, you can’t call yourself a Star Wars fan and not be reading what’s happening in those books. The third Darth Vader series from Marvel continues the trend of great Vader books. This current one is set right after Empire Strikes Back and well, Emperor Palpatine is an asshole.
Over at Marvel, it’s X-Men everything. The X of Swords event is heating up but  . If you’re an X-Men fan you should be scared of what Hickman has up his sleeves. We’re slowly catching up on everything but one thing is clear: The X-Men are back. Every X-book is great and a must read. We're nervous because things are going well for the X-Men and X-Men stories always in with tragedy so we're now worried what's coming next (Nimrod is inevitable and yet we haven't seen any mention in a while).
And then there’s DC. Look, we’re hard on DC because well…we’ve been hurt before (see our live action movie rants). However, we’ve been overall pleasantly surprised by what they’ve done with Rebirth. What Scott Snyder has done the last year or so with Justice League and now Death Metal feels like finally someone is talking back to the leadership at DC and saying “all our history should matter and we should embrace it”. The conclusion of Death Metal and the fall out with Future State is very exciting. The problem is, there are still hints that the problems at the core of DC are still there. Like why when Snyder rolled off of Justice League to do an event that is literally destroying the DC multiverse….the Justice League book continued on with a new creative team like nothing was happening. At least now we're taking two steps forward and only one step back. That's still making progress.
Like what you hear? Subscribe so you don't miss an episode!