North Carolina – Battleground State Republicans Shot Themselves In The Foot In 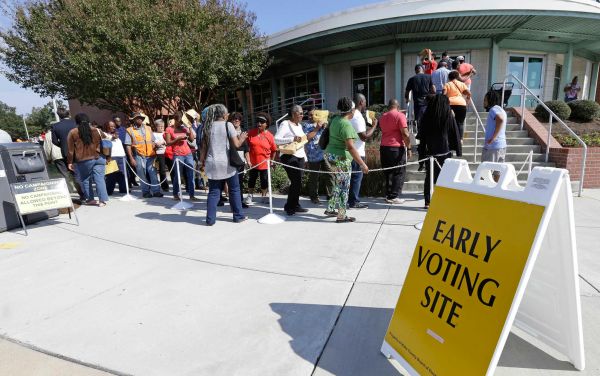 North Carolina is not your prototypical battleground state. In fact, North Carolina has been, historically, as steady a Republican state as you can find. Since 1964, North Carolina has been carried by a Democratic only 3 times: by Lyndon B. Johnson in 1964, Jimmy Carter in 1976, and Barack Obama in 2008. Essentially, extreme circumstances were necessary for North Carolina to go blue: a sitting president that inherited the office after the assassination of President Kennedy, a Democratic candidate running after the resignation of President Nixon and the fallout from Watergate, and a political buzzsaw by the name of Barack Obama, the country’s first black president. Those instances aside, Republican have been able to rely on carrying North Carolina relatively easily. Much of this is a result of the legacy of slavery that the state inherited and upheld for decades.

North Carolina has been on the frontlines of the fight for voting rights. North Carolina was one of the southern states that, following reconstruction, legalized disenfranchisement of black people through Jim Crow laws that required poll taxes, literacy tests and other hoops for black people to jump through in order to exercise their voting rights. Much of that was curbed with the passage of the Voting Rights Act of 1965. Section 5 of the Voting Rights Act is particularly important in terms of making sure that counties and states had to seek “preclearance” in order to make any changes to voting rights due to their discriminatory history.

North Carolina quickly jumped into the void created by passing a voter ID law, that is widely considered to be the most strict in the nation. The law targeted black communities, “with almost surgical precision” according to the Fourth circuit of the United States Court of Appeals. The law required that individuals seeking to vote must present a valid state ID (and restricted the student IDs that would be accepted), the law also stated that individuals could not register to vote on Election Day, could not register to vote before they turned 18, drastically cut early voting throughout the state, and stated that the ballots of those who mistakenly voted at the wrong polling place wouldn’t be counted.

The law was struck down in July by the Fourth circuit Court of Appeals. Its passage was a clear message sent from the state government, “we don’t want you to vote”. It would be easy, when your own government is making it hard for you to vote, to simply pack in it and not vote.  But what we’ve seen in response from those communities has been amazing. As of October 26th, 812,000 people have already voted in North Carolina. The belief is that Hillary Clinton currently leads Donald Trump by up to 22% among those that have voted early.

So, what exactly has happened to make North Carolina a battleground state and one that Democrats can win? Donald J. Trump.

The Trump effect is working overtime in North Carolina. In a state that is 30% black and latino and 51% female (three demographics Trump definitely hasn’t won favor with), Trump hasn’t been able to extend his reach enough to truly be a legitimate candidate in a state that he must win. Couple that with a Governor that helped to energize a state politically with a controversial bathroom bill that has lost the state hundreds of millions of dollars in revenue in a Presidential election year and you have a clear picture as to why Republicans are in trouble in a state that they should be able to easily win.