Nightingale Review: A Girl and Her boy Sing a Song of Vengeance in Jennifer Kent’s New Horror Film 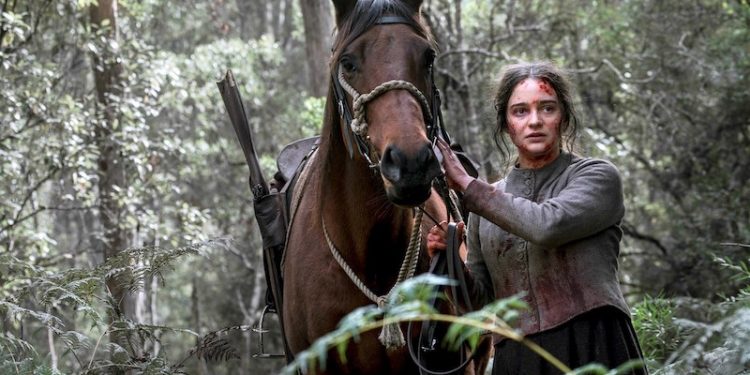 Ro7
Shanna6
Brandon7.5
6.8
Nightingale is a revenge horror flick that is arguably just as exploitative as its predecessors from the 70’s.  And even then, it can’t help but spotlight the same glaring cinematic talents of director and writer Jennifer Kent that made The Babadook such a fresh take on horror films.
The story follows Clare (Aisling Franciosi), a 21 year old convict in the early 1800s Australia awaiting her overdue freedom who survives horrible acts of violence against her and her family.  Unable to return to the woman she was, Clare seeks retaliation against her attackers, a threesome of soldiers lead by Lieutenant Hawkins (Sam Claflin), with the help of an Aboriginal named Billy (Baykali Ganambarr).  Over the extended 2 hour running time the tale of Clare and her Boy dillydallies between themes of violent revenge, the stages of grief, surviving the odds, foolish pride, and inhumane prejudice.
After watching I Spit on your Colonization, you’ll understand why anyone would have a hard time sitting every vile act this film dumps on your head.  As a person of color you’ll find it next to impossible to not grind your teeth down the gum through at least two thirds of the leads' jarring bond.  The film while as well acted, suspenseful, and beautifully shot as could be can't help but juxtapose the dualities of oppression experienced by its two leads in favor of Aisling's character.
Treating actual human beings like property in the face of an anti-hero who is afforded some semblance of civility despite her rough predicaments left much of this story feeling like it couldn't help but paint this picture in broad white strokes.  And for all the accuracy in its depiction of the brutal and cowardly nature of men, the imagery still holds a few blindspots when giving a voice to its properties of color.
Listen to our spoiler-free discussion of Nightingale and decide for your self if this is a leap you’re willing to take.
Like what you hear? Subscribe so you don't miss an episode!