In a society ruled by an anti-science government, beholden to innovation that's only worthwhile if it makes generates profit, what is a scientist supposed to do? For scientist Christina Ocampo, the solution is sex. 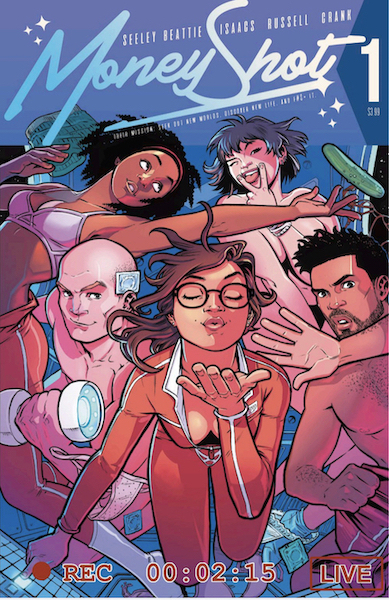 The first issue of the series is told mostly through flashbacks to how the Star Shot project was started. Despite making contact with alien races, Earth was deemed too much of a shit show for aliens to hang around. Because there's no political will to explore space and redeem Earth's standing in the universe, scientists have abandoned space exploration and Ocampo and her team are stuck writing grants that go unfunded. Although her unlikely idea funds their research, it's obvious that not all of her colleagues are completely on-board with her solution for the project. Physicist, Dr. Bree Wander, seems to have an axe to grind with Christina and her former lover, Dr. Omar Steinberg is also a part of the team. The personal and professional lines are clearly blurred and as the series goes on, those issues will be sure to take center stage against the backdrop of space exploration and sexy shenanigans.

Sarah Beattie's art is sexy and lush without feeling pornographic. It's amazing how a series about scientists having sex with alien creatures doesn't feel as overtly sexual as some superhero comics I've seen. And while there are plenty of sex jokes to be had, the book focuses on the absurdity of the situations rather than T&A. Money Shot is a funny, timely comic that I can't wait to see more of.

New Comic Book Day (NCBD) is a chance for us to recommend new comics or graphic novels that you may want to read. Let us know if you find a new comic you love. Hit us up on social media.