Shanna8
A dark, gothic drama that seems far more fit for a winter release but no matter its release date, this is a film worth seeing
8

Fox Searchlight's My Cousin Rachel picked a curious time of year to head to theaters. The dark, gothic drama seems far more fit for a winter release but no matter its release date, this is a film worth seeing. Starring Rachel Weisz as the eponymous Rachel and Sam Clafin (The Hunger Games) as her cousin/lover, Phillip Ashley, the film based on Daphne du Maurier's novel, is a deep, psychological thriller set in old world England.

Clafin's Phillip is an orphaned young man who was raised by his uncle Ambrose (also played by Clafin). Phillip has a close, somewhat isolated, relationship with Ambrose who goes to live in Italy due to his ill-health. Through a series of letters, Ambrose tells Phillip about reuniting with and falling in love with his distant cousin Rachel. As the relationship progresses, Ambrose falls ill and also becomes paranoid, blaming Rachel for his ill health. 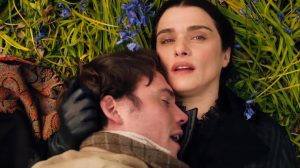 By the time Rachel comes to visit the Ashley estate, Phillip has branded her a murderess despite the fact that Rachel was left out of Ambrose's will and he himself has inherited the estate. But what the naive Phillip isn't prepared for are Rachel's charms and he also finds himself drawn to her like his uncle. Throughout the film, it's never known if Rachel is manipulating Phillip or if his infatuation and naivete are the perfect combinations for Rachel to achieve her ends. Also since Phillip's possessive outbursts mirror Rachel's stories of Ambrose as he unraveled, the audience is left wondering if it's the Ashley men who suffer from an unhealthy bout of misogyny and if their need to control the beautiful, independent Rachel isn't their real ailment.

The tension between Clafin and Weisz keeps the movie tautly wound. Rachel vacillates between sinister, terrified and cunning while Phillip is a boy playing at manhood. His godfather and financial advisor played by Iain Glenn (Game of Thrones) tries to temper Phillip's impulses but when Phillip yells, "I'm 25, I can do what I want!", his childlike, impetuous nature undermines the adulthood he claims. Rounding out the cast is Holliday Grainger, as Phillip's godsister, Louise, an erstwhile love interest. Phillip's obsession with Rachel is neatly juxtaposed with his inability to see Louise's infatuation with him. In fact, adding to his immaturity, before Rachel, Phillip is shown as wholly uninterested in women.

At the film's end, the audience finds itself wondering the same questions as Phillip. Did she? Didn’t she? Who’s to blame? Rachel lays bare all of Phillip's shortcomings but also instigates his transition from a child to a man. If she is to blame for anything, it's failing to not make the same mistake twice.

My Cousin Rachel is theaters now.