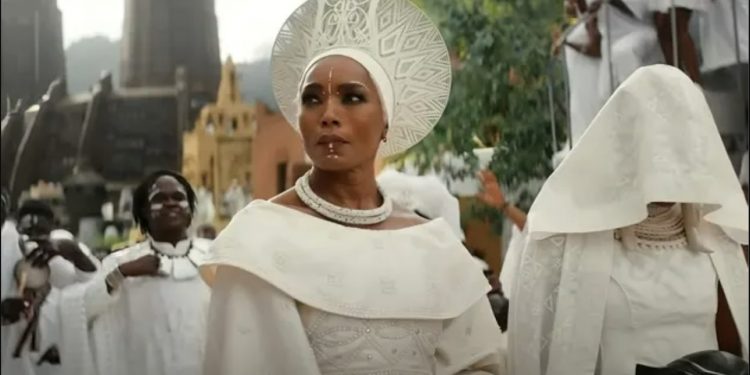 Writer/director Ryan Coogler leans into the expansive chronicles of Black Panther, offering a treatise on grief and renewal. Brace, because Black Panther: Wakanda Forever wastes no time diving into the death of King T’Challa. By starting with a frenzied Shuri (Letitia Wright) struggling to save her brother, Coogler offers a path forward that only begins in grief. With one of the most evocative and sincere openings, Wakanda Forever gracefully grounds itself in pain and hope. It's a moving tribute to a ruler, and a man. Chadwick Boseman was a vibrant person who backed up his charisma with a deep well of talent. So how do you move a franchise centered around such a towering figure like his T’Challa forward? By respectfully acknowledging the loss and guiding people to remember that in Wakanda death is never an ending. This isn’t the return to Wakanda anyone wished for; but it's the one we now need.

In this world irrevocably changed, a bereft Queen Ramonda (Angela Bassett) and a bitter Princess Shuri, must lead the council of Elders and the Wakandan people forward. But the kingdom’s no longer secluded enough to allow deep mourning to the exclusion of all else. Just like in the real world, melancholia’s only part of the landscape. So Wakanda Forever must offer more than catharsis. Thankfully, Boseman was just one player in a stellar ensemble capable of ensuring the center holds. No one will ever replace him; but that’s partially the point.

Coogler drives this home early with Queen Ramonda and the Dora Milja demonstrating their intent to honor its fallen King’s legacy and stand undaunted. The narrative firmly establishes the nation-state’s position on colonizers and the West's rabid duplicity. It’s a fiercely resonant and revelatory throughline in every act. So much so the complexities and nuances of the isolationism/protectionism storyline that follows may be lost on the unwary.

For some, this tonal shift may feel like a step away from the intensely standalone feel of Black Panther. However, introducing the Black Panther was never about fan service for Black audiences. It's just our good fortune to have talents like Ruth E. Carter and Hannah Beachler involved. The costumes and production design is a vibe; oozing respect for culture and heritage. Even as this sequel makes it understood the kingdom of Wakanda doesn’t operate outside the greater cinematic universe.

Coogler and his co-writer Joe Robert Cole weave the stages of grief into an interrogation of Wakanda’s agency with a more expansive worldview. Black Panther ends with King T’Challa unveiling the nation-state’s true might. Wakanda Forever begins a reckoning with the fallout - intended or not - from that decision.  And with it comes a new juggernaut: Namor (Tenoch Huerta Mejía), known as Kukulkan to his people, ruler of the underwater kingdom of Talokan.

Namor blames Wakanda for putting his people at risk. He demands recompense. It’s a savvy, if slightly bloated, story arc showcasing how to root genre fiction in compelling truth. Through Namor the (actual) annihilation of Central and South America’s Indigenous kingdoms comes center stage decentering western historical narratives.  Their motivations, though similar, are not the same. And to a Wakanda already wrestling with “friends” more interested in conquest, his first veiled threat sets the Wakandans and Talokanians in opposition. The overall impact is a lively story straight through to the climax. Thankfully Wakanda Forever doesn’t rush the backstory reveal.

Coogler’s approach to comic story mechanics remains uniquely suited to navigating its varied moving parts. The beauty of Coogler’s style means even macro MCU elements are mere set pieces (although perhaps too many) in a rich cultural fabric and world-building rather than an overwhelming narrative focus. So, using Wakanda Forever to debut Rhi Rhi Williams (Dominique Thorne), makes sense. For the cynical, it’s “product” churn, but for genre fans it’s about building continuity. The established world adds depth through new story arcs. The world of Wakanda was never intended to exist in a vacuum. Pretending otherwise is just being contrarian about the subgrenre’s inherent interconnectedness. And at the end of Phase Four, it begs the question: why are you here if how superhero narratives are designed to explore/expand still bothers you? Here, the execution’s occasionally unwieldy; but it is an intriguing dueling narrative. One designed to logically weave into existing MCU threads and another that widens the universe to include the great expanse beneath the sea.

The simplistic view is to accuse Coogler of “ignoring the true enemy” in exchange for pitting two nations of color against one another. But those less inclined to ignore that comics are rooted in the world outside our window, such distrust is reality. Plus, if the intent is to draw on the Atlantean storyline in the source, a conflicted and combative relationship between the kingdoms needs a rational basis. If the film has a weakness, it's the same as in Black Panther. Some of the VFX and Weta works against the action sequencing.

Despite its shortcomings, Wakanda Forever is a spectacle of color and visual delight. Coogler’s commitment to character development continues as recognizable figures, like Lord M'Baku (Winston Duke), Okoye (Danai Gurira), remain central to the narrative’s pivotal moments. It’s almost an embarrassment of riches that trying to detail would only lead to spoilers. But it must be said, Angela Bassett is masterful and deserving of all praise.

There’s a thoughtfulness in Wakanda Forever’s quiet that colors the dialogue with emotion. It creates a different kind of humor, reflectiveness, danger, and makes space for a young Princess to rage, grieve, and rebuild her shattered sense of purpose. The end result is a spectacular series of lessons in how to carry on without leaving vital pieces of the self behind. And if you expect Wakanda Forever to spend an ounce of capital caving a certain vocal faction, you underestimate Ryan Coogler. -- 3.75/5

Listen to the Kriss, Brandon and Ro discuss Wakanda Forever spoiler free on Movie Trailer Reviews now. And keep an eye on the feed. You know we'll be gathering for a spoiler chat in the near future...