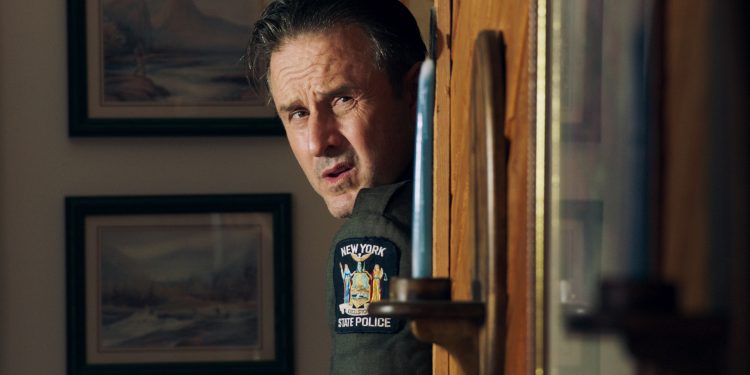 Ro5.5
Mob Town has solid cast but it's weak script and story development hinders the drama
5.5

Based on true events, Mob Town is about the notorious 1975 meeting of all the heads of the Mafia crime families in upstate Apalachin, NY. Told through the eyes of a New York State trooper (David Arquette) banished to the boonies for refusing to turn a blind eye to mob activity, Mob Town is a straight-forward march to the main event with a touch of vintage flavor. If you like mob stories, you'll recognize more than one name.

Directed by Danny A. Abeckaser this story unfolds around the Ed Croswell (Arquette). Coswell uncovers the Mafia's plans to have a sit down in his small town.

Despite it seeming clear that Abeckaser has more than a passing familiarity with the mob movie genre, this script doesn't fully realize the tension stumbling onto a gathering of the Mafia's leadership should. The broader story, intended to establish a connection to Arquette's Ed Croswell, skims the surface on too many of the secondary characters. Given the details available, this story need more meat on its bones.

This crime drama is a little light on details those unfamiliar with the relevant mafia figures. It relies too heavily on a sardonic tone and a wink and a nod at criminality. The 1950s look sets the correct mood but without more than Arquette's attempts to woo Natalie (Jennifer Esposito) and his frustration that no one takes his investigation seriously, when the action begins to happen Mob Town fails to earn it's pay off.

The film is atmospheric despite it's obvious budget constraints and, at turns, awkwardly engaging. But, Mob Town frequently unravels too unevenly to make best use of its performances. There's unexpected humor, great costuming, and just enough edge to carry you through to Croswell's happy ending.