Kriss7
Continues the long honored Fox tradition of striping the X-Men of any X-Men identity.
7

I will be that guy.

I know that puts me at odds with the hundreds of critics who are heaping praise on this movie but I feel that at least I’m being honest.

Now, with that out of the way, I also don’t think Logan is a bad movie. Truth is, when it comes to their X-Men movies, I think Fox has put together a pretty solid list of movies in the X-Men franchise and that includes Logan. I might not like them as X-Men films, but as movies, they’re mostly well put together and well-acted. The only truly bad movies are X-Men: Last Stand, X-Men Origins: Wolverine and X-Men Apocalypse. After X-Men: Apocalypse, fans of the X-Men film series should be happy to see Fox get back on track. 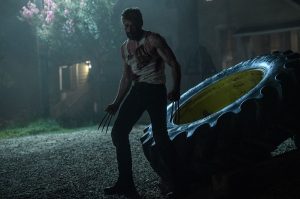 The problem with the critical praise of Logan is that most of it just doesn’t seem genuine. We can’t have an honest conversation about the problems with Logan (that are systemic with all of Fox’s X-Men films) because too many critics are using Logan as a way to indict other super hero films. If your love of Logan is that it doesn’t “feel” like a super hero film then maybe your problem is just that you do not like super hero films. This is like taking a fantasy adventure like Lord of the Rings and complaining that there is too much magic, mystical creatures & elves and that instead it would be better as a dark grounded comedy set in future New York. Maybe as a dark comedy, it would be good, entertaining movie but it would also no longer be Lord of the Rings. For almost 17 years and nearly every movie they’ve made, this is what Fox has done to X-Men and Wolverine. This doesn’t necessarily make them bad films but it also doesn’t make them good X-Men films either.

And that is what Logan is. On its own it’s not a bad movie. It makes a decent enough Western in a way. But Wolverine isn’t a character in a Western. He’s an X-Man and this movie falls into a larger cinematic universe and that’s the criteria by which it should be judged. The Fox tradition of striping X-Men characters of their identity while shoving them into a film that tries hard to not be a super hero film, is alive and well with Logan. Logan feels void of that makes Wolverine an interesting comic book character and instead could just be some randomly inserted character from anywhere.

The biggest problem with Logan is that, once again, Fox is playing cute with where this movie fits in their cinematic universe. Despite the attempts to paint Logan as some singular movie separated from a connected universe, it clearly is connected. I’ve seen claims that cinematic super hero universes mean that there can’t be any real stakes. I think that’s a lazy critique because the same could be said of any movie franchise (Harry Potter, Lord of the Rings, The Hunger Games, etc). So to single out movies based off of comic books, a medium that built off of connectivity between properties, seems odd. Fox’s refusal to be definitive about the timelines of their movies doesn’t change the fact that Logan is connected to a cinematic universe. 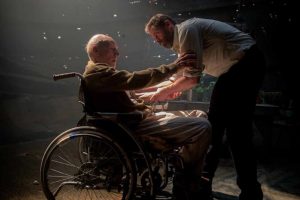 Imagine if in Harry Potter and the Deathly Hallows Part 2, we suddenly were time jumped 15 years into the future. Harry has given up magic and is working as a cab driver in NY to help save money to buy a boat. He’s taking care of an aging Dumbledore that is so ill he suffers seizures that cause him to unleash powerful magic that he can’t control unless he’s heavily medicated. Also, no new wizards have been born in the last 15 years but Dumbledore who is kept locked away for everyone’s safety claims to be in contact with a new wizard. Joining Harry & Dumbledore is a third wizard that was briefly introduced in the previous film which was set almost 50 years earlier. Sound confusing? I bet. Makes you wonder “How did we get here?” I’m sure. No matter how well put together that film is, you’d have a lot of questions. Why did Harry give up magic? Why haven’t there been any new wizards born? How the fuck is Dumbledore still alive? How did that third wizard end up living with Dumbledore & Harry and why is he basically their live-in maid? Without these answers, the movie would be distracting because it’s missing important context in relation to where you left off previously. That’s basically what Logan is.

In order to buy into the settings of this movie with a broken Wolverine with a failing healing factor and a Charles Xavier that isn’t in his right mind, I need to know how we got here. Particularly since the last time we saw Wolverine and Xavier in the future, it was after Days of Future Past and everything seemed to be perfect. There were no Sentinels. The school was filled with young mutants. Storm, Cyclops and even Jean were alive. That was 2023. Logan takes place in 2029. How did we get here?

This isn’t nitpicking, it’s actually a legit issue with the story telling. You can’t tell a story that is the third in the series and play fast and loose with how it connects to the previous movies. Not just from a continuity point of view but also because the emotional weight of Logan’s plot is dependent on events that we know nothing about and haven’t been set up in any of the previous movies. Remember, Mangold’s last Wolverine film ended with a teaser for Days of Future Past. So how do we get to this point in Logan?

The entire plot of Logan is dependent on three things:

I’m sorry but I’m going to need some background and context considering Days of Future Past gave us a happy ending and saved mutant kind’s future. This is like reading the beginning and end chapter of a book with no understanding of the middle. No matter how good that last chapter is written, as a story, it’s not going to make a lot of sense. Did the X-Men die because of something a sick Charles Xavier did? Was it because of a disease/virus developed by Dr. Rice? Who knows because this film never answers a single question.

Even attempting to connect the dots on your own is difficult because there does not seem to be any rhyme or reason to how the story in Logan connect to the larger X-Men franchise. Caliban was first introduced in last year’s X-Men: Apocalypse (set in the 80’s) ever so briefly. Now he’s in a movie that’s almost 50 years later and Wolverine trusts him enough to watch Charles Xavier? Again, this relationship isn’t earned and therefore when it inevitably leads to tragedy, the emotional connection just isn’t there. They could have easily included a character that Wolverine had significant interactions with in previous films. But that's too much like right.

But this isn’t the worst example of Mangold and the writers just pulling from the X-men cinematic universe with no thought of consequences. The most egregious example is the fact that the adamantium bullet from X-Men Origins: Wolverine makes an appearance in this film. Not just an appearance but it's implied to be the same bullet from Origins. Come on. We’ve just spent the last few years pretending this movie didn’t exist and now here we are and it’s brought back into the continuity causing even more problems with making sense of the X-Men world. This was just unnecessary.

Continuity matters and until Fox definitively states what is and isn’t, giving them a pass for it is foolish. Forget being true to the comic book source, Fox refuses to be true to its own cinematic universe source and established canon and that’s a huge knock against any film they put out until they address it. 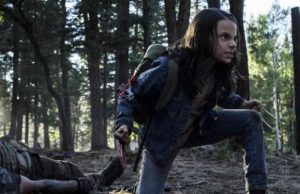 Action-wise, the film is an improvement on what we typically see in X-Men films. No more implied violence with Logan’s claws. You watch limbs get ripped off, claws going into people’s faces and lots and lots of blood. Most fight scenes are still way too close and quick cut to really get a true picture of what is happening. Bad wire work and Wolverine fighting less like Wolverine and more like an old grizzled Hugh Jackman are still an issue. But Dafne Keen as Laura/X-23 is a much welcomed improvement. Where Wolverine has suffered for 17 years not fighting as a trained ninja/fighter with enhanced senses and abilities, X-23 fights like the Wolverine we’ve always wanted. Honestly Keen is the best part of this movie and I’d actually be interested in seeing a Mangold film with Keen returning as Laura.

A common complaint for super hero films these days is the lack of good villains. Well, in Logan there is no villain, just cannon fodder. The Reavers are Reavers in name only and their deadliness is muted to the point where they’re just there to be cut down. Boyd Holbrook plays Donald Pierce, a name that should be recognizable to fans of Wolverine in the comics but don't really get your hopes up. He doesn't really pose much of a threat and quite frankly, gets annoying after a while. There’s a bigger “threat” introduced by the end of the movie but it's really just lazy. If this film really cared about the universe Fox has built, they could have easily made the villain Mr. Sinister since he was introduced (in name only) at the end of X-Men: Apocalypse. There was a direct line between that scene and the creation of X-23. Or at least there should have been. Instead we get Dr. Rice (Richard Grant) and well, he really doesn’t bring anything to the film other than being a recognizable name (to some) from the comics but that’s about it.

At 2 hours and 17 minutes, this movie feels dull at times between action scenes. Again, because of the mess of a timeline, I just didn’t feel the emotion pull and connection the scenes between moments of action were trying to land. Truth is, at times it feels as if it’s trying too hard to be emotional and it comes off as forced and cheesy. The film is way too long and should be cut down to less.

Some say Logan is a "love letter to fans". I disagree. It feels like a retirement party for that co-worker who worked really hard most of his career but coasted the last few years. Everyone was just waiting for him to retire so that someone new could take over. Logan feels like Fox giving a parting gift to Hugh Jackman, thanking him for 17 years of service as Wolverine. I don't think Jackman’s Wolverine is the Wolverine we deserved but it's the only one we've had. I think we should have gotten better but that's no fault of Jackman who put his heart and soul into what the character was written to be. He never half assed it and for that I'm grateful. But I’m also interested in seeing what the future holds. Fox has leaned heavily on Jackman’s Wolverine the last few years (Even throwing in a pointless Weapon X detour in X-Men: Apocalypse). I’m hoping they don’t now turn to Ryan Reynold’s Deadpool as their way to skirt by with mediocre films while everyone else looks at the one shiny object.

I think it’s pretty clear to most people if they want to see this film or not, despite what anyone says, myself included. Here are the types of people I think are wondering about Logan and if I think they’ll want to see it: