The first trailer for Life made it look like a rip off of the first Alien movie. There was a group of people in space, laughing and joking at a table then things go terribly wrong later on when one gets too close to a new alien life form. After seeing the movie, that is an unfair comparison. Life is far from an Alien rip-off and is instead an entertaining (and short) addition to the space horror genre.

The trailers for this movie really do it no justice and that’s probably so that too much isn’t spoiled. Runtime is listed at 1 hour and 47 minutes but it feels closer to 90 minutes. With such a short runtime and quick pace, the trailers really couldn’t show too much without giving away the movie. The trailers make this seem like your typical space alien horror film where humans accidentally discover an alien life form then act stupid. However, the film is really about a group of scientists on the International Space Station who are trying to capture and study a probe returning from Mars that they are hoping contains evidence of life. They find what appears to be a small single cell organism (that is named ‘Calvin’ by some students back on Earth). They quickly learn that the organism is more than it appears as it starts to grow and eventually breaks free. What thing follows is the crew trying to follow failsafe procedures to contain Calvin and keep it from making it down to earth.

Life works on several levels. First, the cast does a pretty good job of making you care about their characters even though most get very little screen time. Jake Gyllenhaal is one of the most underrated actors in Hollywood. He instantly becomes whatever role is put in front of him. His character, David Jordan, has been in space longer than any previous human being and its later revealed that he just doesn’t want to go back home. Ryan Reynolds is usually criticized for never being serious and always playing himself in his roles but as Rory Adams, I really feel like it worked for him. Of course he has his jokes but it adds a much needed balance to cast. Ariyon Bakare plays Hugh Derry, the lead scientist. As with most lead scientists in this genre, he gets careless and reckless but they do a great job of explaining his motivations. On Earth he’s confined to a wheelchair and this opportunity is a chance for him to not only “fly” but presents him an opportunity to study something that might give a boost to stem cell research and cure the incurable.

If there was one downside to the cast is that the female characters, Miranda North (Rebecca Ferguson) and Ekaterina Golovkina (Olga Dihovichnaya) weren’t given the same presence as the male characters.Ekaterina is the commander of the space station but still doesn’t really have any moments outside of being the commander to latch onto. Even Sho (Hiroyuki Sanada) had the birth of a child as motivation for his character. But Miranda and Ekaterina really have nothing. Which is a shame because next to Gyllenhaal, Ferguson is the co-lead of the film. That’s not to say that their characters don’t get anything to do. There’s a exhilarating sequence with Ekaterina on a space walk while fighting off Calvin. But it would have been nice to get more personal moments with these characters as well. It’s an unfortunate oversight in an otherwise entertaining film.

The most important cast member though is one that doesn’t get billed: Calvin. This was the most innovative design for an alien life form I’ve seen in a long time. Calvin starts off looking like a harmless amoeba then grows into something much larger and harder to describe. You will NOT be prepared for what Calvin becomes and looks like. Even better, beyond just being a mindless killing machine, it becomes obvious that Calvin is an intelligent life form. The way Calvin escapes the containment unit shows problem solving skills that you would never associate with something that (at that time) doesn’t have a face. The way it moves, thinks and attacks will have you at the edge of your seat. 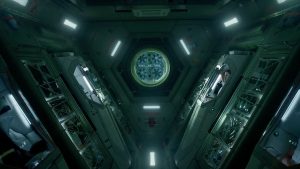 The setting of the film also adds to the horror in Life. This isn’t some distant future where there’s artificial gravity and space marines. The crew of the ISS is stuck in zero gravity with an intelligent creature that is stalking them. Beyond just Calvin, they have to deal with maintaining their orbit, surviving in a damaged space station, not freezing to death and how, if ever, they’ll get back to Earth without Calvin escaping.

Life is a surprisingly entertaining and good Sci-Fi horror film. I went in with managed expectations but came out absolutely thrilled by what I watched. Anyone who wanted a great Sci-Fi horror film in 2017 won’t be let down by Life.