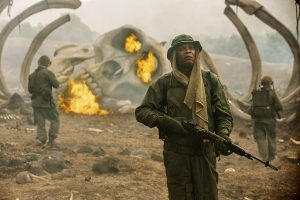 Kong Skull Island is the film that the 2014 Godzilla film should have been and is the monster film we deserve. I grew up watching just about every Gozilla and King Kong film I could. Yes, King Kong is super problematic and extremely racist. Even the 2005 Peter Jackson film, which was received positively by critics, still maintained the same racial overtones that have always plagued the mythos. So I was a bit worried about Kong Skull Island. Could they take the concept of Kong and Skull Island and steer away from the problematic elements? Well, the answer to that is not just “Yes” but “Hell Yes”.

The other worry I had was whether this film would also starve the audience of actually seeing Kong. Gareth Edward’s Godzilla is one of the greatest teases of all time. For most of the movie, the audience is only given fleeting glimpses of the titular character. There are times when there is a giant kaiju battle and the camera either cuts away or only focuses on the human characters. Kong Skull Island has none of that.  From the time Kong shows up, facing down helicopters disturbing his home, he remains a constant and visible presence in this film. 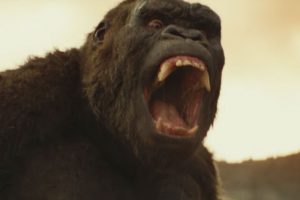 Where Godzilla was a side character in his own film, Kong really is the focus of this film. The film uses a more the classic, 1933’s look for Kong with him as a bipedal creature versus him being just an oversized gorilla. That classic look was then updated using motion capture to make Kong's movements and behavior more realistic. Not only does Kong looks and move realistically but he has facial expressions and battle scars that make Kong feel like an actual character and not just CG addition.

Even better, Kong isn’t the only monster on the island. The full scene with the giant spider briefly seen in the trailer is terrifying. The “Skull Crawlers” are not only a threat to the human characters but pose a legit threat to Kong as well, setting up for some pretty amazing action scenes.

The weakest part of this film is probably the two lead characters Mason Weaver (Brie Larson) and James Conrad (Tom Hiddleston). Weaver is a Pulitzer Prize winning anti-war photographer who gets assigned to photograph the mission to survey the island. Conrad is ex-SAS and currently a tracker who is brought on to help the survey team survive the jungle. Neither serve much purpose to be honest. I think the film wanted to unravel some of the problematic things about King Kong but at the same time didn’t want to have an all-male film. Weaver doesn’t feel like a damsel in distress in this film which is a good thing. But I can’t help but wonder why the characters of Weaver & Conrad couldn’t have been combined into one female character. Weaver could have been a wildlife photographer & tracker and it would have eliminated Conrad’s character which doesn’t do much

The supporting characters in this film, particularly the soldiers, are the most interesting and fun human elements of this film.  The setting of the film automatically adds a built in connection to these characters, feeling like Platoon or Apocalypse Now in places. The soldiers are veterans of a Vietnam War that is ending and they’re literally one day away from going home. They just need to complete what should be a simple escort mission for a group of scientists and then they can go home to their kids, mothers, wives, etc. They’re naturally easy characters to root for and want to survive. Samuel L. Jackson plays Colonial Preston Packard, their commanding officer. He quickly becomes the Captain Ahab of the film, wanting to seek revenge on Kong for killing his men. His men then become conflicted between following orders and their desire to survive and go home. 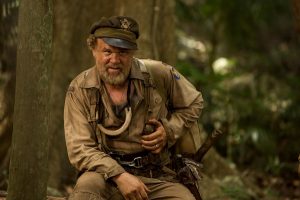 John C. Reilly adds some humor to the film, as one would expect from his appearance in the trailer, but he also adds some seriousness and deference as well. His character, Hank Marlow, is a World War 2 pilot that ended up crashing on the island. I was a bit worried from the trailer that he would be too much comic relief, but Reilly does a good job of using humor to break tension. There are plenty of times when the audience might laugh or chuckle, but the character is dead serious.

The rest of the cast serves their person. I almost want to call them forgettable but they serve a purpose. The number of people who die by either being stepped on, smashed, eaten or pulled apart then eaten is sure to make the audience happy. This film is deadly enough that you're relieved that anyone is able to get off the island alive.

This film really feels like a love letter to fans of King Kong, Godzilla and other monster films. While this film is the second in Legendary’s MonsterVerse, it feels more like the proper beginning of that world than 2014’s Godzilla did. My hope is that Legendary forgets that first film and makes 2019’s Godzilla: King of the Monsters and 2020’s Godzilla vs Kong follow the timeline of this film.

Kong Skull Island is proof that a film that centers on a giant CG character with just supporting human characters can be good. There are a lot of talented actors in this film that in the end, just don’t end up doing much or mattering. Yet the film not only survives that but thrives off of it. When you leave this film you’ll be satisfied not only with what you saw but also excited about the possibilities of the MonsterVerse.