Movie Review: ‘Infinite’ is what happens when you don’t sci-fi 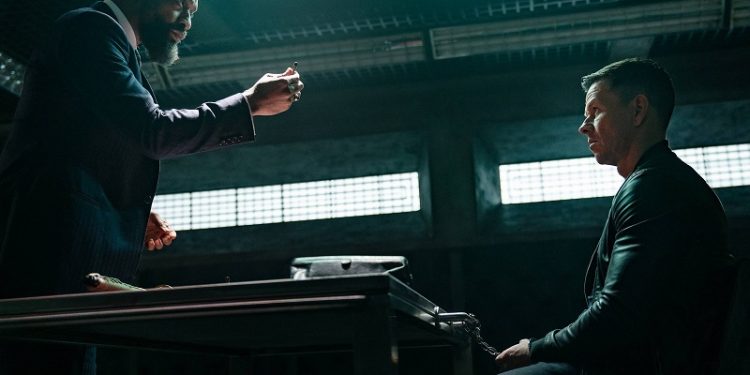 Ro2
The flaws and shortcomings in this script should’ve been obvious the second the decision to have a disembodied Mark Whalberg narrate any part of the story happened. This weirdly edited, chaotically paced story pushes hard to give everything a sense of urgency, what it doesn’t ever do is create a cohesive narrative worthy of the potential in the premise or Chiwetel Ejiofor.
2

If you’ve read D. Eric Maikranz’s book, it’s better to say Infinite is inspired by his concept of reincarnation rather than based on its story. That should’ve been a good thing. So, I don’t know what happened between the decision to turn Maikranz’s The Reincarnationist’s Papers into Antoine Fuqua’s sci-fi action film Infinite and crafting the screenplay, but the final product leaves its clear franchise hopes in serious doubt.

Todd Stein’s screen story had good bones. People born with the ability to recall all their past lives diverge into two factions that disagree about the role of the reincarnated in the world. Infinites who believe they have a duty to try to leave the world better than they found it, and Nihilists painfully disenchanted with the perpetual cycle and now want to end everything, literally.

And yet, Ian Shorr’s screenplay centering Evan McCauley (Mark Whalberg) as "the chosen one" who must remember what happened in a past life so the Infinites can stop the Nihilists from ending life on Earth is bogged down by trite dialogue, uneven character development, poorly thought out story dynamics, and painfully thin-ass world-build. Given that The Reincarnationist Papers relies heavily on bringing diary entries to life on the page, it makes zero sense that a plot built around secret societies full of deeply conflicted personalities with dangerous philosophical differences barely amounted to an haphazard race against the clock story on screen. The sheer number of personality types and characters available should’ve resulted in a vivid origin story that smoothly segued into multiple movies or even a television series. Pairing Maikrnz’s theory of reincarnation with a tale of sects of ancient warriors carrying some next level friends-turned-enemies baggage, practically oozes with dark fantasy film potential. Unfortunately in Infinite, all that potential remains unrealized.

Right out the gate, Shorr 's script fails to clear the low bar set by Wanted to provide an understanding of the secret societies and their rules. If there’s a “why” in need of answering, Infinite either leans into the most boring of tropes or changes the subject altogether. Shorr ignores the spiritual, replaces the mystical with the scientific, and never misses an opportunity to reach for low-hanging character motives...that then either go unexplored or are laboriously over-explained. And sadly, Fuqua's direction is too haphazard to competently pull off Infinite as any sort of fully actualized visual narrative.

Infinite opens with a high speed chase as three “infinites” hurry to escape with an item, called the egg, designed to end life on Earth. This intrepid trio are desperate to keep this world-ending device away from its creator, infinite-gone-rogue, Bathurst (Chiwetel Ejiofor). It’s an adrenaline-fueled race through a bland Mexico City that ends in flames and a death-defying leap by Dylan O'Brien’s character Heinrich Treadway. But the opening sequence does nothing to orient the story in time. There’s too much that happens off-screen for the short bursts of conversation to adequately set up more than the in-the-moment character dynamics.

Shorr’s unwillingness, or inability, to invest in building out the characters in this world and embracing its mythos, dooms Infinite to reading like Fuqua's poorly executed thought experiment. The scene composition and visuals effects also make little impression. It’s swiftly clear most of these shots exist simply to be available for some later juxtaposition; which is always a bad sign story-wise. So, neither the look nor feel of Infinite is ever cinematically satisfying.

It Shouldn't Be Possible to Be This Infinitely Bland

The story shifts to the present (which is indistinguishable from the past), and focuses on Wahlberg’s Evan McCauley, a diagnosed schizophrenic, doing his damndest to rebuild his life after a stint in a mental facility after an episode made his condition known. McCauley’s struggling to get people to see him rather than his mental illness. Unable to get a new job in the hospitality industry - one of the few scenes where there’s more show than tell - McCauley’s living hand-to-mouth using his innate skills (like ancient sword-making) to peddle goods on the black market to in exchange for the antipsychotics that keep him from dissociating or slipping into what he’s been taught to believe are psychotic delusions.

Through clunky flashbacks narrated in a way that reveals Fuqua recognized this script lacked depth, clarity, and cohesion, we learn that McCauley’s also a multi-talented savant in ways not easily dismissed as delusions and hallucinations associated with schizophrenia. This is where his backstory journey should begin to unfold. Unfortunately, the choice to undercut the supernatural and supplant it with a second act that amounts to a lot of yadda yadda and infers that the mentally ill are all somehow dangerous means there’s no real connection between what's been shown and what’s to come.

Because as the trailer gave away, McCauley isn’t schizophrenic with a past of suicidal ideations. He's actually recovering past life memories and it’s vital he recall his most recent life as Heinrich Treadway and remember where he hid the doomsday device before Bathurst and the other Nihilists, find it and end all life on Earth. There’s plenty of action and fighting and insane amount of data-dumping conversations but hardly any storytelling's going on. Of course, Wahlberg being exceedingly unfit for a role that requires nuance does little to help sell the character.

Plus, so little reason to suspend belief and invest in these characters only works to highlight all of Fuqua's signature moves; especially the ones you fervently wish he’d retire.  From the start - and directly through to the end - Fuqua's direction makes little sense. So little it’s easy to catch all the flaws in the fight sequences, massive plot holes, and editing jumps that destroy any building intensity. Despite a solid ensemble, Fuqua offers a paint-by-numbers love story with a resolution anyone can spot ten miles away, philosophical discussions that do little to unravel the relationship between pivotal characters or offer any real glimpse into the inner workings of either faction, and a glaring inability to translate the magical onscreen. Infinite aims high visually and misses the mark so often it stops being disappointing and simply becomes expected.

Had Fuqua looked to a film like Memento - that certainly knew how to meld voiceover with a heavy side of flashback sequences  and non-linear storytelling to unfold into an irresistible tale - as a touchstone, this would be a discussion about how  Infinite is invigorating installment in the action genre more akin to The Old Guard. But alas, this film falls prey to the same deficiencies that ultimately doomed Assassin's Creed; poorly thought out plot devices in lieu of actual story development.

Neither director nor screenwriter trusted that the audience would invest in the main character and boy does it show. Infinite is barely worth enjoying the train wreck let alone getting upset at its wastefulness.

Infinite moves fast but not fast enough to gloss cover up the fact that 1) the most interesting character is supposed villain Bathurst and 2) had they centered this film around Bathurst, his loss of faith and embracing nihilism it wouldn’t have been necessary to make the utterly ableist move of reducing McCauley’s character to “he’s not metally ill, he really is special.” Wahlberg has a particular set of skills as an actor. And yet directors persist in relying heavily on self-deprecating humor, and entirely too much voiceover before segueing to fight scenes rather than remember the man’s not entirely without emotional range. It gets old, quickly. For those who've read the book and followed McCauley's struggle to understand himself and desperate desire to find people to belong with, Infinite is an example of what happens when filmmakers aren't interested in what makes sci-fi/fantasy work on any level.

Chiwetel Ejiofor’s Bathurst is a character in need of proper context and focus. His motives are rooted in pain, bitterness, and conceit that’s practically tangible. But his entire storyline lacks proper grounding because this writing is woefully lacking. I was left wanting to know more about him and continually pulled out of the action by the painfully obvious solutions to his desire to “end it all” that made his performance feel overdone rather than unhinged yet heartfelt. Not shifting the story to center on Bathurst and building this story around a man so destructively disenchanted might be Infinite’s most unforgivable sin.

What could’ve, and should’ve, been a gritty involved tale of warring factions of perpetually reincarnated souls, the Infinite and the Nihilists, locked in an existential struggle with the fate of the world hanging in the balance is instead, the shallowest of globetrotting action flicks built on questionable VFX choices, poor character development, and lackluster worldbuilding.