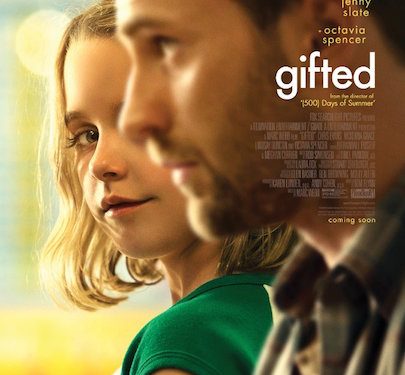 My journey with this movie started over two years ago. In March of 2015, by chance I happened to attend a live reading of the Gifted screenplay through The Black List. While listening to the actors read aloud (at the time the lead role was being read by Armie Hammer), I was most impressed with the wit of the script. There were moments, even in the reading, where the script was laugh out loud funny. And those moments are crucial to the story because at its core Gifted is a story about a man fighting to hold on to the one thing in his life that makes sense, his niece. 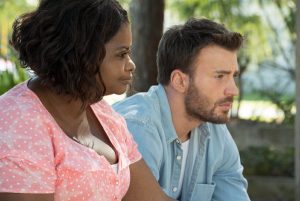 Frank Adler, played by Chris Evans, is an acerbic, closed-off man who’s taking care of his precocious, equally acerbic niece, Mary. They live in a small house in Florida and their closest companion is their neighbor, Roberta (Octavia Spencer) who watches Mary every Friday night so Frank can go out drinking and have a “life”. But really his whole life is Mary, played by the sweetly sarcastic, McKenna Grace. Grace read the role of Mary at the Black List event and I thought she was perfect for the role. Mary is a math prodigy like her mother but to keep her from suffering the same fate as her mother, Frank is determined that Mary have a normal life. She is strong-willed and kind of a smartass but in her vulnerable moments, she’s a little girl who knows she’s different, and doesn’t understand why. Her closest friends are Roberta and a one-eyed cat named Fred, so when Frank sends her to school to be “normal” she immediately sticks out like a sore thumb. Mary’s teacher Bonnie, played by Jenny Slate, recognizes the child’s genius and wants to help her but inadvertently brings attention to Mary that leads her grandmother Evelyn (Linday Duncan) to their hideaway seeking custody.

Although it seems like the plot to a sappy, Lifetime movie, Gifted manages to sidestep the sap and give true moments of warmth and sadness. Frank is not a nice guy, but he’s also the best guy. His guilt about not being able to help his sister, is funneled into his love for Mary. And even though he’s doing what he believes his sister would have wanted, his greatest fear is that he’ll fail to cultivate Mary’s humanity. Evans is perfect in this role. Frank is a former playboy, philosophy professor who grew up in Boston so basically alternate universe Chris Evans. His boyish handsomeness makes him sympathetic and relatable and he plays Frank perfectly as a man out of his depth but also clearly the right person to raise this child. Jenny Slate, who is known for her comedy, takes on a more serious role as Mary’s teacher. It’s easy to see how she would fall in love with Mary’s cleverness and with Frank’s devotion to his niece. Octavia Spencer rounds out the cast as Roberta. Although we don’t get much of her backstory (to be honest, you don’t find out much about anyone other than Frank and Mary), it obvious that her connection to Frank and Mary is deep. I think it’s helped by her personal relationship with Evans. Their communication is heartfelt and effortless. 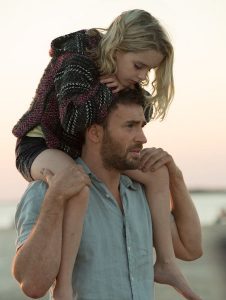 One character that was fleshed out since I heard the original screenplay was Evelyn, Mary’s grandmother. As the story progresses, you realize that part of her motivation for pushing Mary and her mother, Diane, is because she was never able to fulfill her own aspirations. It gives her character more depth and sympathy. She not good but she’s not altogether bad either. Though Mary may struggle to connect with people because of her genius, her grandmother struggles to connect because of her ambition and it’s a rich, parallel the story can draw on.

I’m sure many people will flock to the theater to see Chris Evans in one of his few roles where he’s not dressed as Captain America and there will also be a lot of press because this is the film where he and Jenny Slate started dating but as someone who truly enjoys this story, I hope that people will walk away having enjoyed the time they spent with Frank and Mary. I know I did.