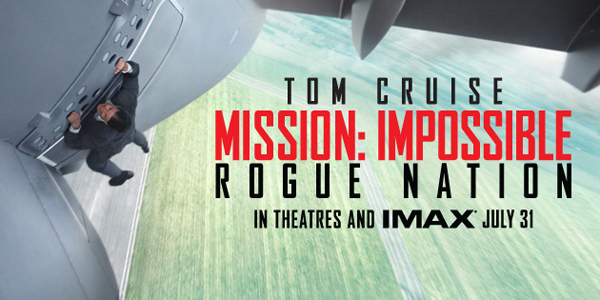 I'm in.  The only thing missing from this teaser is a clip of the patented "Tom Cruise Run" but I get it...you gotta save something for the full trailer.

*EDIT* After watching again I was wrong.  We DID get a quick look at "Tom Cruise Run".  It's official...I'm all the way in.

In “Rogue Nation,” Ethan and team take on their most impossible mission yet, eradicating the Syndicate – an International rogue organization as highly skilled as they are, committed to destroying the IMF.

Helmed by McQuarrie (The Way of the Gun, Jack Reacher), the new Mission: Impossible movie stars Tom Cruise, Jeremy Renner (Marvel’s The Avengers, Kill the Messenger), Alec Baldwin (The Departed, “30 Rock”), Simon Pegg (Star Trek, The World’s End), Ving Rhames (Pulp Fiction, Dawn of the Dead), Simon McBurney (The Last King of Scotland, The Theory of Everything) and Rebecca Ferguson (Hercules, The Red Tent) and features a screenplay by Will Staples and Drew Pearce.