CBS and WB TV have found their lead for the upcoming Supergirl TV series. 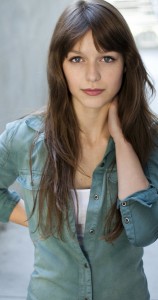 Benoist is best known for playing Marley on Fox’s “Glee” since Season 4. She has also made appearances on Showtime’s “Homeland,” CBS’s “The Good Wife,” and NBC’s “Law & Order: SVU.” She also starred in the movie “Whiplash.”

On the CBS series, Kara escaped Krypton amid its destruction years ago, hiding the powers she shares with her famous cousin, Superman, since arriving on Earth. But now at age 24, she decides to embrace her superhuman abilities and become the hero she was always meant to be.

I really don't have much to say about this.  I've never seen Benoist in anything so I can't judge her acting abilities.  I've heard some rumblings about what this show will be like, but I'm not really too worried.  I've enjoyed DC's offerings on TV recently and I'm more than willing to give it a shot and see what it does.  As I've said for a while now, all these new comic book movies/TV shows aren't going to be hits or something I'll enjoy.  But I'll give them a shot.