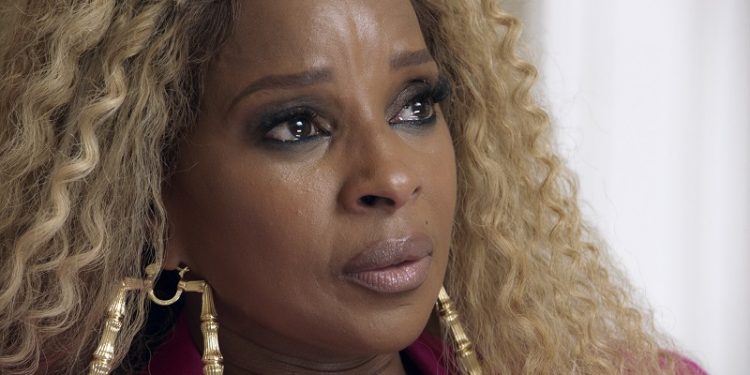 Ro5.5
There’s plenty of taking stock and honesty but don’t expect Mary J. Blige’s My Life to ever offer an unguided tour into the singer’s psyche.
5.5

In the modern Hip-Hop/R&B era, a strong case can be made that Mary J. Blige’s My Life is the penultimate album confessional. Released two years after her genre-blending debut What’s the 411, My Life became the best-selling R&B album of 1994 and solidified Blige’s coronation as the Queen of Hip-Hop Soul. But for singer/songwriter Mary J. Blige, her most influential project, was a cry for help. In Mary J. Blige’s My Life Blige takes a beat to reflect on what went into making what she still calls “her darkest album.” Many fans would (and do) attest, My Life pulled them through some of their darkest hours.

Oscar-winning filmmaker Vanessa Roth followed Blige as she performed the tracks from My Life live for the first time for the 25th anniversary. Parts of that footage, interviews with friends, colleagues, and collaborators, and a  colorful, mix-media driven, use of archive footage offer a peek into Blige’s early career and what it took to bring My Life into being. But it’s clear from the outset that Roth is not in charge of this process. Blige staunchly keeps the narrative narrowly focused on the album and her state of mind at that point in time.  The interviews are rarely incisive and the most moving anecdotes are from fans espousing their love to Blige. Roth's inability to move Blige beyond her comfort zone leaves he mission of a documentary largely unfulfilled. What she does do successfully, is highlight how lyrical honesty and song creates lasting ways for people to connect.

Usually the worry for a new artist is that the follow-up release won’t be as successful as their debut. But Blige’s real life struggles overshadowed any such concerns about a sophomore slump. For the soul singer, the whirlwind of rise to the top, substance abuse, and an extremely volatile relationship with K-Ci of Jodeci had taken its toll and thrown her into a traumatic downward spiral. She poured her angst, pain, and despair into songs. The resulting album, My Life, went on to be the best-selling R&B album of the year and solidified Blige’s coronation as the Queen of Hip-Hop Soul. More importantly, it created a connection, through pain, between Blige and her fans that enabled her to find a reason to not only keep living, but learn to push through and thrive.

If you’re a fan of Mary J. Blige, listening and watching as some of the genre’s innovators revisit one of their pivotal creations is appealing. Just don’t expect anyone to share more than the broad strokes about the process of turning Blige’s struggles into song. No one’s breaking any confidences in Mary J. Blige’s My Life. This really is about looking back at the album that changed how Black artists offered their message to the masses and gave generations of Black women a voice for their pain. My Life was a moment and this documentary makes it clear that even 25 years later, its songs and those lyrics keep resonating with the public...and its creator.

Blige’s recollections of her life in the projects and how her experiences shaped her offers a glimpse into the mindset of a young woman unaware of her gifts. Her obvious reluctance to share the more harrowing aspects of her formative years speaks to the lasting nature of her pain and makes it obvious that healing is a never ending journey. Learning why a talent like Blige saw music as more of an escape instead of a career to aspire to is a revelation. So while the details of her past trauma remain closely guarded, Blige’s willingness to admit to a mounting sense of image-crushing hopelessness gives this 82 minute album retrospective the same blunt authenticity that feels very Mary J. Blige. There’s plenty of taking stock and honesty in this behind-the-scenes rewind but don’t ever expect Mary J. Blige’s My Life to offer an uncensored tour.