Marshall doesn’t center on a well-known case from Thurgood Marshall. Instead of going with a more well-known case like Brown vs Board of Education, director Reginald Hudlin centered the film on Connecticut vs Joseph Spell. Spell was the chauffeur/butler for Eleanor Strubing a wealthy white socialite. Strubing claimed that Spell attacked her, raped her then attempted to kill her by throwing her off of a bridge. Spell was charged and faced up to 30 years in prison. Marshall took the case and a lot was riding on his success, not just for him personally, but for the movement of civil rights as a whole.

Due to blatant racism and bias, the judge in the case bars Marshall from speaking during trail forcing Sam Friedman to question witnesses and make the case. This could have easily watered down Marshall’s story and turn it into an almost “white savior” type film. But Hudlin smartly crafts a film that shows the strengths of Thurgood Marshall even when a judge takes away some of his greatest strengths.

It’s hard not to draw parallels to events today where white men of power use that power as a weapon to silence those calling for justice. Hudlin purposely put together a film that would draw the parallels to today’s climate and resonate. The audience isn't as familiar with this case and it turns the film from a typical bio-film into more of a legal thriller. I was able to interview Hudlin and actor Chadwick Bosemen about the film Marshall back in July. Since then it’s been almost scary how some of the conversations had during the interview, relate to current events and the vitriol shown towards activists fighting for Civil Rights 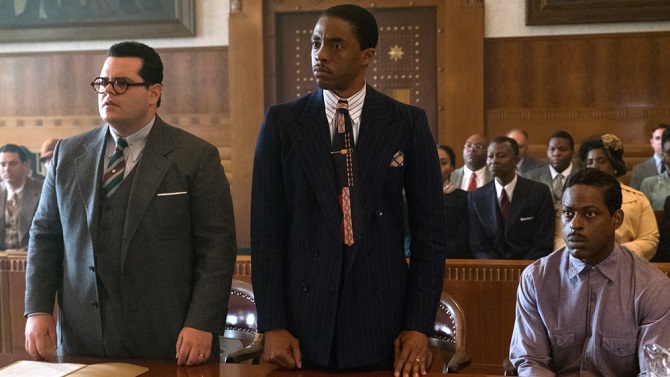 Hudlin: There’s a kind of weariness that people have when you say you’re doing a cradle to the grave film. So I said, let’s not make that movie. Let’s make a legal thriller that would be exciting if the lead attorney was Joe Smith. So we said, this is an exciting case and a case where most don’t know the outcome. With Brown vs Board, a lot of people learned that in 5th grade. And so many of the themes of this film are still very relevant now with the biggest theme being  “you don’t have to be a saint to not be guilty” which is the issue with every police shooting now. You know the “well he’s no angel”. So I just felt that this case spoke to today and had an outcome that the audience didn’t know.

Boseman: The moment that I read that he was gagged is the moment I knew I wanted to do it. There were other hurdles to get over but I knew that I wanted to do it. I picked up the phone with my agent and was like “this is pretty good.” To me the fact that he was gagged made it different. It creates an obstacle. It’s like fighting with your hands tied behind your back. And in this case it's almost literally, because for Marshall, his voice was his weapon. If you take away the thing that he normally uses then he has to win by playing the coach or mentor. You actually know more about a person’s character from the obstacles they overcome. So I felt like it was the best possible problem and best possible conflict he could have. Although from a literary standpoint I try to avoid calling him a mentor because he’s still the lead of the movie. It’s still his story. And I say that because a lot of times you have these stories with a black character and a white character where the black should be lead but because of how Hollywood works, the white character somehow takes over the movie and marketing and all the aspects that should go to the black character. So we were very mindful of that as well and I felt like it was a great challenge to try to play the movie gagged. And acting is not about talking it’s about living. You know more about a character from what they don’t say than what they do say.

Hudlin: Chadwick and I talked about this a lot. In addition to being about Thurgood Marshall, the film is also a meta-commentary on that genre of film-making. Because very often Hollywood does make these movies where there’s this white character and you ask “why is that character there?” But in this case, this was a historical fact and it was an exciting challenge. We both saw it the same way. This makes it a movie about Marshall that you don’t know what’s going to happen. Once you say he can’t talk, you then have the audience asking “so how does it work? What happens?”

The first time the audience sees Thurgood Marshall enter the courtroom, the camera focuses on a mural that is right by the doorway in the back of the room. The painting is of Colonials attacking and selling Native Americans. Hudlin explains how the mural to white supremacy ended up in the film: 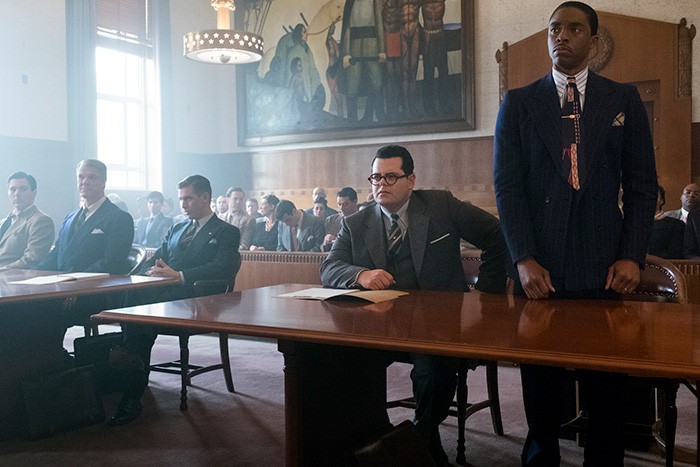 Hudlin: That painting was not there[in the actual courtroom]. But it’s a mural in a real post office. What’s interesting about these old buildings is that you see these monuments to white supremacy and monuments to prejudice. And I kept thinking “this is immortalized? This is horrible”. Someone used their artistic talent to celebrate this. So I wanted to create that atmosphere for the film. This is the room that you’re in. This is what they’re celebrating and espousing and that’s what he has to fight.” And the fact is, even though it wasn't originally in a court room, it was still in a federal building.

How Sybrina Fulton, Tracy Martin and Benjamin Crump Ended Up in the Film

Hudlin: We were already shooting and this scene is coming up and we were thinking about who are we going to cast as the last people we see in the film. We could hire some day players and local actors. But it felt like too big of a moment for that. Then I thought that maybe I could call in some favors and get some big celebrity to come in and play the role. But that didn’t feel meaningful and impactful. Then I thought “What if we got Trayvon Martin’s parents?” Because that would connect the struggle to the right now. Cause the fact is right now we want Thurgood Marshall, we need Thurgood Marshal. We need those warriors out there. So I pitched it to Chadwick and he said “that’s a good idea”. So I called up Benjamin Crump who I met before and I pitched the idea. He loved the idea because no surprise he’s a big Thurgood Marshall fan. And he said “I’ll be Z. Alexander Looby.” And Looby if you’re really a Thurgood Marshall fan was this attorney that worked down south and Marshall said “if I was ever in trouble, I’d call Looby”.

Boseman: And hats off to them for being open enough to do that. Because they’re obviously still dealing with the death of their son. So for them to play that is close to home

Hudlin: We were so grateful for them to come down. their courage and their willingness to keep marching on in the face of unfathomable tragedy it was a real inspiration to the entire crew. It’s one of those things that’s a reminder “this is why we’re doing this”. So we were profoundly grateful for them being there and their presence had a huge effect on all of us.