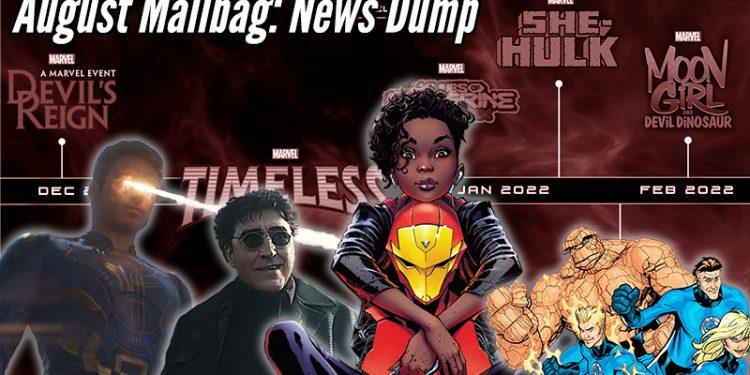 It's time for another Mailbag. This month we didn't get any new listener emails but that's okay since there was a ton of news to talk about. This is the time we usually see San Diego Comic-Con, D23 and other convention news. We had a bunch of much anticipated trailers from Marvel drop (Eternals and Spider-Man No Way Home). We also talk about a trailer we didn't talk about last time in Venom 2. Hey, it at least looks better than the first movie. The Suicide Squad might not have had a big box-office, but its the most watched DC film on HBO Max. Also coming soon to HBO Max, a Black Canary movie. At least that's what's been announced (You know how WB/DC is on follow through).

On the comic side, Marvel has announced an exciting upcoming roadmap that has some upcoming stories that seem to elevate certain characters we might be seeing in the MCU. The Fantastic Four will be involved in The Reckoning War which Dan Slott has been hinting at for 15 years. Kang will be at the center of Timeless. And Jason Aaron is doing a multiverse Avengers. Wonder why.

Like we said, there's a lot to discuss this episode so sit back and enjoy.