Toronto Film Festival: JoJo Rabbit is a Film only Taika Waititi Could Make 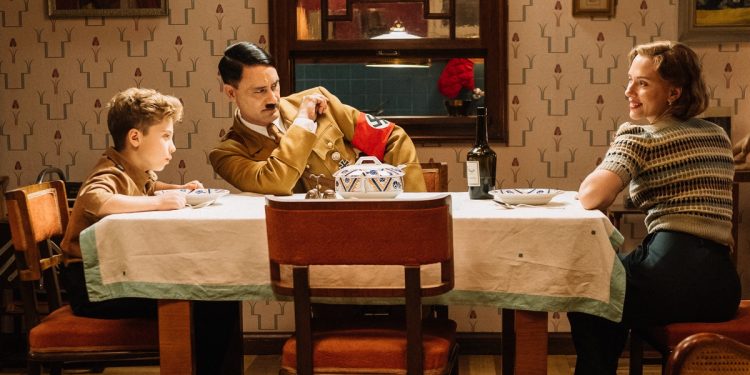 Kriss7
Joi7
Solid performances and the satirical humor and wackiness one would expect from Taika Waititi. But by the end of the film one might feel as though the film is a bit shallow.
7

JoJo Rabbit is the type of satirical film that could only come from the humor and mind of someone like Taika Waititi. The film follows Jojo Betzler (Roman Griffin Davis), a young true believer of the Hitler Youth who has everything he believes in challenged when he learns that his mother Rosie (Scarlett Johansson) is hiding Elsa (Thomasin McKenzie), in a young Jewish girl their home. Waititi himself gets in on the action himself as Jojo’s imaginary friend Adolf Hitler. Waititi really leans into making Hitler look as ridiculous, petty and foolish as possible. It’s a combination of him being a manifestation of a 10-year-old boy as well as Hitler himself being a foolish and small minded man.

This is definitely a film that will have people talking. The Waititi directed Jojo Rabbit took home the People’s Choice award at TIFF this year and there seems to be a lot of differing opinions from critics on it. On the positive side, it is cinematically a good film hitting all the right notes with well shot scenes and great performances. Scarlett Johansson puts in a caring and emotional performance as Jojo’s mother. It’s hard to get a wrap on her character at first but as the film progresses Johansson kicks it into high gear and puts in an emotional performance that is tied to some of the darkest moments in the film. If only she would put in the same level of care and thoughtfulness to keep her foot out of her mouth while doing interviews (First about believing she should be allowed to play any role she wants, even if it takes away from an underrepresented minority actress/actor and then her support of Woody Allen).

The flip side to the positives are a couple of things that I believe keep Jojo Rabbit from being great. The first is the “redemptive arc” for Sam Rockwell’s character, Captain Klenzendorf. Now don’t get me wrong. Sam Rockwell is Sam Rockwell and so he knocks the role out of the park. He’s funny, ridiculous and gives the great performance you’d expect. However, his character is a Nazi and there is a bit of a redemption for him in this film. It’s not a total redemption as there are definitely consequences for him, but I can definitely see how that wouldn’t sit well with some. Plus the overall theme of the film is a young boy who is a Nazi basically learning that Jews are human too. Personally, because the main character is a child, that arc isn't as worrying to me as it is something to expect from a 10 year old. However in 2019 when we're inexplicably STILL dealing with Nazis, I can see how that would be off putting for many.

The bigger flaw with this film is that is feels a bit hollow. For a satirical film about Nazis I was expecting a bit more meaningful zingers and maybe even a bigger message. Instead Jojo Rabbit is relatively straight forward and hits the typical beats of a story about a kid who finds out the world is bigger than what he’s been taught. Nothing is necessarily wrong with that but personally I was expecting a bit more.

You can listen to Joi and I talk about this film in depth on the latest Movie Trailer Reviews podcast episode.