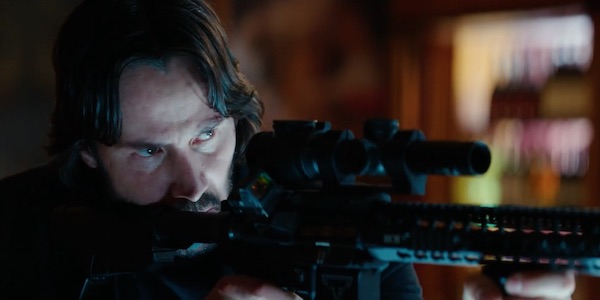 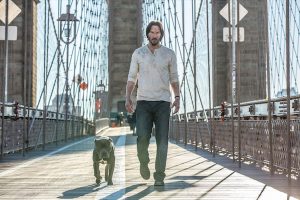 Let’s be honest here. When you get a hit movie out of nowhere, it’s like lightning striking and rarely will it strike twice. When a movie like John Wick that catches folks off guard, the desire to strike while the iron is hot is understandable. Making a movie as good or better than the first film is an uphill battle that is rarely won. Maybe you can’t make a good sequel or franchise out of it, but at the very least you can probably get folks into the theater at least once more.

The good news here is that while John Wick Chapter 2 might not be as good as the first film, it still has enough of the original’s DNA to please most fans.

Director Chad Stahelski and writer Derek Kolstad  were tasked with finding a way to expand the world they established in the first film while still giving the audience the breakneck speed action they loved for the first film. While not perfect, a decent enough job was done of finding a balance.

The first John Wick film enjoyed the benefit of not being on anyone’s radar and having the world’s simplest plot: Former bad ass hit man seeks revenge on the people that killed his puppy and stole his car. It was a linear story that follows Wick being an unstoppable terminator barreling through what seems like an endless wave of henchmen. Obviously for Chapter 2, this kind of plot wouldn’t work. Kolstad couldn’t just kill Wick’s dog again and rinse, wash, repeat. Instead the script for John Wick Chapter 2 revolves around the consequences for Wick’s actions in the first movie. By coming out of retirement, even if it was for personal revenge, Wick is now obligated to fulfil a blood contract owed to Santino D’Antonio (Riccardo Scamarcio), the man who helped set John up to “retire”. What follows is a reluctant Wick taking a contract, the inevitable betrayal and a lot of dead people.

John Wick Chapter 2 is a bit slower to start than the first film. After the initial opening sequence (which to be fair, is high octane classic Wick), the film starts focusing on a lot of plot. I started getting nervous after a while feeling like I was waiting too long to see Wick kill anyone. This was unavoidable as the script was clearly trying to establish enough of a world to sustain at least a trilogy of films. Since the first film was stripped down to the barebones, this film had to pick up some of that slack to establish a world that can sustain a franchise. For instance, we get a better look at some of the services provided by The Continental and why it’s important. While it might not seem immediately necessary to need to see this information, but the end of the film, it becomes clear why establishing what The Continental provides is important.

Where the film falters a bit is that certain elements of the story just don't make sense. D'Antonio's mission for Wick is to eliminate a target that Wick says is impossible to get to. D'Antonio says that's why he needs the Boogeyman to do it. Yet Wick literally walks into the target's room. What follows is another confusing sequence and then Wick walks out. Again, none of what happens leads you to believe that Wick specifically was needed for this. This would be a bigger issue for the film but shortly after the bullets start flying and you're reminded of the first film. It feels as if the pressure to make this a franchise from what was supposed to be a single film, lead to some sloppiness in the writing and unnecessary bloat in the script. It's forgivable for this film but when the inevitable third film comes out, these shortcomings won't be as easy to overlook. 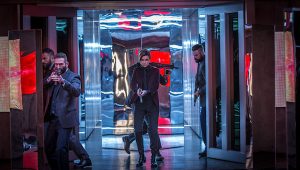 Once the killing starts though, all worries should disappear. The first movie might be better because it doesn’t have as much plot to pick apart but the second movie is far superior when it comes to action. I can appreciate that while Kolstad did add more story and plot, Stahelski as a director didn’t just rest on what was previously done in the first movie. The brutality level is raised to another level. Wick uses more weapons than the first film. Handguns of course are back then there’s an AR-15 and some really brilliantly shot scenes with Wick with a shotgun. But it doesn’t stop with firearms. There is more hand-to-hand combat in this film that is pretty well done. I even enjoyed the fight between John Wick and Cassian (Common) although it’s marred by a ridiculous “falling down the stairs” gag that should have been cut. There’s also a really brutal death involving a pencil, which I appreciate them foreshadowing earlier in the film, that is going to test your ability to keep your eyes on the screen. You’ve been warned.

In addition to the action, the film gets creative with locations. Wick & Cassian have a knife fight on a subway train. There's also a really hilarious "walk & shoot" scene between the two characters that is both enjoyable and ridiculous. The most creative fight is one set in an art museum exhibit with a bunch of mirrors. The scene is a a visual treat and it serves the purpose of showing just how talented John Wick is. 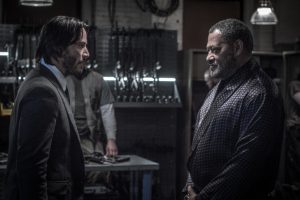 The cast does what they have to do. Keanu Reeves plays the emotionless terminator we expect. The best Keanu roles are the ones where he barely speaks and when he does, he does it through clinched teeth. Ian McShane gets more of a role as Winston, the "manager" of The Continental. Again, his expanded role feels like set up for the next film. Everyone else is just there to either get out of John Wick’s way or to be a victim. Ruby Rose’s Ares can’t even speak and why should she? We know she’s there for the inevitable fight with John, so why waste time with words? The only character that seems out of place was Laurence Fishburne’s "Bowery King". It’s never explained how he became the “Bowery King” or what his relationship is with The Continental and the contracts given out. To be honest, his addition just felt like a way to get a mini Matrix cast reunion.  His character is mostly likely explained more in the third film.

Bottom line, this is a John Wick film. There’s more plot and story here than you probably care about but it’s necessary to turn the film into a franchise. Once you get through that first 20 minutes, you’ll get the action you enjoyed so much in the first film. The end of the film clearly sets up for at least one more film and I don't think anyone will complain.