Christopher Nolan is still undefeated. Memento, The Prestige, Inception, The Dark Knight Trilogy and now Interstellar.  The man is a genius when it comes to writing and directing a movie.

I have a confession to make.  I actually doubted Nolan this time.  I thought there was a good chance that Interstellar would be the first chink in his armor.  I wasn’t very moved by the trailers.  The nearly 3 hour runtime gave me great pause.  I also did something I don't normally do and I let the Rotten Tomatoes score, which is hovering around 70%, creep doubt into my mind. I almost went to see Big Hero 6 instead.  Since we didn’t get any screeners for Interstellar and we missed the Big Hero 6 one and I was paying and watching a movie on my own time, I wanted a guaranteed hit.  I’m glad I stuck with Interstellar.  Not to say Big Hero 6 wouldn’t have also been a good choice but, Interstellar was a very pleasant surprise. 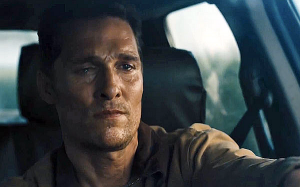 Like many Christopher Nolan movies, the trailer for Interstellar doesn’t give much away and doesn’t do it justice.  On the surface, the movie is a cinematic interpretation of scientific theories on astrophysics, time, space and relativity.  But at it’s core it’s just a simple love story:  The love of a father for a daughter.  It starts off very simply as a movie we’ve all seen before:  The world is dying. A man with a unique set of skills (no Liam Neeson) is tapped to help save it and he has to leave his family behind to go be a hero.  But then it morphs from an endeavor to save the world to a father just wanting to make it back home to see his children.  See, what the trailers don’t convey is that this isn’t Star Trek or Star Wars.  There is no warp or hyper drives.  While this does take place in the future (a date is never really established), space travel pretty much abides by the rules that we currently live by.  It might take you a few months just to travel to another planet in our solar system.   To leave our galaxy, they’re using this mysterious Worm hole that has appeared that will drastically cut down time.  However, this plays a major factor when they get to the other side and realize that time is relative and other planet’s proximity to the singularity means a drastic different in the time on Earth and the time the explorers face.  I was shocked by how quickly they established this dilemma.  I won’t say how much time passes on earth after a short check on the first planet to see if it’s viable for a human colony but it was a huge shock and really changed the dynamics of the mission and the whole movie. It’s then that I began to realize the importance of the first 40 minutes of the film which was basically just set up for Cooper and his family.  It makes so much more sense as the film goes on.  And this realization about time is only the first of at least three significant plot twists in this film.  The film does have some glancing social commentary in this film but its never really harped on in too heavy of a way.  They actually don’t go into too much detail on why the world is the way it is. We know that the people became fed up with government spending too much on wasteful things like military spending and NASA but there is also a food shortage.  It’s to the point that being a farmer is more a move valued and sought after job than being technically gifted and smart.  There’s also talk about how the education system has been changed to deal with this reality to the point of changing some significant moments in history to realign the priorities of kids.  Nolan doesn’t delve too far into these themes but they’re there and help set the stage for the world he built. 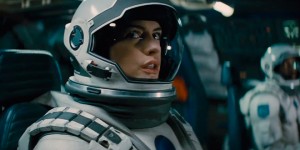 The cast of this film is fantastic.  Matthew McConaughey really is a fantastic actor.  I don’t know when exactly it was that Hollywood realized this because I feel as if he started off as just that guy some women were attracted to and they would throw him in any kind of movie.  But the man can act his ass off.  Anne Hathaway is also great as Amelia Brand.  I really wish I could interview either Michael Cane or Christopher Nolan and find out the details between their relationship.  Cane has been a staple in just about every Nolan film.  It’s easy to see why too, even if he’s not the main focus, his time on screen is always solid.  One surprise in this film is Matt Damon who I did not know was in this film.  I was surprised when I saw him and he gives a great performance as well.  Two people that I want to give special recognition to are Bill Irwin and Josh Stewart.  They aren’t physically in this movie but they lend their voices to the two robots, TARS and CASE.  TARS in particular is the comedic relief of the movie.  He’s an ex-Military robot they’ve re-purposed for this role and to make him more personable they programed his comedy setting to 75%.  I thought Nolan would go with the cliched “robots turn agains the humans” trope but instead both TARS and CASE are pretty damn loyal and become actual members of the crew.  TARS repeatedly has well timed jokes and sarcasm that will have you cracking a smile even at the most tense moments.

Visually, the film looks great.  I didn’t get a chance to see it in IMAX but I’m sure it looks even better there.  Christopher Nolan isn’t a big fan of using green screens and apparently he didn’t use any for this film.  It actually gives the film a very realistic feel to it.  On the ships the film feels very claustrophobic and tight. The film feels more personal that way.  Another thing I love about the way they shot this film, most of the space action is shot in silence. Again, realistic.  Space is a vacuum and there is no sound.  So when you watch this film and you see an outside shot of the space shuttle and the engines kick on, there is no sound.  If there’s an explosion, you see the chaos but hear nothing.  It adds to the dramatics of the scene. 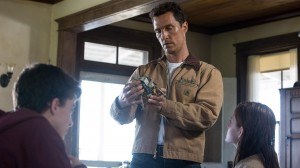 Now this film does have issues, even though I did not find them to be significant enough to take away from it.  First off, it sticks to a particular pattern with Chris Nolan films which is he doesn’t flesh out every detail and leaves a lot for the audience to figure out themselves.  An example of this is when Cooper does decide to help and pilot the space craft, it’s never established how much time took place between then and when they actually blast off.  We basically never get that “training montage” typically seen in these films where you get to learn about the rest of the crew.  While on the one hand I’m glad they didn’t have that scene because it would have made this movie even longer, it does mean that once we’re on the ship, there are 2 crew members on board that I barely know anything about.  I didn’t even really know their names until well into the movie to be honest.  To me this stays with Nolan’s style of putting more weight on what matters more by sacrificing character development of lesser individuals. But I can definitely see how some folks might not like this.  Topher Grace shows up and we’re never really given an idea of who he really is to one of the characters for a good while of his screen time.  Another issue some folks might have is not really the problem with the film.  Much like The Dark Knight Rises there might be some issues with hearing the dialogue during some films.  I think this has to do with theater speakers are great for loud music/explosions OR dialogue but not both at the same time.  Most times when I have these issues, if I watch the same movie at home, I have no problems hearing the dialogue so it’s really hard for me to hold this issue against the film itself.   Still it’s worth a mention.  And lastly, the runtime.  I know most folks are hard pressed to sit in a theater and watch one movie for 3 hours.  Hell, I’m a huge Nolan fan and that 2 hour 45 minute runtime intimidated me.  I’m not sure what could have been cut though.  The film is a slow burn, particularly in the first act but it pays off in the end.  The end makes the slow beginning of the film more appreciated.  But again, it’s nearly 3 hours and that’s a lot for anyone.

Interstellar is a great film.  It’s the perfect blend of realistic science/theory, Sci-Fi and emotion.  If you can sit through the long runtime I’m almost certain you’ll enjoy it.  Christopher Nolan continues his streak of high quality movies.